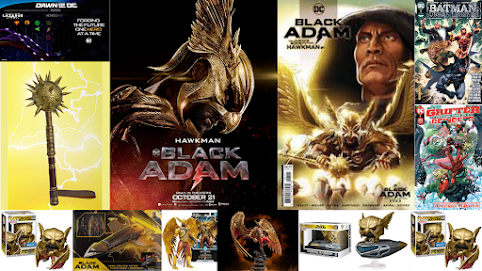 As the Year of Black Adam (featuring Hawkman and the Justice Society) comes to a close, and we soar into 2023, let's take a look at the current situation, what lies ahead, and then a look back.

The Current Situation
I'll be honest. It ain't good. It's been 2 years and 2 months since Robert Venditti's Hawkman series came to a close, and we are still waiting for a new series. Right now, there is nothing that Hawkman and Hawkgirl/Hawkwoman are a regular part of. The new Lazurus Planet event (is it an event?) is starting and there is no indication that they are a part of that, whatever it is. There is a 12-issue Justice Society series going on at the moment, but I've been told that the Hawks will only show up in some brief flashbacks. Judging from The Golden Age and Justice Society issues, it's mostly about Batman family member Huntress with very few Hawks. I've stopped following the series until I hear from other Hawk fans who see something different. I'm sure they will continue to pop up as panel fillers, cameo appearances, and flashbacks; but currently, there is nothing.

What's ahead.
There are currently three things that are possibilities, but nothing specific has been announced. 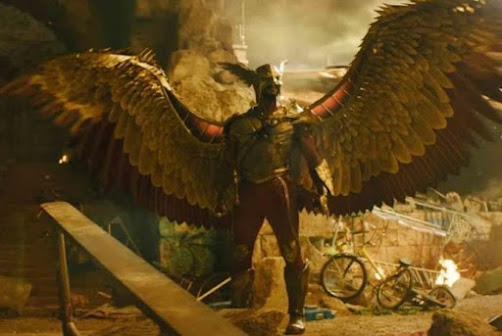 1. Aldis Hodge's Hawkman. The general consensus seems to be that the critics hated it, the comic fans enjoyed it for the most part, and its box office was a disappointment. It fell just short of $400 million worldwide. Personally, I had to wait until December 2 for it to be released here, and while I enjoyed seeing Hawkman on the movie screen for the first time, it had a rather odd anti-climatic feeling to the whole thing. It appears that it came right when new plans were being set out for the DC Universe, and we have no idea if Aldis Hodge will ever wear the wings again. James Dunn is supposed to be announcing his plans soon, so we'll have to wait and see if this version will be tossed aside or brought in for a solo movie (with Hawkwoman of course).

2. Back in the spring, there was a round-robin tournament for fans to choose what new comic series they wanted. Among the choices was a story by Cavan Scoot. It was called Hawkman and Hawkwoman: The Changeling. It was going to be a story about a boy named Hektor (Hector with a k, making him Thanagarian I think) claiming to be their son. The selection was eliminated in the second round but then it was later announced that the story would be in a miniseries later in 2023. Cavan and artist Fico Ossio mentioned it on social media sites, so it's still assumed that it will happen. No dates have been announced yet. 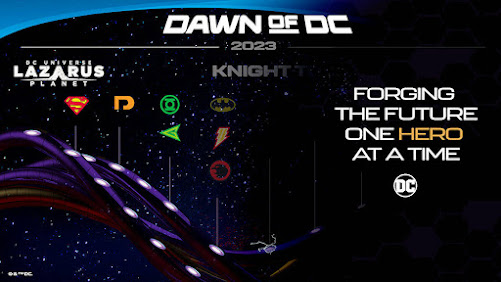 3. In November, DC Comics announced their plans for 2023. Ten titles were announced and some sort of schedule graph was released. Right in the center of the picture is Hawkman's logo. Absolutely nothing has been said officially about any Hawkman series. DC Comics said nothing, and many other comic sites barely mentioned that Hawkman appeared to be in the plans. Some fans have speculated that it is the Cavan Scott story. It could be just another unfulfilled tease that DC has become very loose with, so we'll have to see what happens.

There's no doubt that DC is in a huge state of flux with both its comics and movies right now. We'll just have to keep our eyes and ears open and hope the new DC leadership will bring the Hawks to new heights.

Looking Back
In comics, Hawkman and Hawkwoman got their first story together in 22 months in a book called DC Grifter Got Run Over by a Reindeer. It was a ten-page story by Cavan Scott. He has become the DC's writer for Hawkman at the moment. He seems to know his Hawkman history and appears to be picking up where Robert Venditti left off. That is a very good thing. Hoping for more from him. 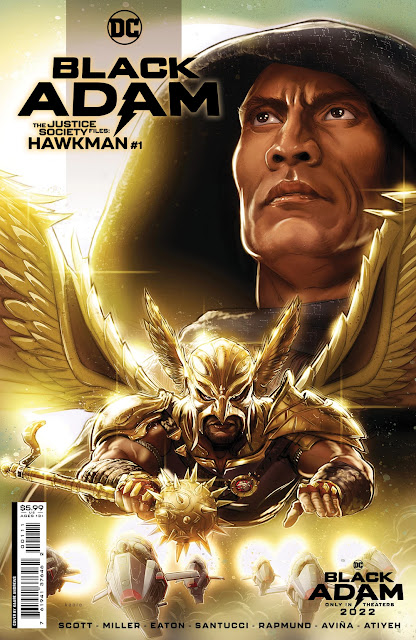 The Black Adam movie tie-in called Black Adam The Justice Society Files Hawkman #1 came out in July, also written by Cavan Scott. It was a pretty decent tie-in and introduction to the movie version of Hawkman. Hawkman also appeared in the Cyclone and Doctor Fate books that followed.

In July, Hawkman made a pretty cool appearance in Batman Urban Legends #17. Hawkman came to Batman to talk about Black Adam. Hawkman has a history with Black Adam that goes back 5,000 years, so he tried to give Batman some heads-up before Batman took off for Kahndaq. These two have never really gotten along, and they always seem on the verge of going at it. Nothing like that happened here, but it was nice to see Hawkman get some spotlight here.

Other than that, it was just random appearances in vampire stories, zombie stories, and a panel or two here or there. Hawkgirl (Kendra Saunders) appears to have been brought back in the Dark Crisis series, but no word on where or if she will appear again. There is currently no Justice League book (which is mind-boggling) so fingers are crossed for her to return there when it is started up again.

That was it for comics. It was a year of Batman in almost everything and too many books to even try to count. For me personally, the embarrassing glut of Batman has almost killed my interest in DC Comics so hopefully, Jim Lee or whoever replaces him eventually will cool off on Batman for a while and bring back the many great characters that DC has been neglecting. Gotta hope for the best.

On a side note, there were also a few figures, toys, and statues that were released before the Black Adam movie. 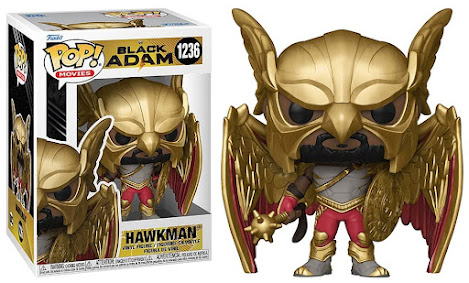 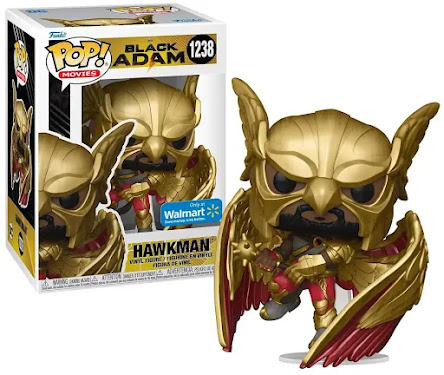 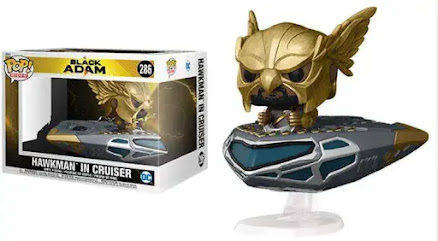 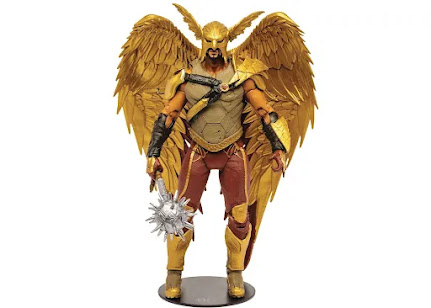 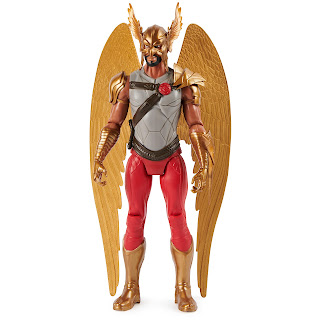 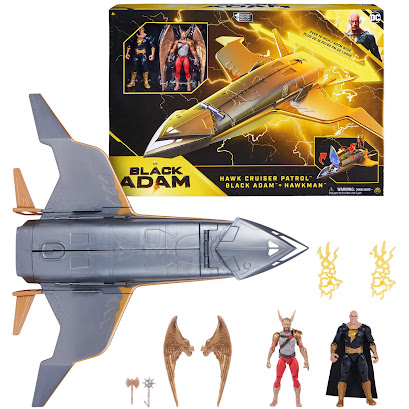 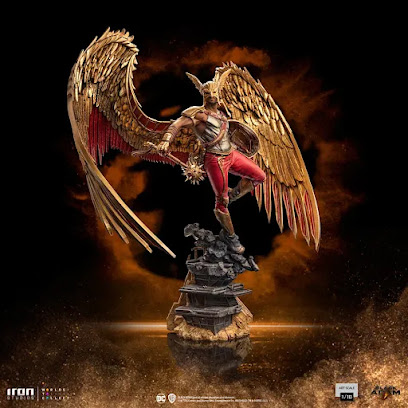 There were other odds and ends to promote the Black Adam Hawkman but these are the main ones that Hawkfans seemed to be shooting for this year.
The year 2022 was a mixed bag of sorts. There was very little in comics. The frustrating wait continued, but we'll see if that Dawn of DC pans out or not. After waiting for so many years, we finally saw Hawkman soar across the silver screen. It may not have been the Hawkman many fans wanted, and it may not result in any spinoffs, but it kept Hawkman in the spotlight in some ways, so we can be thankful for that. Who knows? James Dunn may announce a spinoff or an entirely new direction for Hawkman. Jim Lee's Batman fever may finally break, and we'll see better content that includes the Hawks during the upcoming year.
The best thing about 2022 was the fans. All across social media, the fans kept the Hawks alive and soaring, even though DC was not giving us much. There have been many times in Hawkman's 83-year history when the fans kept the Hawks soaring. Looks like we may have to keep doing it for a while. But one thing is for certain; you can never keep Hawk fans down for long!
Posted by Tim Board at January 03, 2023