The History of the Live-Action Hawkman and Hawkgirl.

Thirty-nine years ago, on January 19 and 26, 1979, NBC broadcast "Legends of the Superheroes", a two-part special with several DC heroes and villains. This was also the show that gave us our first live-action Hawkman. Do you know how many men and women have played Hawkman and Hawkgirl over the years? While live-action Batman actors are almost too numerous to count, the number who have played the Winged Wonders on silver or small screens have been few and far between. Let's take a look at the actors who have played the Hawks over the years. 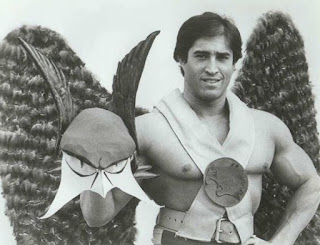 Bill Nuckols (Legends of the Superheroes, 1979)
Bill Nuckols is a bodybuilder from the 70s who made his TV debut on the show. He went on to have parts in two more movies, Sunset Cove (1978) and Supertrain (1979). He moved away from Hollywood after that and pretty much disappeared. One fan of the superhero special was able to track him down for an interview but judging from the article, Nuckols seems to be a man of few words. You can find the interview here. He also has an Internet Movie Database page with a bit of info.
Sidenote: Hawkman's mother, Mrs. Esther Hol, also appears on the show. For some reason, she lives in Peoria, Illinois, not Thanagar. Mrs. Hol was played by none other than Pat Carroll, the actress who did the voice of Ursula.


Jim Jackman (Baby Ruth commercial, 1997)
The second live-action Hawkman showed up 18 years later on a Baby Ruth commercial. He was played by Jim Jackman, a comedian who had parts in movies like Spaceballs and My Stepmother is an Alien. He was also involved in TV shows such as 3rd Rock from the Sun and Malcolm in the Middle. He is currently 61 years old and has a Facebook page. For the record, I have seen some criticize the commercial as demeaning to Hawkman but I absolutely love this commercial. You can also check out his IMBd page. 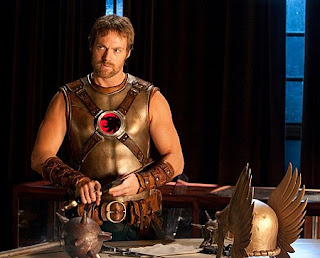 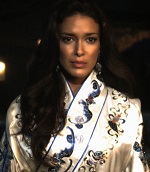 Michael Shanks (Smallville, 2010)
After another 13-year wait, we finally got what many consider the best live-action Hawkman to date. During the last two seasons of 'Smallville', Michael Shanks appeared in four episodes as the Winged Wonder. In true Hawkman fashion, he dies while saving Lois Lane in his final appearance. Shanks did a great job in bringing the first serious rendition in Hawkman to the screen so it's a shame that he was limited to only four episodes. However, he did give us the greatest superhero landing ever.

During the episode titled 'Shield', we were also treated to a vision of Shiera, played by Sahar Biniaz. Shanks was on the 'Stargate' series for years and since 2012, he has been on the TV series 'Saving Hope'. Check out his IMDb page. 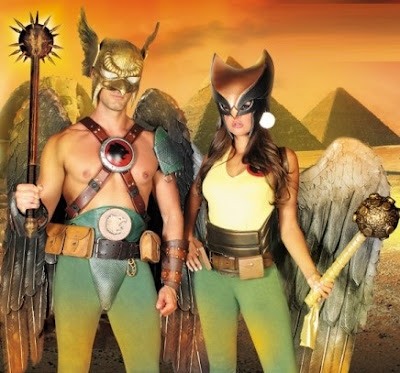 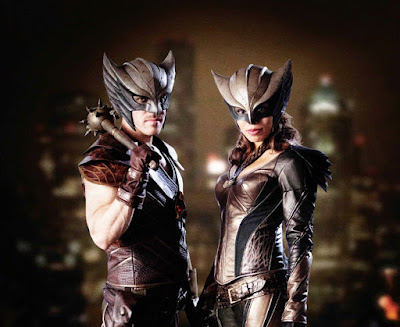 Falk Hentschel and Ciara Renee (Legends of Tomorrow, Flash and Arrow, 2015-2016)
Our next entry is from 'Legends of Tomorrow'. Falk Hentschel and Ciara Renee appeared in the Arrowverse during the 2015-16 seasons. Renee showed up first in the final episode of the first season of Flash. She was on two more episodes of the second season of Flash before being joined by Hentschel for one episode. They made an appearance in one episode of Arrow in 2015, before joining the cast of 'Legends of Tomorrow!. Unfortunately, Hawkman was killed off in part 2 of the pilot episode but came back for the last six episodes of the season, while Hawkgirl was a regular in all 16 episodes before they were written off the show at the end of the first season. Hawkfans are pretty divided on the look of this version of Hawkman and Hawkgirl. Their costumes were all brown leather, their wings sprouted out of their backs, and their maces were rather small. For Legends of Tomorrow's 100th episode, broadcast on October 27, 2021, Falk Hentschel returned for a few scenes. 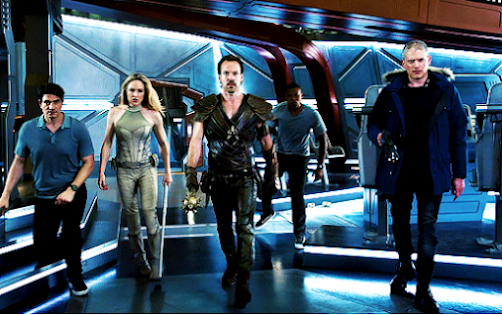 Both actors did a good job with what they were given. Maybe they will get another chance to play the characters in one of the Arrowverse series someday. Hentschel is currently working on various TV Shows. Check out his info on his IMDb page. Renee is currently involved in TV appearances and stage shows. Here's her IMBd profile.
Sidenote: In the Legends of Tomorrow titled 'The Magnificent Eight', Kendra meets the 18th-century version of herself named Katherine Manser, aka Cinnamon. Cinnamon is one of Hawkgirl's former lives in the comics. The character was played by Anna Deavere Smith. 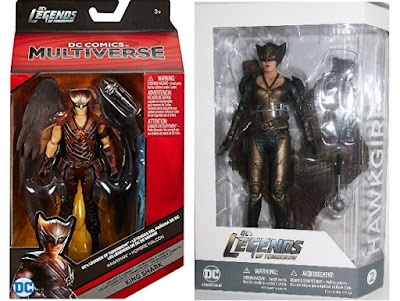 The Legends of Tomorrow's Hawkman and Hawkgirl also got their own action figures. The figures are not bad but they also make you wish the makers of this poor show had thought to add a bit of color to the Hawks' costumes. 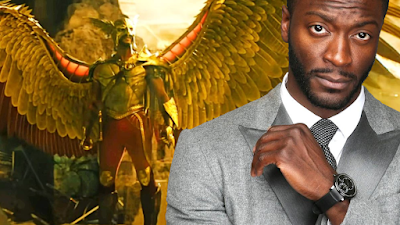 After another six-year wait, we are now getting a new Hawkman in the Black Adam movie. In September 2020, it was announced that Aldis Hodge will be playing the Winged Wonder. Hodge has been getting a lot of attention during the last few years and this role will hopefully make him an A-list actor in Hollywood. In the movie, his costume is drastically different from any other live-action Hawkman we have had. Maybe the studio heard the fans' complaints about the Legends version having no color because this version has color to spare. This version of Hawkman is the leader of the Justice Society, has an awesome ship, and appears to be the owner of a huge mansion that serves as the JSA headquarters. Aldis Hodge has mentioned in numerous interviews how excited he is to bring Hawkman to the screen. I've collected Hawkman news related to the Black Adam for the last couple of years. You can catch up on it here. The movie comes out on October 21 everywhere except Japan (December 2).
The Black Adam's Hawkman has also had several figures released. There are three Funko Pop versions, a figure by McFarlane, and even a cruise ship with figures. Definitely a must for all the collectors out there. 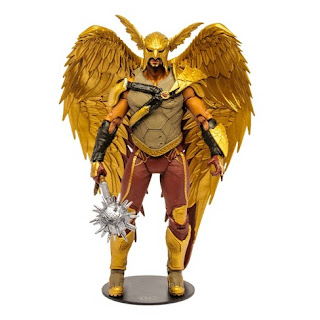 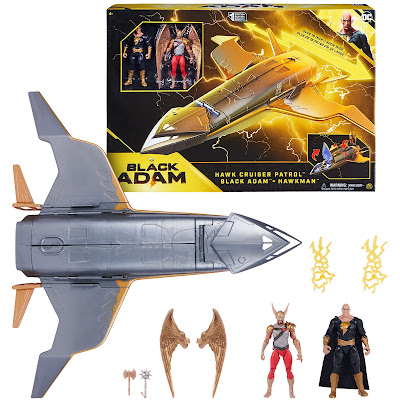 We've seen winged characters in recent years, in movies such as 'Legion' and 'Maleficent' and the sight of the winged characters flying through the sky is wonderful to see. With Aldis Hodge taking on the role of Hawkman in the Black Adam movie, we will finally see Hawkman fly across the silver screen. That will be an awesome sight to behold! 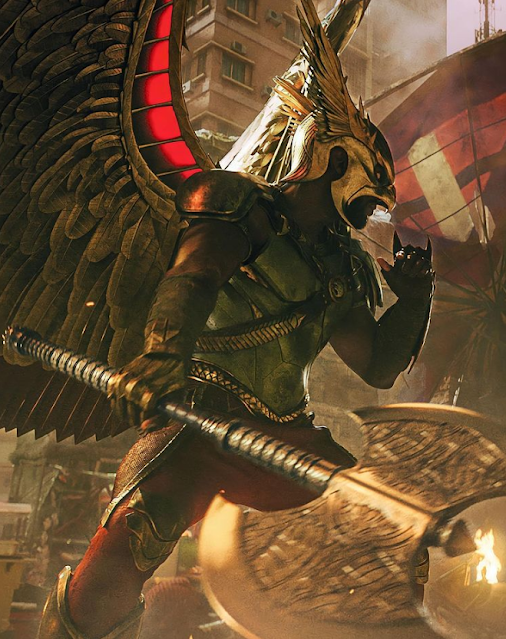