Board Review of Hawkman No. 28: Final Justice Part Two: The Nth Degree 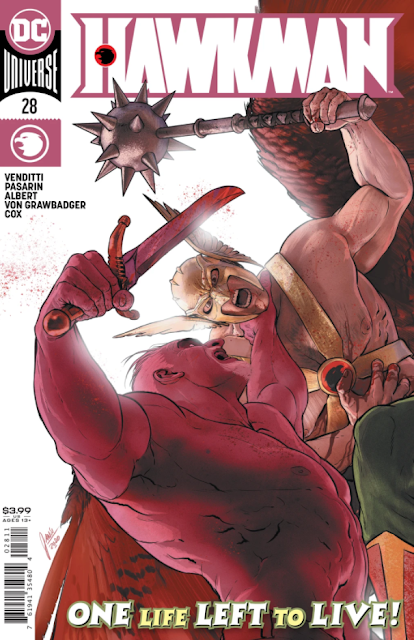 What do you do when you're not immortal anymore? Do you cherish each and every moment more? Do you suddenly become aware of the clock as your life heads to the inevitable finish? Or does the thought of your life ending paralyze you; not because you are afraid for yourself, but because you are afraid for the ones you love? In the last issue, we saw Hawkman and Hawkwoman enjoying their lives for once. They were free of the reincarnation cycle, and they had been granted one last life to live together in a time and place of their choice. They chose to live their last lives as members of the Justice Society of America in the 1940s. It was all good and fun until they faced death for the first time in their new situation. Carter Hall suddenly realized what he could lose. He had never faced that loss before. He always knew that he would be with Shayera Hol again in the next life, but that was gone. It paralyzed him. 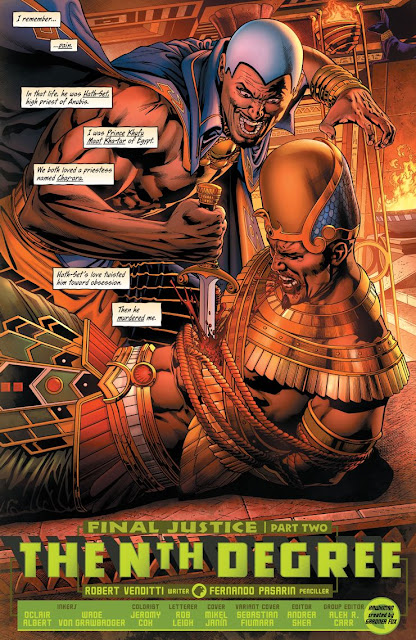 The next to last issue of Hawkman Vol. V was a bit of a disappointment, but it is obvious that writer Robert Venditti is setting the scene for the last heroic issue. It felt a bit rushed, but circumstances being what they are, I suppose it couldn't be helped. We find the Hawks discovering that Hath-Set is back and instead of waiting for him, they take the battle to him. We've seen what Carter and Shayera can do, but seeing them overpowered by this villain and his "recruits" felt forced by the plot. Carter should have been able to overcome this bunch, including Hath-Set easily. Was his newfound fear of death still paralyzing him?

This sudden fear that overcame Carter felt out of character a bit, while Shayera was her usual self, scolding Carter for letting fear take over. Personally, I disliked seeing him this way, but let's step back and look at the character that Venditti has written over the past two and a half years. Carter is not a devil-may-care, attack first think later hero. We have seen a feeling, sensitive, intelligent, thoughtful man who regrets what he has done in the past, loves the company of friends and loved ones, has a deep love for exploration and discovery, an unshakeable commitment to protect life, does not forget loss easily, and loves Shayera with all his being. But when you push him to the wall, you will find a warrior who is ferocious and willing to sacrifice himself without hesitation. I felt we saw that man in this issue. I feel that we will see the final portrait of Hawkman that Venditti has envisioned him to be. Will Carter and Shayera make it out of the final story alive? That remains to be seen.

The art was top-notch as always. It didn't seem so obvious in previous issues, but the expressions on Hawkman and Hawkwoman really stood out, almost to the point of being overdone but the time is short, and the pages are limited so it works. I enjoy Shayera's expressions during battle more than anything. She was the true star of this issue and I'm going to miss her fierce expressions, that beautiful red hair, and her battle scenes after No. 29. She is truly fun to read and look at. Fernando Pasarin has teamed up with Oclair Alberta and Wade Von Grawbadger to make a beautiful comic and Jeromy Cox's colors in this issue were just wow. That brutal pic on the first page is one to stare at for a while. I'm going to miss this team bringing us Hawkman every month. 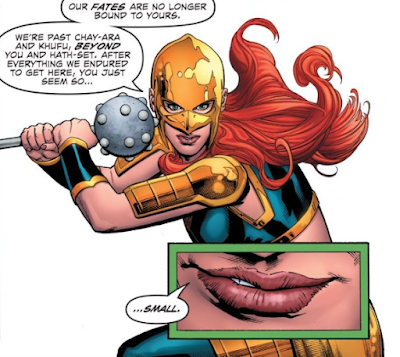 This was a difficult issue to process for me. When you know a series is ending, there's an ominous feeling that's hard to shake. And with characters like Hawkman and Hawkwoman, there are no guarantees that they will back in the comics soon, so you have to prepare for a long goodbye. I wouldn't have these feelings if the writing had been bad. Venditti has written a character who is not only a superhero but also a man named Carter Hall under the helmet. I'm going to miss this character. With the last issue coming out on the 81st anniversary of Hawkman's debut in 1939, we're sure to get an ending worthy of Hawkman. In Venditti we trust. 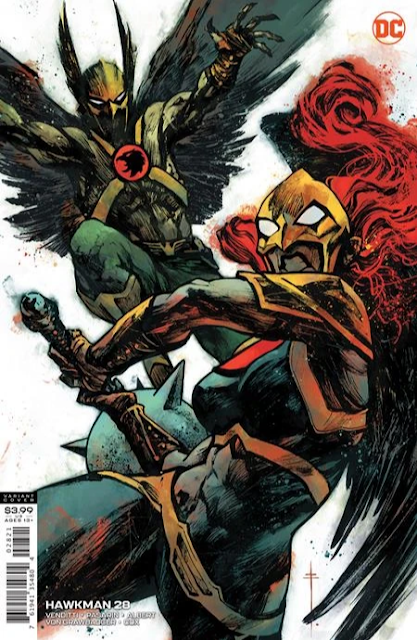