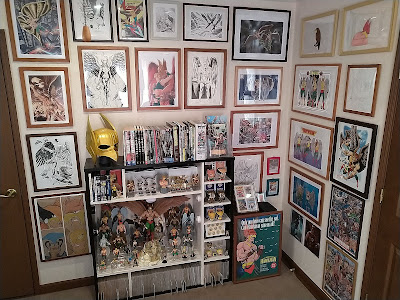 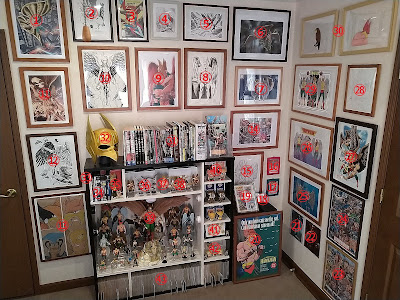 1. Hawkman Commission by Prentis Rollins: I asked Prentis to do a version of the cover of Flash Comics No. 2 with the current Hawkman.

3. Original cover of Action Comics No. 588 which I bought from the
colorist Tom Zuiko.

8. Original art by Rags Morales which I bought from an art dealer.

9. Hawkman and Hawkwoman by Mikel Janin: This is just a printed
out copy, but it is a "cleaned up" version of the art from the over of Hawkman No. 29. I asked Mikel if he could do it and he obliged.

10. Original Hawkwoman by Mark Marvida which I bought from an
art dealer.

11. Print of the cover of Justice No. 7 signed by artist Alex Ross

13. Hawkman and Hawkgirl original by Doug Zawisza, author of
Hawkman Companion. Doug sent these to me with some Hawkfigures a few years ago.

14. A print of the double spread by Bryan Hitch from Hawkman Vol. V No. 1, signed by Robert Venditti

18. Hawkman art by Chris Giarrusso which I got from an
auction.

20. House Ad full size poster for The Shadow War of Hawkman
No. 1

23. Hawkman Collage I made for Hawkman's 80th anniversary,
November 2019

27. Official print of Hawkman, Hawkwoman, and the Atom signed by Alex Saviuk

28. Print of Hawkman drawings by Joe Kubert with an
authentic Joe Kubert signature

31. Trades, Omnibuses, and collections of Hawkman and DC Comics.

33. Forgotten All-Star: A Biography of Gardner Fox by Jennifer
DeRoss (I get a mention in the book!) 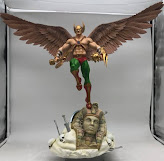 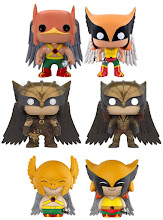 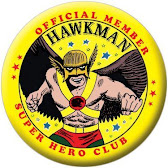 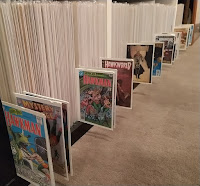 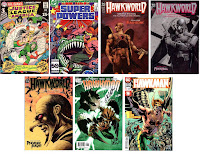 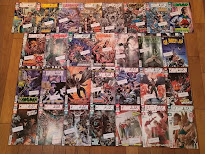 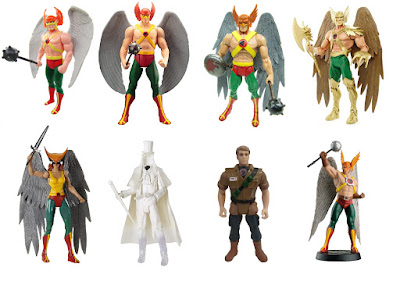