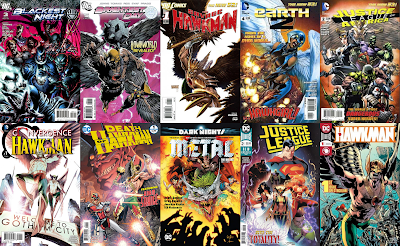 As we come to the close of the decade, it's time to look back on the past ten years and look at the best moments of the 2010s for Hawkworld. It was a turbulent decade, to say the least (when is it not?), but there is some comfort in the fact that we find Hawkman and Hawkgirl/Hawkwoman in a fairly good place as we head into the 20s. I looked back over the last ten years and made a list of the top twelve moments of the decade for the Hawks. I'll do a countdown, saving No. 1 for last.

No. 12 Death of Hawkman (2016-2017)
This 6-issue mini-series by Marc Andreyko (writing) and Aaron Lopresti (art) has seen mixed reviews, but I think it has aged well since it came out three years ago. When it came out, I'll admit I briefly thought that DC Comics was finally killing off the Hawks. In the big Rebirth promo pic by Ivan Reis that came out about three months before this series, there were 63 DC Comics heroes pictured and neither of the Hawks was included. There was nothing about them until the new series was announced. At first, the title was "Out of Time," but then changed to "Death of Hawkman" about a month before it was released. It didn't sound good. It starred Savage Hawkman and Adam Strange for another Thanagar-Rann war, this time with Despero as the antagonist. It turned out to be a fairly fun ride, and even though the characterization of Hawkman as a womanizing, boozing renegade Thanagarian cop and Adam Strange as a fairly wet-behind-the-ears, easily upset geek seemed overdone, the battle against Despero, the unexpected Green Lantern appearances, and the art, in general, made it a series to remember.

No. 11 Savage Hawkman and Earth 2 Hawkgirl (2011-2017)
The New 52 era gave us new versions of Hawkman and Hawkgirl, and both remain favorites of many fans. The Savage Hawkman/Carter Hall/Katar Hol series lasted less than two years, but the Nth Metal merging with Hawkman's body, the parade of fun villains, and the art, especially by Philip Tan and Joe Bennet, made it fun to pick up each month. Hawkgirl of the Earth 2 series was now Kendra Munoz-Saunders, a treasure hunter and one of the most skilled detectives in the world. Her blue outfit really stood out and it was a fresh look at Kendra. The characters never ran into each other during the time they were active, but I hope we see them again.

No. 10 Hawkgirl joins the post-Metal Justice League (2018-present)
After the events of Metal, Hawkgirl joined the Justice League. This series by Scott Snyder and James Tynion IV has been bombastic and one wild turn after another. Hawkgirl has been at the center of the story, with her wings connected to the Totality, the oldest power source that created the Multiverse. We have watched Hawkgirl slowly discover the secret of her powers, and also the development of her relationship with the Martian Manhunter. The series has been a bit exhausting, but it's been fun seeing Hawkgirl in the Justice League again.

No. 9 Hawkman Found (2017)
During the Metal series, we were treated to a one-issue tie-in by Jeff Lemire (writing) and Bryan Hitch (art). This is one of the most beautiful Hawkman comics I have ever seen. The cover by Liam Sharp is stunning. The story's content lets us see what was going on with Hawkman a bit before his transformation into the Dragon of Barbatos. But the art in this issue by Hitch was absolutely beautiful and it had Hawkman fans doing Twitter cartwheels when it was announced that Hitch would be the artist for the new Hawkman series.

No. 8 Return of Shayera (2019)
Hawkfans had been waiting for this moment for a long, long time. After the horrible ending of Brightest Day (2011), we had been waiting for Hawkman and Hawkgirl (or Hawkwoman in this case) to be reunited. It didn't happen after Metal, as it is apparent that Kendra was going in another direction and Carter didn't appear to be pursuing her either. All through the new series, Robert Venditti kept giving us glimpses and mentions of past Hawkgirls. The reunion finally came with a bang in the last Hawkman issue of the decade. It remains to be seen what will happen with Carter Hall and Shayera Hol, but she's back!

No. 7 Blackest Night (2010)
Since 2001, we had seen the constant Carter "It's destiny" Hall pining for Kendra "I make my own destiny" Saunders and the constant back and forth got pretty old. Kendra finally seemed to admit that she loved Carter right before both were killed at the beginning of the Blackest Night series. At the end of the series, all the heroes were resurrected, including Hawkman and Hawkgirl. But when Hawkgirl took off her helmet, it was Shiera, not Kendra. It was great to see Carter and Shiera again but then Brightest Day happened. The horrible ending of the following series still doesn't diminish the surprise we got in Blackest Night. Although I will admit that I wondered, "But what about Kendra?"

No. 6 Convergence Hawkman (2015)
In the vast wasteland of the mid-10s, Convergence Hawkman was an oasis. With art by none other than Timothy Truman, the story itself was difficult to follow, but it was so good to see Katar Hol and Shayera Hol together again. If I had to complain, it's that it only lasted for two issues.

No. 5 Catar-Ol of Krypton (Hawkman No. 8, March 2019)
In the new Hawkman series by Robert Venditti, we were introduced to a whole bunch of Hawkman's past lives in the first issue. One particular character that grabbed everyone's attention was a Hawkman that appeared to be a Kryptonian. For months, Hawkfans speculated about the character until we finally got a whole issue with the character. Not only did we find out he was Catar-Ol of Krypton, but it was revealed that he was the historian and curator of Krypton's museum, and Kara Zor-El/Supergirl's tutor as well. Minds officially were blown. While we had an idea, this issue showed us what amazing potential Hawkman had as a character. And Catar-Ol showed up again in Supergirl Annual No. 2, further cementing his place in Krypton and Supergirl's history.

No. 4 Live-Action Hawkman and Hawkgirl
In 2010, 31 years after the first, we got a live-action Hawkwman during the ninth and tenth seasons of Smallville. Michael Shanks appeared as Hawkman in four episodes in all during 2010. Shanks did a fairly good job with Hawkman and the costume was pretty awesome, too. We also got our first live-action Hawkgirl in 2015. Ciara Renne, along with Falk Hentschel as Hawkman, made appearances in some of the CW shows. Renee and Hentschel did a decent job with what they were given, but the costumes were bland and the writers actually admitted they had no more ideas for the Hawks and the heroes disappeared after the first season. Still, we got an awesome Hawkman in Smallville and our first live-action Hawkgirl so it was good enough to land high on my list.

Before I go to my top three, here is what is possibly the greatest page of Hawkman from this past decade. It came from Geoff Johns in Justice League of America No. 2 (March 2013). On one page, Johns showed the badassery of Hawkman. One of the best Hawkman pages in his 80-year history.

No. 3 The New Origin of Hawkman (Hawkman No. 7, February 2019)
In December 2018, the new origin of Hawkman was revealed. Ktar Deathbringer was from the beginning of time, a general of an army committed to murdering and sacrificing innocent people in order to resurrect their Lord of the Void. He gradually realized the error of his ways and sacrificed his life to prevent the resurrection of the evil entity. To make it even better, it appears that Hawkwoman's first life was the catalyst for his change. Ktar was given a chance by another being from the afterlife to enter into a cycle of reincarnation and save as many lives as he took. It was a bit shocking, but completely brought all the Hawkmen together and explained why Hawkman did what he did. It was a risky but brilliant move by Robert Venditti. I still hold my breath as I read this issue. This issue made me realize that Venditti wasn't just writing Hawkman. He was REwriting Hawkman, rebuilding him from the ground up. It worked.

No. 2 The Metal series by Scott Snyder (2017-2018)
In April 2017, we received the news that Scott Snyder was writing a series about Batman and Nth Metal. Needless to say, I wasn't too thrilled with that idea. I had no interest in seeing Hawkman's trademark item going to Batman. I didn't hold back on expressing my opinion on the matter on Twitter. That was when Snyder graciously told me to give the series a chance. He was bringing Hawkman back so I should trust him and read the series. He sure was right. He brought back Carter and Kendra in a huge way, giving them a prominent spot in the series. The Metal series also led to Kendra being a very important member of the Justice League and Carter getting his own series again.

No. 1 Hawkman by Robert Venditti (2018-current)
In June 2018, the new series by Robert Venditti kicked off. Right from the first issue, it was obvious that Venditti was going to write Hawkman without being limited by what had come before. Venditti wasn't going to continue Hawkman's story. He set out to rebuild it from the ground up. We got a new origin of Hawkman that brought everything together in one fell swoop. Venditti introduced the idea of Hawkman being reincarnated in both time and space, and now the sky was the limit. Not only that, but we have seen Hawkman's mace fly back to him, a new Nth metal space ship, an instant costume change, a mace that appears like a lightsaber, a friend network that covers the globe and much more. We have also seen old favorites, such as his friendship with the Atom and Midway City. It has been a brilliant series of writing that makes redemption, reincarnation, exploration, and discovery the themes of Hawkman. After 19 issues, it is quickly becoming one of the greatest Hawkman series ever.

Hawkman and Hawkgirl were not in a very good place when the 00s came to a close, and there were quite a few rough spots during the 2010s, but what a difference a decade makes. Venditti's Hawkman continues to get good reviews, Hawkwoman has returned, and Hawkgirl is literally shining in the Justice League series. We are also getting news/rumors about Hawkman and Hawkgirl appearing in the Black Adam movie that is set to start production in July. With Hawkman and Hawkwoman in a series together again, and with the possibility of seeing the Hawks fly across the silver screen during the 20s, Hawkfans have a lot to look forward to in the next decade. Let's hope the potential is realized and Hawkman and Hawkwoman/Hawkgirl continue to soar through the next decade.