Board Review of Hawkman No. 19: "Tyrant Reborn: Better Half"

Ever since we found out back in October that Hawkwoman was coming to the Hawkman series, many Hawkfans have been looking forward to this one. Since the series began a year and a half ago, we have been wondering how Hawkman would finally meet Hawkwoman. And as Carter Hall says, "Not like this." 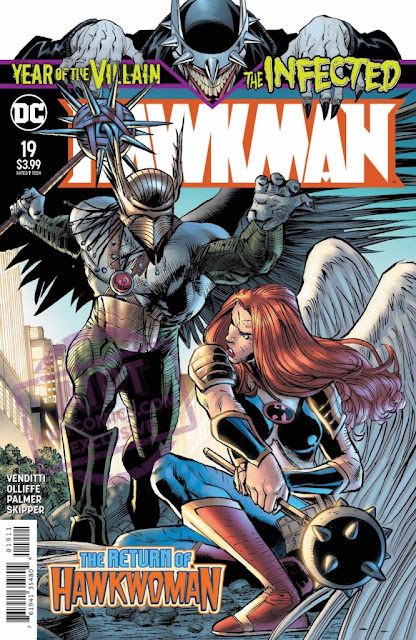 Hawkwoman has arrived to knock some sense into Hawkman, but thanks to Sky Tyrant's monologuing and the information from The Shade, she realizes he is not himself. Once she gives up trying to talk him back, she lets go and the battle is proof that Hawkwoman is one of the premier combat fighters in the DC Universe. The double-page spread of their fight alone is worth the price of the book. Sky Tyrant demonstrates another awesome feature of Hawkman's space ship, we get another reference to the healing powers of the Nth metal, and we are introduced to a journal that we have never seen before.
So why did Hawkwoman, who is far away on Thanagar Prime, show up to help Carter instead of Kendra, who is right over there in the Hall of Justice with the Justice League? In issue No. 15, The Shade tells Carter that he needs to "tell her" about what he has discovered so far. It's my guess that when he saw what happened to Carter, he specifically requested Shayera to come help, along with one or two other heroes we'll see in later issues. It's pretty clear at this point that Kendra and Carter are not going to happen. Kendra is in love with the Martian Manhunter, and she even has a son from another reality who looks just like the Manhunter with wings and calls her mom. Shayera was married to the Savage Hawkman/Katar Hol, and appears to more in tune with her destiny to reincarnate through time and space with Hawkman. Robert Venditti also mentioned in an interview that Shayera would be involved with the series going forward. It's going to be fun to see how Venditti writes the story of this Carter and Shayera.
Venditti continues to build up the character of Carter Hall. This issue had several references to things about all of the main characters so you have to read it a few times to make sure you catch everything. The story of how Carter can't remember everything seems repetitious at first, but it's a brilliant tactic to give us Carter's history one piece at a time. Venditti has always written strong and assertive female characters in his books, and he demonstrated that again this issue.

The art by Patrick Olliffe and Tom Palmer continues to be very good, but with the occasional panel that makes you wonder if they were in a hurry. Their style does seem to suit Sky Tyrant very well, though. This is Olliffe and Palmer's final issue on the series but they definitely left their mark on Hawkman. Also, Jeremiah Skipper has been the colorist of the series since issue No. 2, but apparently, this is his last as well. I'm sad to see him go, as he did an amazing job with the art by Bryan Hitch, Will Conrad, and Olliffe. Many thanks to the great artists who will always be a part of Hawkman's history! The variant cover by Dan Panosian was fantastic. I hope he comes back for another.
The Hawkman series continues to be a treasure chest of new information about the winged warrior. We found out more about the Sky Tyrant, finally saw the return of Hawkwoman, and we saw some more of Hawkman's ship and its capabilities. It's pure comic book fun and that's never a bad thing.