"'Twas the Night Before Christmas (Hawkman Version)"
By Clement Clarke Moore / Revised by Tim Board (@Hawkworld_)
'Twas the night before Christmas, when all through the house
Not a creature was stirring, not even a Thanagarian Snare Mouse
The DC Classic figures lined up on the mantle with care
In hopes that Hawkman soon would be there 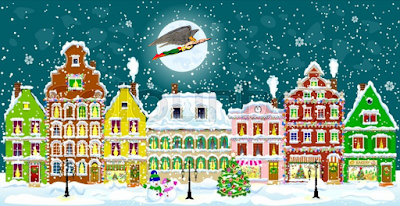 The children were nestled all snug in their beds
While visions of Nth metal danced in their heads
And mamma in her gown, and I in my Hawkman logo cap
Had just settled down for a long winter’s nap
When out on the lawn there arose such a clatter
I flew from the bed to see what was the matter.
Away to the window, I flew like The Flash
Tore open the shutters and threw up the sash.

The moon on the breast of the fresh-fallen snow
Gave the luster of Thanagar to objects below,
When what to my wondering eyes should appear
But a superhero, with wings and a spear
With muscles rippling, so manly and all
I knew in a moment it must be Carter Hall.
More rapid than lighting, the villains he did maim
And he bellowed, and yelled, and called them by name
"Now, Hath-Set! Now, Shadow Thief! Now, Lion-Mane and Byth!
Down, Gentleman Ghost! Down Fadeaway Man! Down, Hyathis!
Dare to challenge me! You’ve got the gall!
Now run away! Run away! Run away all!"
As feathers that before the wild hurricane fly
When they meet with an obstacle, mount to the sky
So away from our hero the villains they flew
With bruises and blows, and wounded pride too
And then, with a fluttering, I heard on the ground
The heavy boots of the Warrior pound
As I drew in my hand and was turning around
Flying in through the window Hawkman came in with a bound
He was dressed in green pants, but only a harness up top
And his weapons were all tarnished with blood and whatnot
Huge, massive wings he had strapped on his back
And he looked like an archangel with demons to attack
His eyes -- how they shone! His helmet how sleek
His cheeks were unshaven, his nose like a beak
His hard, stern mouth was drawn up in a grimace
And the hair on his chest was as black as the furnace
His Nth-metal mace he never let down
And the helmet around his head like a crown
He had a broad face and a tight hard belly
That clenched and flexed, when he walked so steady
He was massive and muscular, a winged warrior
And I trembled when I saw him, in spite of my wonder
A stare of his eyes and a twist of his head
Soon gave me to believe I had everything to dread
He spoke not a word but came to me like a bolt
And shook my hand; then turned with a jolt
And spreading his wings all gray and blue
And giving a nod, out the window he flew
He sprang to the sky, to his enemies he gave a shout
And away they all flew like Man-hawks with a pout
But I heard him exclaim, ere he flew out of sight
"HAPPY CHRISTMAS TO HAWKWORLD,
AND TO HAWKWORLD A GOOD-NIGHT!"
Posted by Tim Board at December 12, 2019