The solicitations for December 2019 are out! The big news is that Hawkwoman, Shayera Hol of Thanagar Prime, is coming to the Hawkman series to face the evil Sky Tyrant! Here is the complete list of December solicitations from Newsarama. Here is the list of comics that appear to have Hawkman and Hawkgirl/Hawkwoman. Note: Appears on the cover but not sure if actually in the comic!

Justice League #37 (Kendra Saunders)Writers: Scott Snyder and James Tynion IV Artist: Jorge JimenezCover: Francis Manapul Variant Cover: Tony S. Daniel  “Justice/Doom War” part eight! The Justice League is making their final push against Perpetua, but some players they previously counted as allies may have been working for the other side the whole time! Who among Perpetua’s children will betray them and join Lex Luthor’s war on justice?ON SALE 12.04.19 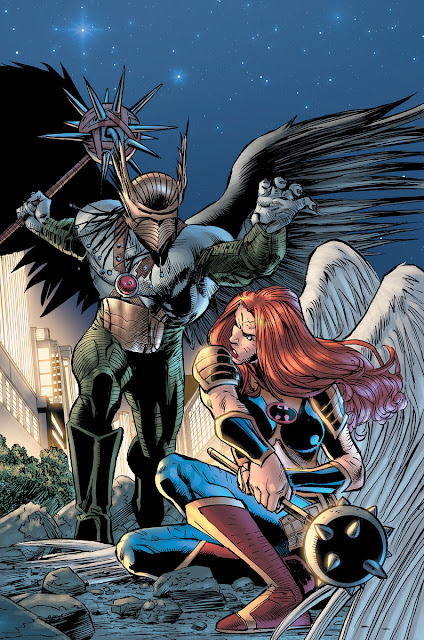 Hawkman #19 (Sky Tyrant, Evil Hawkman of Earth-3 and Hawkwoman, Shayera Hol of Thanagar)Writer: Robert Venditti Artists: Pat Olliffe and Tom Palmer Variant cover by Dan Panosian She’s back! Twisted into the murderous villain Sky Tyrant by an infection with no cure, there’s only one person in the universe who can knock some sense into Hawkman—Shayera Hol, Hawkwoman of Thanagar! Sent to rescue Carter Hall from the depths of his corruption at the hands of the Batman Who Laughs, these two star-spanning partners collide in the fight for a hero’s soul. Will the goodness still lurking inside Carter Hall be enough to stop Sky Tyrant’s total takeover, or will Sky Tyrant turn the tables and reveal Carter Hall’s most lethal secret?ON SALE 12.11.19

BATMAN/ SUPERMAN #5 (Sky Tyrant, Evil Hawkman of Earth-3)Writer: Joshua WilliamsonArtist: David MarquezVariant Cover: Jim Cheung The Batman Who Laughs has unleashed his Secret Six! Now these infected heroes threaten to spread their dark infection across our world, and the only thing that might stop them is the combined might of the Dark Knight and the Man of Steel. If they fail, the planet will become the seed that grows a new Dark Multiverse—heroes will fall, villains will rise, and a new era dawns for the DCU in this explosive first arc finale that leads directly into Year of the Villain: Hell Arisen #1!ON SALE 12.18.19

JUSTICE LEAGUE #38 (Kendra Saunders and Golden Age Hawkman)Writers: Scott Snyder and James Tynion IVart by JORGE JIMENEZCover: Francis Manapul Variant cover: Tony S. Daniel “Justice/Doom War” finale! Lex Luthor is triumphant. Perpetua is back to full power and ready to take on the Multiverse, to bend and twist the whole of existence to suit Doom. Has the Justice League finally come up against a foe they can’t defeat? Perpetua is the mother of their universe after all, the original creator. In war, there can only be one winner, and it just may be Doom’s turn to collect the spoils. This issue leads directly into Year of the Villain: Hell Arisen #1!ON SALE 12.18.19

YEAR OF THE VILLAIN: HELL ARISEN #1 (Sky Tyrant, Evil Hawkman of Earth-3)Writer: James Tynion IVArtist: Steve Epting Variant Cover by Richard FedericiDC’s “Year of the Villain” begins its sinister conclusion! Lex Luthor has brought Perpetua back from her cosmic grave and restored her power! Now the Multiverse lives in fear that she might wipe out all existence. The only thing that could stop her are the forces of the Dark Multiverse— which means it’s Luthor’s mission to defeat the Batman Who Laughs! But if Batman and Superman couldn’t stop him, what chance does Luthor stand? Spinning out of the end of the “Justice/ Doom War” in Justice League #38 and the conclusion of the epic “Infected” arc from Batman/Superman #5, DC’s two top villains face off in a battle royal—and the fate of all reality hangs in the balance!ON SALE 12.18.19

ACTION COMICS #1018 (Kendra Saunders)Writer: Brian Michael Bendis Artists: John Romita Jr. and Klaus JansonVariant cover: Gabriele Dell'otto One of the biggest Superman stories of all time continues in “Metropolis Doom” part two! War and chaos strikes the heart of Metropolis. The Invisible Mafia, Lex Luthor, and the Legion of Doom all stand their ground to take over Metropolis. Superstar writer Brian Michael Bendis reunites with comic art legends John Romita Jr. and Klaus Janson to bring you a Superman story for the ages! Guest-starring the Justice League, Young Justice, and more!ON SALE 01.01.20
Posted by Tim Board at September 16, 2019