Board Review of Hawkman No. 16: "Darkness Within: Old Ghosts" 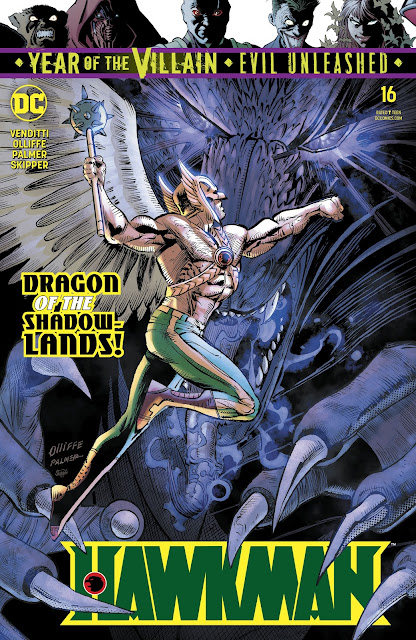 It’s DC Comics’ year of the villain, and Hawkman No. 16 brought us villains from every direction. We got Gentleman Ghost, arguably the most popular Hawk-villain in a flashback, a former villain-turned-ally in the Shade, Shadow Thief, arguably the most famous Hawk-villain all powered up, a giant shadow dragon, and the apparent arrival of the Earth-3 Hawkman Sky Tyrant. Wow, this book was fun!
Robert Venditti continues to give us a Hawkman/Carter Hall that just…makes…sense. Hawkman has seen and experienced too much to just fly off the handle at every slightest thing. The way he accepted Shade as an ally and even offered a Hawk-cane as a sign of friendship shows foresight that only two immortals could share. His writing of the Shade/Richard Swift is spot on. At least I assume it is because he reads as a somewhat self-important, snobby British villain with a high opinion of himself and Venditti seems to have that angle down. Carter and Richard really play off each other well and my hat goes off to Venditti for making it work so well. 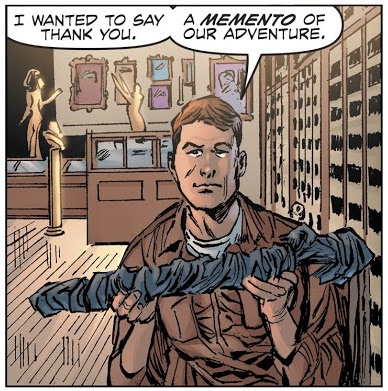 I’ll admit I didn’t understand why Carter suddenly lost it back in the Shade’s light room and pretty much demolished it after losing to Shadow Thief again. I was thinking, “Whoa, Venditti! What are you doing?! You were writing such a great, calm, composed Hawkman and then he loses it like that?! Are we reverting here?” This issue made that scene make sense. I should have connected the dots but this is why Venditti is one of the best writers out there today. Very well done.

Venditti has also been introducing Hawkman's new or improved powers and abilities throughout this run. In this issue, we get to see him use his wings in a way that was very impressive. We've seen something similar in the past, but it is nice to see Hawkman's wings still have that ability. Also, to see the mace flying around with Hawkman and that little "FIP" when Hawkman grabs it back out of midair is so cool. 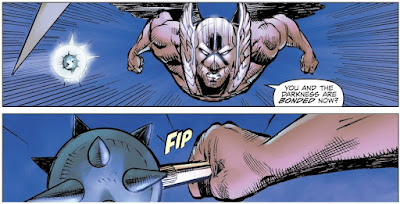 Is it just me or did the art get even better this time around? Pat Olliffe and Tom Palmer may be getting into their grove as Hawkman artists. That Shadowland scene must have been quite a challenge but it worked, and Jeremiah Skipper’s colors were dark and light enough at the same time to give the whole issue a dreary atmosphere. And one more thing. How did they draw Gentleman Ghost like that? I don’t believe I’ve ever seen him drawn that way before, but it was absolutely perfect for that character. I would love to see a YouTube video of how they did that. I’m not an artist, and maybe there’s an easy way to come up with that effect, but wow. More Gentleman Ghost, please! 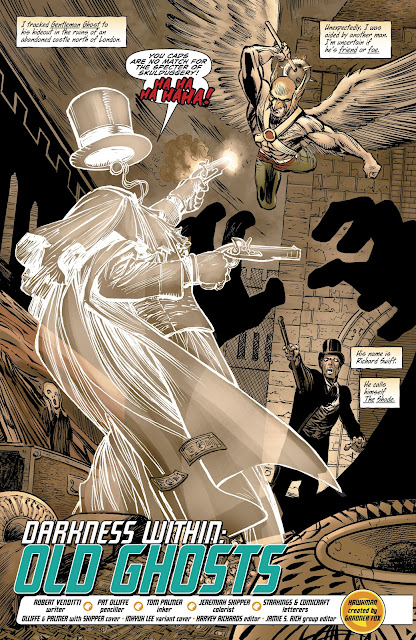 The issue set up what’s coming for Hawkman, so if you want to see how that Batman Who Laughs story takes shape, this issue is a good starting place. And the next issue is a must. The showdown with the Shadow Thief, presumably the end of Shade’s part in the run, and the arrival of Sky Tyrant all seem to be coming in the next issue. If you want to start picking up Hawkman in the current story, start at issue No. 14. It’s been a fun ride that is just now reaching its crescendo.
The third issue of this current storyline has Hawkman doing his thing with his mace, the Shade throwing shade around, Shadow Thief using his powers to create a monster, an appearance by Gentleman Ghost and an ominous cliffhanger. What more could you want from a Hawkman comic?