---It seems like some kinda destiny that him (Hawkman) and I are gonna keep runnin' into one another.

Lex Luthor. Joker. Cheetah. Professor Zoom. Black Manta. Sinestro. All of these villains are instantly recognizable to comic book fans as the main adversaries of the DC Comics' superheroes. They constantly, almost too frequently, show up in the comics of the heroes. DC Comics has deemed 2019 as the Year of the Villain, and for the main adversary to fight Hawkman, Shadow Thief was chosen. Many Hawkfans may have chosen Gentleman Ghost, Hath-Set, or Byth as Hawkman's main antagonist. But out of all the Hawk-villains, and there are many, Shadow Thief has the most appearances in the comics over the years. Shadow Thief, along with Gentleman Ghost, are probably the two most famous and popular Hawk-villains. Shadow Thief has made his presence felt in DC Comics over the years, so it can be said that he deserves the spotlight There have been a few versions of the Shadow Thief, but I'll focus on the most famous, original and current Shadow Thief, Carl Sands.
In many ways, the Shadow Thief is the polar opposite of Hawkman. While Carter Hall flies in the open skies, Carl Sands slinks around in the dark corners. Hawkman is a mace-swinging, fist-flying, direct confrontation-type of hero, while Shadow Thief is intangible and sneaky. Hawkman relies on his own abilities and intelligence to overcome his adversaries, while Shadow Thief uses the devices and powers of others to get what he wants. Carter is willing to sacrifice his life to save lives and Carl is willing to sell his soul to achieve more power.

Shadow Thief was created by Gardner Fox and Joe Kubert and his first appearance was in The Brave and the Bold No. 36 (July 1961). Carl Sands started out as a thief who was caught because the policeman saw his shadow during a robbery. This created his desire to use his shadow to commit crime. During his experiments, he came into contact with a being named Thar Dan who was from a dimension called Xarapion. He gave Carl Sands a device called a dimensiometer. Thie device gave him the ability to leave his body in the other dimension while his shadow is free to move about on Earth.

The Different Versions of Shadow Thief
1. Carl Sands (Silver Age): a small-time crook who was given a shadow vest by a being from another dimension.

2. Carl Hammet/Mr. Hammer: This version had nothing to do with the original Carl Sands. Carl Hammet spent a million dollars to develop a shadow suit. It gave him the power of hiding in the shadows but not the power of intangibility.

2. Carl Sands (New Earth): a spy/thief who grew up in Japan where he learned various forms of combat. He received a shadow device from Byth and used it to fight Hawkman.

3. Carl Sands: (Prime Earth): This is the current Shadow Thief. He is a career thief who came into possession of the shadow vest. It is thought that this Shadow Thief also received his shadow device from the Thanagarians.

4. Aviva Metula (New 52): Metula appeared during the New 52 era as a female version of Shadow Thief with slightly different powers.

For this article, let's focus on Carl Sands' powers and the abilities he has shown over the years.

Shadow Thief's Powers and Abilities: These are the powers that Carl Sands as demonstrated over the years.
Shadow Phasing: He can freely move through solid objects, and he can not be touched or hit when in shadow form.
Shadow Manipulation: He has the ability to steal and control other people's shadows.
Shadow Constructs: He can create solid constructs out of shadows.
Shadow Army: He can summon a shadow humanoid army to go into battle.
Shadow Teleportation: He can travel instantly across the world by moving through the shadows.
Dimensional Travel: He can travel to the realm of shadows, also known as the Shadowlands.
Heat/Energy Absorption: He has the ability to take hold of something and suck the heat or energy out of it.
Ninjitsu (ninja techniques): He has mastered the arts of the ninja, especially espionage and assassination.
The Dimensionator: This is the shadow vest or device that Shadow Thief wears to gain his abilities. There was also a time when the device appeared to be sentient, talking to him and increasing his powers.

Despite his abilities, Shadow Thief has always relented to higher powers or other villains. In the past, Byth, Necron, Eclipso, Hath-Set, the Wizard of Ys, and now Lex Luthor have made him more powerful in exchange for his loyalty and service. It appears he has no pride or self-belief in his abilities to defeat Hawkman and the other superheroes, but he is willing to do anything he can to get the upper hand and defeat Hawkman.

Shadow Thief also made an appearance in the Crisis on Infinite Earths.

In 1985, there was another Shadow Thief-like character in the Vigilante series. A character named Hammet spent a million dollars to develop a shadow suit in an attempt to kill his own brother. The suit gave him the power to hide in the shadows but not the power of intangibility.

Shadow Thief had the ability to grab hold of someone and strip all the heat out of their body. He once almost killed Hawkman this way.

With the arrival of the Hawkworld series, we got a new Shadow Thief. He was now a ninja spy from Japan who was given a shadow field generator from Byth. Byth hired Sands to steal Hawkman's command ship.

We later found out that shadow field generators were standard equipment for the Thanagarian police force. Katar Hol put on a generator and fought Shadow Thief in shadow form.


Shadow Thief has made appearances in many other comics over the years.

Shadow Thief admitting that he seems to have the destiny to keep running into Hawkman.


Continuing the storyline from Hawkworld Vol. 2, it appears that the current Shadow Thief has also gotten his shadow device from Thanagar.

Shadow Thief also showed up in the JLA/Avengers crossover in 2003.

From his debut to the 1990s, Shadow Thief appeared only sparingly, but he was everywhere during the 00s.

In the Manhunter series, the Shadow Thief showed all kinds of new abilities. Here he uses the shadows almost like Plastic Man to throw Manhunter off the roof. He also used the shadows to regenerate his severed arm. He had a huge hole in his midsection after being shot but he was still alive and regenerated quickly.

Also in the Manhunter series, Carl Sands was put on trial for the murder of Firestorm, and Hawkman was called in as a witness. Here Hawkman is explaining the dangers of wearing the vest too long.

.
Shadow Thief played a part in the story of Golden Eagle. He was attacking Shiera when Charley Parker stepped in to fight him until Hawkman showed up. Because of this, Carter Hall gave Charley the armor and wings that led him to eventually become the Golden Eagle. 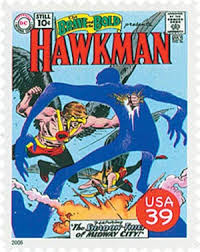 In the Justice League of America series (2006), Dr. Light and Firestorm visit Shadow Thief in the Van Kull Maximum Security Prison. He is shut up in a brightly lighted cell, but he uses the shadow in his mouth to completely overwhelm bothe heroes. 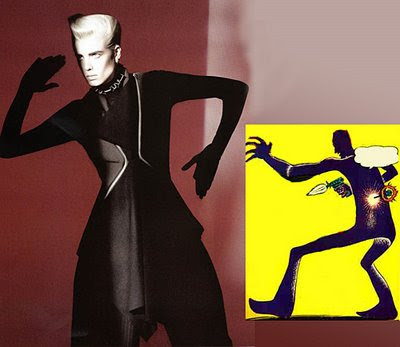 In the origin story of Warhawk, the son of John Stewart and Shayera Hol, Shadow Thief murders Vixen right when John is proposing to her. John, Shayera, and Adam Strange go after the Shadow Thief for revenge. For breaking the Green Lantern Corps rules, the Guardians took away John's ring.

After getting shot in the head by John Stewart, Shadow Thief's body was devoured by some alien beasts called Gruktharrs.
Speaking of the Justice League Unlimted, there is even a short YouTube video featuring the Shadow Thief in some of his appearances on the show.

Shadow Thief has always made some creat comic book covers over the years.

From 2011 to 2014, Aviva Metula was the Shadow Thief featured in DC Comics. The origin of her powers was different, but there were similarities. The shadowland in the Savage Hawkman series was quite terrifying.

After the New 52 ended, Shadow Thief disappeared for a while, although he did show up in the Scooby-Doo Team series, along with Fadeaway Man and Matter Master.

The Live-Action Shadow Thief
The first live-action Shadow Thief appeared on "Arrow" on April 15, 2019. They used the Aviva Metula version and she was played by Carmel Amit, an Isreali actress who currently resides in Canada. The part was for only one episode.

The new Hawkman series started in June 2018 and the Shadow Thief finally made his first appearance in the book in issue No. 14. It is for DC Comics' Year of the Villain event and it is a 4-issue story arc, running up through issue No. 17. In the story, he appears to still possess the Thanagarian version of the shadow vest, and he accepted an offer from Lex Luthor for a "technological enhancement," giving him the power to control all shadows.

From the Villain of the Year series I read, all of the villains did not immediately jump on to Lex Luthor's offer. The only one to accept the offer right away was the Shadow Thief. This tells you a lot about the character of Hawkman's nemesis.
In this issue, we see the powers of the new and improved Shadow Thief right away. He catches Carter Hall by surprise, easily defeats him and drags his shadow away.

In Issue No. 15, we find out that the Shadow Thief's main target was The Shade. Shadow Thief rather easily steals the Shade's shadow, humiliating the villain-turned-hero, and proclaiming himself the true Master of Darkness.

In issue No. 16, Hawkman and the Shade travel to the Shadowlands where Shadow Thief is the most powerful. We see an entire army of shadow beings controlled by the Shadow Thief, and then a giant shadow dragon which easily wipes out the Shade. Hawkman is able to defeat the dragon and goes directly after Shadow Thief. It appears the villain has a few more tricks up his vest before Hawkman will be able to overcome his arch-rival.

The Shadow Thief has been a prominent villain in the history of Hawkman and Hawkgirl. Hawkman writer Robert Venditti is adding another chapter to the long battle between Hawkman and his arch-enemy. The final issue of the 4-issue run is coming out on October 9th! Don't miss the climax!