"As I sat by the window I noticed a bird collecting twigs for a nest. The bird would swoop down, pick up the twig, and fly away. I thought, 'Wouldn't it be great if the bird was a lawman and the twig a crook!?'"

---Gardner Fox, Creator of Hawkman
When Hawkman was created by Gardner Fox in 1939, there were no superheroes whose main superpower was flight. There were already some heroes who could "fly", but their main power was super-strength, sleuthing skills, or speed. Namor the Sub-Mariner could fly with those little ankle wings, but he was a hero of the seas. Zatara, who was appearing in Action Comics, could levitate and occasionally use other things to fly, but his main power was magic. Hawkman was the first superhero who was all about flight. He even took the identity of a Hawk, with wings and a helmet that had a full-on hawk head at first. "Look! A Hawk!" "A Gigantic Hawk!" After his debut, many heroes appeared with the power of flight or were eventually given the power. Hawkman lost his uniqueness with so many heroes flying around.
But to me, Hawkman remains special. From the first time I noticed him in that Justice League of America picture by Neal Adams and Dick Giordani, Hawkman has sunk his talons into my imagination. People often ask me why I like Hawkman. There is no simple answer but it's Hawkman Day so I'll give it a shot. We Hawkman fans often think of things in nines (It comes from all that exposure to the Nth metal!), so here are nine reasons I consider Hawkman the most amazing superhero in comics.
THE IMAGE
The first thing most people notice about Hawkman is his appearance. It's unique, even for superheroes. The wings, the harness, the helmet, the mace, and the bare chest all give Hawkman an identity all his own. There have been times when Hawkman was given a shirt or full uniform, but he has always returned to his original look. Hawkman's look is the definition of flight, power, assertiveness and heroic masculinity. Growing up, I remember seeing Hawkman with Hawkgirl, who was amazing in her own right and certainly no sidekick, and thinking this is the kind of man I would want to be if I were a superhero. He was the perfect picture of a masculinity. It's often said that image is everything and Hawkman has it in spades.
THE POWERS
Over the years, like any other superhero, Hawkman's powers have evolved. He has been said to have the powers of super-strength, super-vision, regeneration/healing, and flight. There are other heroes who can fly, but no one can match Hawkman's aerial abilities. He also is one of the top combatants in the DC Universe. He has been learning fighting techniques for thousands of years. In the past, he also had the ability to communicate with birds, which gave him an incredible source of information. The Nth Metal has incredible potential and we may see even more abilities in the future.
THE WEAPONS
It's always a thrill to see Hawkman give a mighty swing at something with his mace. Since the very beginning, Hawkman has always been seen with some kind of weapon. The flail first appeared in Flash Comics No. 8 (August 1940) and the mace (the correct term is Morning Star) he now uses first appeared in Flash Comics No. 47 (November 1943). During the Hawkworld series, he used guns and then a Katar blade more often. After Carter Hall returned in JSA No. 23 (June 2001), his standard weapon became the Mace. You can read about the history of the mace here. The most powerful weapon Hawkman has ever used is the Claw of Horus. This was introduced in JSA No. 20 (March 2001), and while it has not had too many appearances, there is no doubt that we will see it again someday in the new series.
THE HISTORY
Almost every Hawkman article begins with "The hero with the most confusing and convoluted history in comics!" Yeah, OK. We get it. You pick up a comic and wonder which Hawkman you're reading about. Is it the Egyptian version? The Thanagarian hero? Or maybe a combination? When I pick up a Hawkman comic, I don't really care to be honest. Hawkman is one man. There are thousands of Green Lanterns out there. There are several versions of The Flash. All of these versions of Hawkman that you see just happen to be the same man, thanks to Robert Venditti's brilliant theory. I have attempted to put the continuity down on paper for those who want to get it straight. You can see the Hawkworld flowchart here. Just enjoy Hawkman for what he is. A winged, sometimes Egyptian, sometimes Thanagarian, mace-swinging badass hero who wears many helmets. 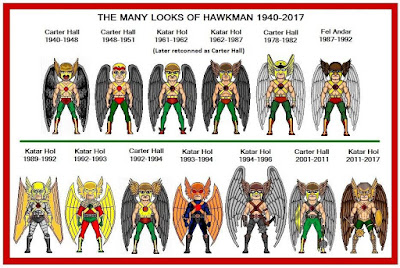 THE TEAMS
Hawkman has been a member of several teams over the years. He was the only hero to appear in every Justice Society story during the Golden Age (1940-1951). He was the 10th member to join the Justice League back in 1964. He was a core member of the All-Star Squadron and missed only one story during that eight-year run. He is currently on his own but my hawk senses are starting to sense a new Justice Society series approaching. Wouldn't that be a wheet?
THE FRIEND
Whether it be Carter Hall or Katar Hol, Hawkman has had some strong friendships in comics over the years. His most famous is, of course, the Atom. These two have been teaming up together since the early 60s and the Atom's recent appearance in the new Hawkman series was a welcome sight. If you're looking for a bromance, this is it. Here's my article on their friendship. Hawkman has also had a long friendship with Adam Strange, and he also has a special relationship with the Silver-Bronze Age Barry Allen. Hawkman and Green Arrow have often been depicted as frenemies, a conservative-liberal clash of super-hero ideals, but deep down, I suspect they truly care for one another. Seeing any of these heroes with Hawkman is always a fun experience.
THE VILLAINS
During his 79-year history, Hawkman has come up against a very interesting group of villains all his own. Batman or the Flash's villains get a lot of the attention lately, but Hawkman's group of adversaries is just as formidable and interesting. Villains like the Gentleman Ghost, Shadow Thief, Hath-Set, Byth, Lion-Main, Fadeaway Man, the Monocle, Onimar Synn, the Matter Master, Hyathis, Satana, and many others keep Hawkman plenty busy. My personal favorite has always been the Gentleman Ghost. If you thought Batman and the Joker have a history, wait till you find out about these two! Hannibal Hawke, Hawkman in a former life, caught and hung Jim Craddock, a highway robber, back in the late 19th century. But because of Hawkman's reincarnation curse, Craddock was also cursed. Instead of moving on to the next life, he is stuck in this realm as a ghost and cannot truly die until Hawkman's reincarnation cycle is broken and he dies for the final time. Venditti has also said the Gentleman Ghost is his favorite Hawkman villain so it will be interesting to see him show up in the new series some day.
THE LOVE
You cannot talk about Hawkman without mentioning Hawkgirl/Hawkwoman. These two have been together since the very first issue back in 1940. They are equals, linked together in many ways over the years and are in my opinion the most interesting couple in comics. Their love for each other is so powerful, their bones from a former life are a power source for the power battery on Zamaron! Scott Snyder is currently building up Kendra Saunder's story in the Justice League series, and Venditti is establishing Carter Hall at the moment, but I have a feeling that Hawkgirl's return to Hawkman's life is going to be epic.
THE MAN
One of the most amazing things Venditti has done in the new series is to make Carter Hall a truly interesting character in his own right. Hawkman's smackdown of a T-Rex or punching through an army of Feitherans has been fun, but I have enjoyed Carter Hall's relationships with all the supporting characters. Venditti has set Carter Hall up as a respected archaeologist, with a vast network of friends all over the world. Carter's look of joy and relief when he gives Ray Palmer a hug never fails to bring a smile to my own face. There are many ideas on how to make a Hawkman comic book successful, and making the man behind the mask just as interesting and deep as the hero is vital for any comic. One of the greatest things about Superman is the story of Clark Kent. Same goes for Bruce Wayne/Batman. It appears that Venditti has firmly grasped one of the keys to making the current series the most successful Hawkman run ever.

For the past forty years, the character of Hawkman has been a part of me whenever I read a comic. For different reasons, I've had to step away from comics at times, but every time I come back, Hawkman and DC Comics have given me thrills, some anguish, and inspiration. Whenever someone asks me why I like Hawkman, I could talk about it for hours, but the answer is simple. I was made to soar with Hawkman.