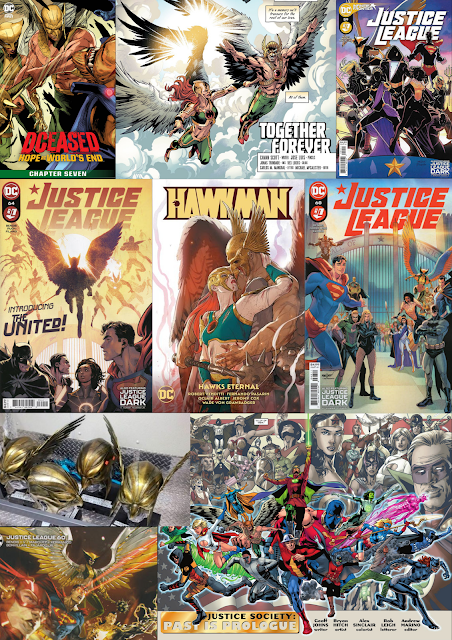 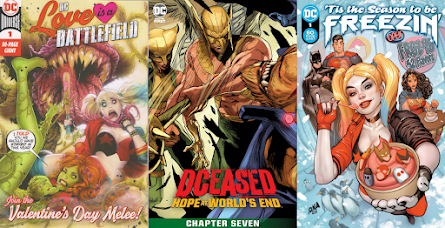 Comics
DC Love is a Battlefield (April 2021)
The current version of Hawkman, Carter Hall, had a story in the Valentine's Day anthology called DC Love is a Battlefield. It was only an 8-page story called "Together Forever" and the only story that featured Hawkwoman (Shayera Hol) this year. It was about Hawkman and Hawkwoman traveling through space together in their Soarship and also showed Hawkwoman in a green costume that matched Hawkman's instead of the blue one she wore in the most recent Hawkman series. It was a great taste of what we could have with a Hawkman/Hawkwoman regular series with the two of them traveling together through space.
'Tis the Season to be Freezin' (February 2022)
Another anthology, this time it was a winter issue minus Hawkwoman. The 10-page story featured Harley Quinn and the Blue Snowman with Hawkman showing up halfway through. It wasn't a bad story, and after a 10-month wait, it was nice to see.
DCeased Hope at World's End #7 (June 2021)
This isn't a Hawkman story, but there is so little to list here, I'll include it. Hawkman (Carter Hall) and Hawkgirl (Kendra Saunders) appear in Tom Taylor's elseworld story of zombies. Hawkman also appears as panel filler but does nothing in #11-12. Hawkgirl actually appears to survive but of course, Hawkman dies and becomes a zombie. 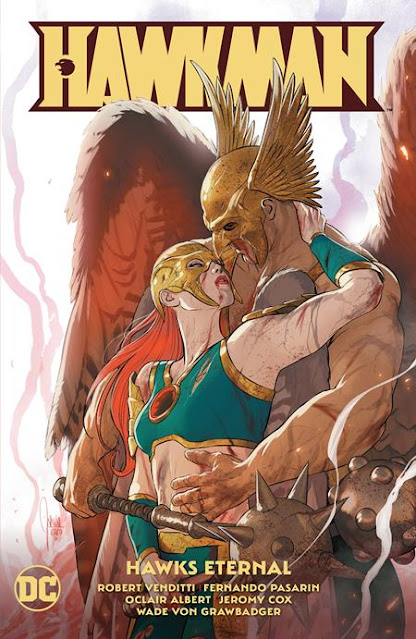 Hawks Eternal
The Hawkman series by Robert Venditti came to a close in November 2020, and the collection of the final ten issues was released in February. The entire series was a beautiful showcase of what Hawkman has been, is, and could be with the right writer, and the ending was something that the Hawks have never really been given. The entire series is in four trade paperbacks so if you haven't treated yourself to this series yet, go get it. You won't be disappointed. 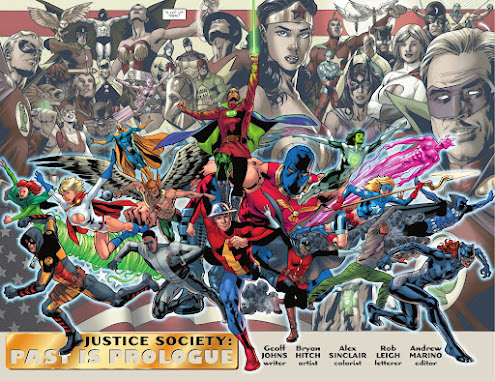 Another Unfulfilled Teaser
In the Stargirl Spring Break issue that was released on May 25, there was a big announcement concerning the Justice Society. Along with a one-page set-up featuring Degaton, there was a beautiful double-page spread of the JSA. It appeared that DC was announcing a new series by Geoff Johns and Bryan Hitch. But no date was announced and we never heard another thing about it. Bryan Hitch generously let the fans know a few months later that the series fell through and that it wasn't happening. Another disappointing tease by DC Comics. 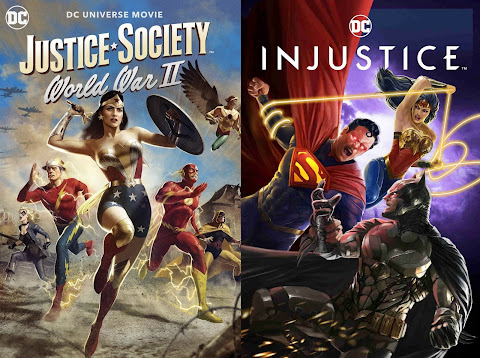 Justice Society World War II / Injustice
Hawkman was also in two of DC's animated features. The first was Justice Society World War II, which was released on April 27. It was yet another alternate universe story, which seems to give DC/Warner Brothers free rein to change anything about the characters as they want. It was badly written, parts of other stories were pieced together, and Hawkman was of course killed off in a meaningless death. The only plus was that Hawkman was actually given some dialogue. The voice actor was Omid Abtahi. He did a good job with it. Too bad they killed his character off.
The second feature was Injustice. Hawkgirl had been in the comics and games, but they inexplicably replaced her with Hawkman. I'm not sure why they did it because they gave him zero dialogue and just another death at the hands of Amazo. The story also felt rushed and was just a shortened version of the Batman glorification we saw in the comics. Both movies were huge disappointments, to say the least. 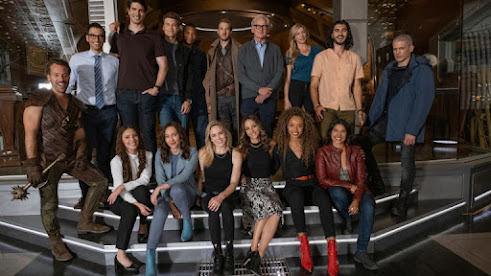 Legends of Tomorrow
The Legends of Tomorrow surprisingly had their 100th episode on October 27. The writing was so bad in the first season, I honestly never expected it to last this long. Falk Hentschel returned as Hawkman for the first time since the end of the first season in 2016. It was just a bit part with the other characters who had left the show. But I will admit I enjoyed the part where he smashed Captain Cold's breakfast plate. 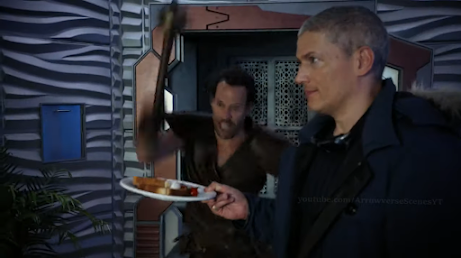 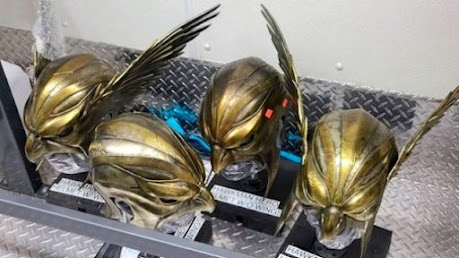 Black Adam
Filming for Black Adam wrapped up in July. There was hope that we would see Aldis Hodge as Hawkman in full costume for the first time during the DC FanDome event in October but we still haven't seen anything official. The only thing we got to see was some leaked photos of Hawkman's costume, including the helmets. These were immediately taken down from various sites and nothing has been seen since. Maybe a trailer for the Super Bowl? As for the story, my best guess is that Black Adam and Isis will take over Kahndaq and the Justice Society will step in to stop them. But along the way, the Intergang will show up and Black Adam and the JSA will have to join forces to defeat them... Or in true Warner Brothers' style, Black Adam gives Hawkman another death. All will be revealed on July 29, 2022! Hawkslayer
In Bendisverse, another Thanagarian who looks exactly like Hawkman appeared as the leader of the United Planets team called the United Order. He made 3 or four brief appearances in the Justice League series and also on the cover of Green Lantern #9 (but not in the issue). 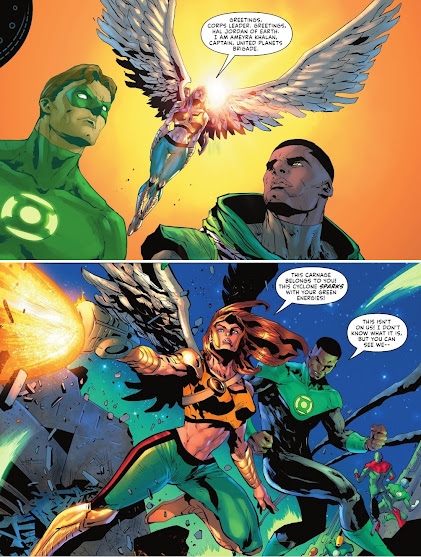 Ameyra Khalan
We also got a Hawkwoman look-alike named Ameyra Khalan. She appeared in 4 issues of the recent Green Lantern series. It appears that she is also a member of the United Planets, but she has not appeared with the United Order or Hawkslayer. Now if these two run into or appear with each other, things are really going to get confusing. As far as we know, they have no connection whatsoever with Hawkman or Hawkwoman, besides the fact that they are Thanagarian.
Note to future writers and artists: Things are confusing enough for the semi-casual Hawk-readers, so making these characters who look exactly like the originals isn't going to help anybody remember them. Something new and original that separates these characters from Hawkman and Hawkgirl/Hawkwoman would be better for everyone. 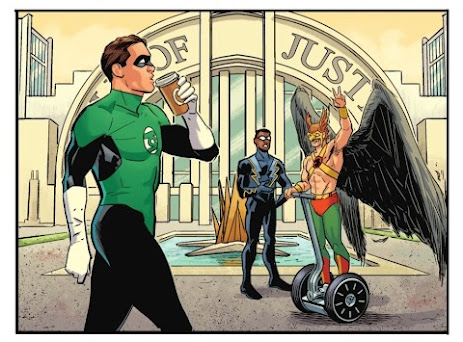 There were also many cameos and panel filler appearances during the year. According to Grand Comic Book Database, Hawkman had 41 appearances. None of them had much meaning or significance for the character. No, I take that back. One Star Squadron had Hawkman riding a Segway. This may be the most important revelation in years. 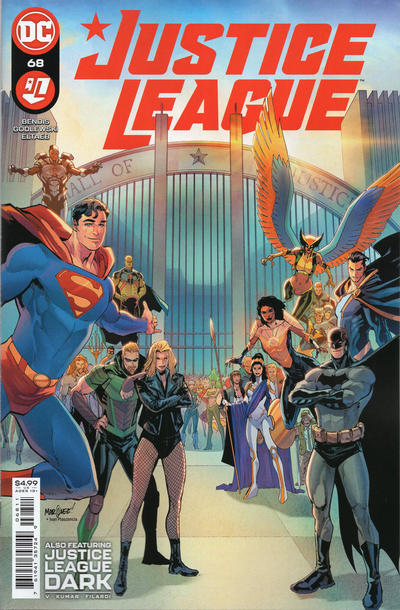 Hawkgirl (Kendra Saunders)
Hawkgirl also made a few appearances this year, especially in the Justice League series. She's been a member there since June 2018 and I'm frankly surprised to see that she has lasted this long. She has mostly been a supporting character, with quips for comic relief. Bendis' run appears to be coming to an end so hopefully, the new writer will keep Hawkgirl and give her the spotlight a bit more. 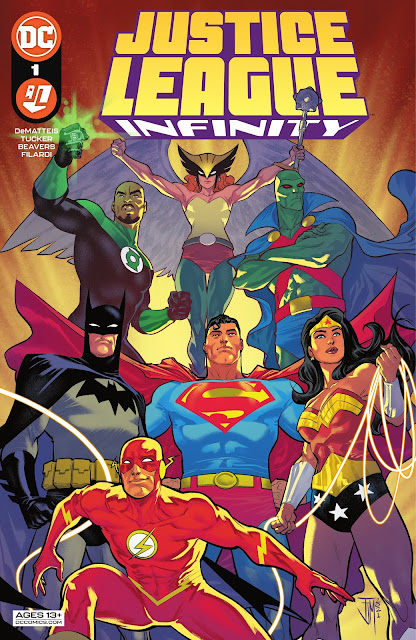 Hawkgirl (Shayera Hol)
Hawkgirl of the TV animated series returned this year. It appears that her relationship with John Stewart is going on in some way. This would allow this elseworld story to move forward and we'll eventually see the birth of their son Warhawk. The first issue had her in her classic costume, which is the best she has ever had in my opinion, but that only happened on the cover. In the issues, she is wearing the boring yellow tracksuit. Sad to see such a beautiful costume wasted. We also got another version of Hawkman; Amed of Earth-D. Hawkworld's 2021
For the Hawkworld fan sites, it was another year of steady growth! We added hundreds of new followers on Twitter and Facebook. In May, I created the Hawkworld.org domain for the blog, helping the number of views for the page to quadruple overnight. It took me over three years to get 100,000 views, but it looks like it will take less than a year to reach 200,000. I also started a Hawkworld podcast during the summer, but with no comic, it's been on the back burner for a while. I hope to get that running a bit more regularly next year. We celebrated Hawkgirl's 80th anniversary of her first appearance as Hawkgirl on the Hawkworld pages. I created a collage to commemorate her 80 years. In November, we celebrated Hawkman's 82nd anniversary. Robert Venditti (Hawkman, Superman '78) and Greg Zawsiza (Hawkman Companion) graciously joined me in giving out prizes for a giveaway contest! My personal project for this year's anniversary was a guide to all the comics that the Hawks have appeared in over the years. This took months and kept getting bigger and bigger. I have all the info listed here if you want to check it out.

So what do we have to look forward to next year?
Black Adam: This is finally going to happen next year. Aldis Hodge will appear as the first-ever live-action Hawkman to fly across the silver screen. We have no idea what the end result will be so fingers and wings are crossed. July 29, 2022, everybody!
Comics: The Hawkgirls are currently in the Justice League and Justice League Infinity series so hopefully they will get more attention in those books. Hawkwoman from the most recent Hawkman series has completely disappeared for almost a year. She was a great character so I hope DC will snap out of their Batman gluttony and give us a Hawkman/Hawkwoman series in the near future. The solicitations (up to March) have given us nothing so the wait continues.
Live-Action Hawkgirl: There are always rumors swirling around but I have seen some chatter here and there about Hawkgirl showing up in the next Wonder Woman movie. So we'll have to keep our Hawkeyes open for that.
Hawkworld: The sites continue to grow. The Facebook group should pass 6000 members soon, and Twitter appears to be headed for 8000 followers by the end of 2022. Instagram has been on the back burner a bit (I do have a full-time day job you know!), but there are over 1800 Hawkman/Hawkgirl pictures posted there if you're looking for Hawk art.

It was a year of waiting and several letdowns, but if you knew where to look, you could still find Hawkman and Hawkgirl/Hawkwoman flying in the pages of DC Comics in some form, so there's always hope that things will get better. Many thanks to all the fellow Hawkfans who shared their love for the characters on the sites and for all the support. I hope and pray that everyone and their loved ones have a safe, healthy, and prosperous 2022. Keep soaring, everybody!