Board Review of Hawkman No. 29: Final Justice Conclusion: In the End 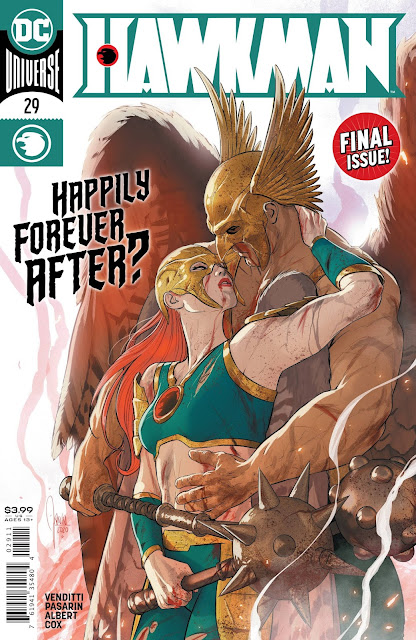 “There is only one truth that I know to be certain…I was made to soar.”

The journey with Hawkman that began in June 2018 came to an end today. It’s a bittersweet feeling, because I feel disappointed that it has ended, but elated that it was better than it had any right to be. When the article in the Washington Post in March 2018 announced the upcoming new series by Robert Venditti, I had no idea what to expect. A couple months before the series started, I had the honor of “meeting” Robert in a podcast on The Comic Source. He talked about Hawkman being a story of exploration and discovery. And that is exactly what we got. 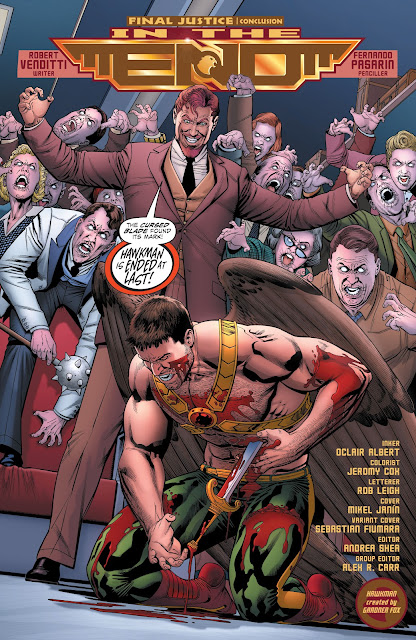 During the last two and a half years, we had the privilege to go soar through an amazing journey. We saw a new origin, familiar places, new locations, familiar faces, new characters, familiar powers, new abilities, and finally a love that is central to the story of Hawkman. Venditti says that he didn’t know much about Hawkman when he was asked to do the series, but as a Hawkman fan of 40 plus years, I can say that somehow, inexplicably, he was able to tap into what makes Hawkman and Hawkwoman work, and lift it up to new heights. The fact that it suffered in sales, and was finally canceled after 29 issues is irrelevant. If you haven’t read this series, you missed out on one of the best series DC Comics has had to offer.

At the end of issue No. 28, Hawkman seemingly took his own life to escape the crippling fear of death that had surprisingly overcome him after being released from the cycle of reincarnation. After being impartial to death as just another new beginning for so many millennia, the sudden reality that there would be no new beginning weighed heavily on him. While Hawkwoman/Shayera Hol is firmly in the present, the past and the future has always been on Carter Hall’s mind. With a past that is beyond understanding, and with a suddenly inescapable ending, it took an attack from Hath-Set to snap him out of his fear and face the future with hope. 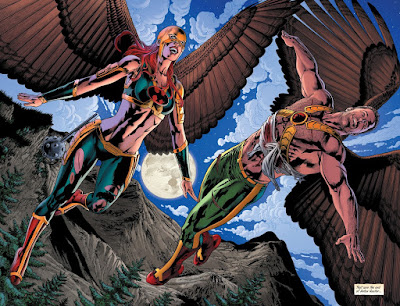 Before I read the comic, I had no idea how Venditti would wrap this up. I have the feeling that with hits from the ridiculous year-of-the-villain crossover, the pandemic, and the upheaval in DC Comics, the series was cut short. The Hawks had just been reunited and there were many, many more past and future stories to tell, but we’ll have to be happy with what we got. And I’m sure that many Hawkfans were relieved and very happy with this rather surprising ending.

Spoiler Alert
After seeing Hawkman and Hawkwoman die so many times, time after time, series after series, it greatly impacted me to see them grow old together. They fought together, stayed together, and grew old together. And they were still madly in love with each other. In a world filled with hate, divorce, sickness, death, and so many other things, we got to see our heroes live the life that we all wish we could live. Carter and Shayera lived together and grew old together. This has never happened in the history of Hawkman. This is what makes the story of Hawkman and Hawkwoman special. They have an undying, unwavering, steadfast love for each other that transcends everything else. Their true power doesn't come from the Nth Metal. Their power and strength come from their mutual love for one another. I hope and pray that this remains the foundation of the story of Hawkman.
Venditti mentioned that he has left a lot of toys in the toy box for the next writer of Hawkman. Boy, did he ever! There are so many: the remote-controlled lightsaber mace, the Soarship with the Nth metal engine and Zeta beam capabilities, the huge documented records of the universe, the friendship network, the bromance with Atom/Ray Palmer, the past lives on Krypton, Rann, New Genesis, and so many other places, Carter and Shayera’s love for the Justice Society, and the relationship between Hawkman and Hawkwoman that was finally, finally, finally brought back after decades of abuse. There is no Hawkman without Hawkwoman, and vice versa, so I would go as far as to say that the greatest accomplishment of this series was how it brought them back together. I just pray that if DC ever decides to give the Hawks another series, they will not repeat mistakes of the past and they will keep Carter and Shayera together.
The artists from this series also deserve a standing ovation. The last few issues by Fernando Pasarin, Oclair Albert, Wade von Grawbadger, Jeromy Cox, and Mikel Janin was just outstanding. I wish they could have been together for another decade. These are all names that will always grab my attention when I see them in other comics from now on. Much appreciation for their amazing work.
I also want to thank DC Comics for giving Hawkman a series that lasted as long as it did. I know their focus is mostly on Batman, but I’m glad someone up high gave Hawkman a chance. We now have a series that will be cherished by fans for a long time, so I thank them for that.

My special thanks goes to Mr. Venditti. During the last two years, he graciously shared his excitement and enthusiasm for the series with us fans on Twitter and Instagram. I have loved this character called Hawkman since my childhood, and what he did with Hawkman exceeded anything I ever thought I would see. As he promised on page one, Hawkman was made to soar, and soar he did. It may not seem like such a big deal, but Venditti’s Hawkman was a highlight of my month, something that I anxiously waited for like a kid counting down the days to Christmas. Some comics are made to amaze, some are made to horrify, and some are made to shock. Venditti’s Hawkman allowed Hawkfans to soar. It saddens me to see the series end, but for just a while, Venditti gave us wings to fly with the Hawks. I’ll never forget that.
Hawkman Vol. V No. 29
Writer: Robert Venditti
Pencils: Fernando Pasarin
Inks: Oclair Albert
Colors: Jeromy Cox
Letterer: Rob Leigh
Editors: Andrea Shea, Alex R. Carr
Cover: Mikel Janin
Variant Cover: Sebastian Fiumara
Rating: 10/10