Board Review of Hawkman No. 23: Miasma of Fear 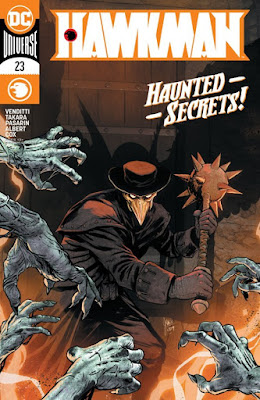 It was a long wait, 55 days to be exact, but Hawkman No. 23 was finally released. We were left in suspense about the story about a "Plague Doctor" in the 17th century Europe coming out while the world is fighting a pandemic in real-time. It was uncanny, to say the least, but writer Robert Venditti had the idea for the story back in October. And it leads right into a moment we've been wanting for a long time.

In issue No. 22, Shayera Hol/Hawkwoman and the Sky Tyrant both reached for the "Key" and were immediately transported to an unknown location. Issue No. 23 starts with Shayera and Sky Tyrant falling into darkness and a flashback story begins. It is eerily relevant to what is happening in the world today as Hawkman is a Spaniard named  Dr. Carlo Salon, helping people who have been stricken with the plague. Things turn bad and he is about to be executed when someone steps in to save him.
Hawkman's character wears the beak mask that plague doctors actually wore back in 17th century Europe. These doctors would fill the beaks with herbs and perfumes because there was the belief that the disease was in the air and the herbs would keep the doctors from breathing in the disease. (This is from my quick study of the costumes but it has a fascinating history that needs to be looked into more later.) These costumes are remembered even today. Venditti's knowledge of history and how he weaves so much actual history into Hawkman's background is incredible to see. Here is a depiction of the costume from 1841, and another from a recent Festival of Venice, where the costumes are often seen.

It seems that the story of the plague doctor was used to remind us of something very important about the relationship between Carter and Shayera. After the flashback ends, we arrive at the realm of the Lord of the Void. And after 23 issues of waiting, we are finally, finally given a scene that we have been waiting for. At first, it felt rather anticlimatic, but after reading it a few more times, it was just perfect. It is a panel that instantly goes into my list of greatest panels in Hawkman's history. All Hawkman and Hawkwoman fans need to read this issue.
Now the real battle starts. Hawkman and Hawkwoman have arrived at the realm of the Lord of the Void. We haven't seen this entity since issue No. 7, but it appears it is busy getting ready to make its move. This is the entity that started it all and we may be finding out more about it and the other entity that gave Carter and Shayera the power of reincarnation (I hope).
Venditti continues to give us panels that are so touching or full of impact. This issue was no exception. It seems like an easy read, but after reading it a few times over, you catch things you missed or didn't realize the first time. With Venditti, one read is never enough. That's good writing. The art was interesting with two pencillers. Fernando Pasaringave us the present story, while Marcio Takara did the past. Oclair Albert (inks) and Jeromy Cox (colors) handled both. The vibrancy of the lines and colors are so beautiful to look at. I hope this team stays together for the foreseeable future.
I don't want to give away too much of what happened, but there was a big payoff in this issue and all Hawkfans need to pick this one up. The whole dynamic of the story has turned and it just got twice as interesting. Big reveals appear to be coming up in the issues ahead. We finally got what we have been waiting for, and with the infection finally out of the way, it seems like the Hawks are where they are destined to be. It's been a long time since we've been able to say that, and it feels great.