Soar!: Board Review of Hawkman No. 6

Exploration and Discovery: this has been the theme of the Hawkman series by Robert Venditti (writer) and Bryan Hitch (artist) from the beginning. Since the first issue, we have been getting one piece of the puzzle at a time as he travels through time and space, looking for clues about himself and a way to stop the Deathbringers coming his way. We received the news that Hawkman is going to discover his true origin in issue no. 7, but the issue No. 6 that came out today (Nov. 14) had more than its share of discoveries. It appears that Venditti is setting us up for some major developments in future issues. Here's a review of issue No. 6 so if you haven't read the issue yet, go pick it up at a comic store or get it digitally and come back afterward. Don't spoil it! Go read it first! 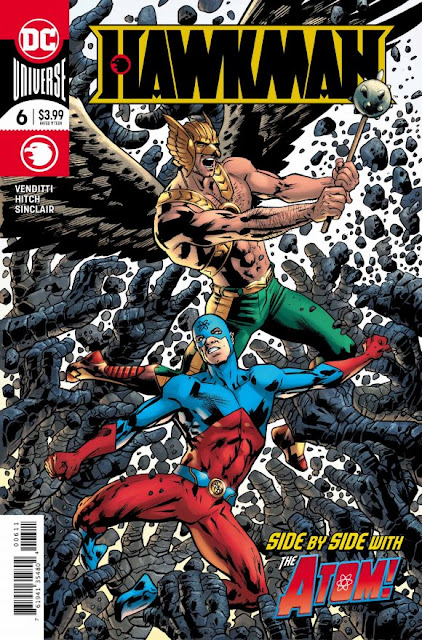 In the last issue, we discovered (I'll be using that word a lot) that Hawkman had previously had a life in the Microverse, home of best buddy Ray Palmer/The Atom, and that he had left something hidden for him to come back and retrieve later. Ray uses the "Ocean Theory" to help Carter understand how his many lives are actually intertwined, overlapping and not in chronological order. In other words, anything goes. They also discover that Hawkman had stashed away something made of Nth Metal on Moz-Ga, a sentient planet possessed by a powerful and cranky wizard who just wants to be alone. But that has never deterred these two before, so they go charging in. Of course, a battle ensues and the two heroes are fighting for their lives. Despite their predicament, you sense a happiness coming from the two heroes who are fighting side by side again. The smile on Hawkman's face says it all. 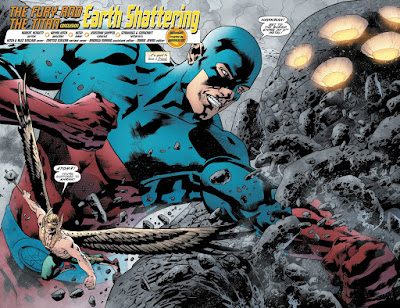 As Atom serves as a punching bag, Hawkman manages to reach the Nth Metal he had hidden away years ago. He was expecting a weapon to defeat the Deathbringers, but what he found was a ship. The whole scene where he is trying to get the ship started while Atom is yelling at him to hurry it up is hilarious. Only Hawkman would think to say that word. The flight console for the ship was brilliant and left no doubt that it's Hawkman's ship. Venditti threw a real surprise in there when they Zeta-Beamed back to Ray's lab. I was not expecting that! If I remember correctly, a Zeta-Beam is extremely hard to build but Hawkman used his knowledge from his life as a Rannian and built one on his ship! Another testament to the intelligence of Hawkman. 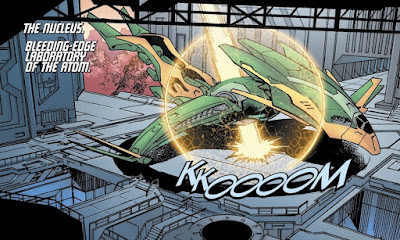 Once we get back to Ray's lab, we are given more pieces of Carter's past. Ray checks the history of the Microverse and finds the record of a hero named Avion (meaning "bird"). So Hawkman already had a knowledge of Earth's languages and knew how to build a Zeta-Beam before he lived in the Microverse. NUTS!

Carter decides to keep going and see where the ship will take him next. Does this guy ever sleep? I think the last time he slept was in issue No. 3 back on Dinosaur Island. Nth Metal does allow him to go weeks without much sleep but this guy needs a break! The parting of Carter and Ray is bittersweet. I sure hope these two run into each other again soon. One of the best friendships in comics. "It's never easy to say farewell. But wherever you go, you carry them with you."

When Carter places the discs on the console, the ship sets its coordinates and takes off. It also gives him access to the coded files which probably contain his history. The floor gave way in a way that reminded me of the first issue when he was with Madame Xanadu. The next issue might immediately open up with his origin story.
Finally, we are given another look at the Deathbringers, along with what appears to be their leader. He refers to Carter as "Ktar". After thinking about it a for a while, this villain reminds me of Deron Ved. His wings and expression seemed a bit similar to that character. But I'm probably way off.
The art by Bryan Hitch and Jeremiah Skipper continues to amaze. Hitch did all the pencils and inks himself. That is just amazing. Most of the issue is rocks, rocks, and more rocks. But he doesn't go easy on the detail at all. The ship's design is very cool and that console design lets Hawkman stay in a soaring position. Allowing him to fly the ship as he would do on his own. Very hawk. Another beautiful thing about Hitch's Hawkman is his wingspan. Those wings must be 20 feet wide. Skipper continues to be brilliant as well. The dark hue he gave Atom's costume while they were fighting Moz-ga seemed to add to the desperation of the moment. Every time I look through it, and I do this often, I find another detail or something I missed. Cannot wait to see what they do with Krypton!
The first five issues were fun, but this issue really took off. It had its moments of humor, desperation, panic, revelation and another farewell. After you finish reading, you are left with one thought; Venditti and Hitch have made comics truly fun again. This comic is a must for any fan of the superhero genre of comics.

Hawkman No. 7 is due to be released on December 11th!