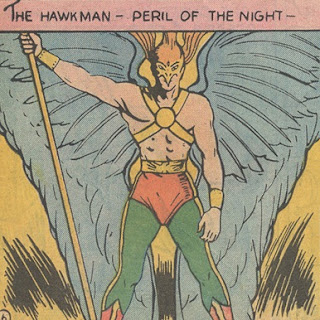 Revelation often comes with a thunderclap, and forces one to take notice. Sometimes it comes quietly, during a quiet afternoon, with a casual view out the window, a small bird, and a tiny twig. Whether it starts with a loud shout or a quiet flutter, a revelation can become something that grabs hold and never lets go. Starting with Gardner Fox’s inspiration in the late 1930s, a character quietly came into existence and even after seventy-eight years, with the amazing creativity and talents of many writers and artists, it still thrives to this day.

Gardner Fox has told the story of how he was sitting in his workplace and looking out the window when he noticed a small bird fly by, pick up a twig and fly off. This was the inspiration for the hero we know as Hawkman. When Hawkman was created, there’s no telling how Gardner Fox expected the new superhero to be received by the public. Maybe the expectations were low. Hawkman was not the main character on the cover of the first comic he was in. That honor went to The Flash. The first Hawkman story was the third of six features. But there was something about Hawkman that made him stick around. The massive wings, the bare chest, the bird helmet, and the use of ancient weapons made him a figure that was hard to forget. Man has always dreamed of the ability to fly and here was a hero who truly represented that desire. By the time the seventh issue of Flash Comics came out, Hawkman was being featured on every other issue until the end of the comic’s run in 1949.

During the Golden Age of comics during the 1940s, Hawkman never did get his own feature comic. He wasn’t without his own achievements though. He continued his run in Flash Comics and was also featured in All-Star Comics from the beginning. He was a charter member of the first superhero team, the Justice Society of America. While other heroes came and went, Hawkman was the only hero to be featured in every Justice Society adventure until the final issue in 1951.

With the end of All-Star Comics, Hawkman disappeared for about ten years during the 1950s but Fox and Joe Kubert brought him back in 1961. While the new Flash and Green Lantern were given completely different looks from their Golden Age counterparts, Hawkman came back almost exactly the same. Even though he was now an alien from Thanagar, the wings, the bare chest, the bird helmet and the ancient weapons were still there. The imposing image of Hawkman is one of his greatest assets, and even though Fox and Kubert had the chance to completely change him, they stuck to what they believed appealed to the readers. Over the years, he has been given different looks and powers by writers and artists such as Murphy Anderson, Roy Thomas, Tony Isabella, Richard Howell, Timothy Truman, John Ostrander, Graham Nolan, Steve Lieber, Geoff Johns, Rags Morales, Joe Bennett and Philip Tan, but he has always returned to the basics; the wings, the bare chest, the weapons, his straightforward sense of justice and his relationship with Hawkgirl.

Probably the greatest “asset” of Hawkman has been his partner, Hawkgirl. That term is used lightly, because Hawkgirl is nobody’s asset. She debuted even before Wonder Woman, and has become a popular superhero in her own right, with or without Hawkman. While other heroes have sidekicks, Hawkgirl has been Hawkman’s love interest, his wife, his partner, and his superior in many ways. Their love for each other, their ability to work together as a team, and their individual attributes are some of the greatest things about the story of Hawkman.

Hawkman has been through several reboots, retcons and rewrites over the years. Many say that he has the most confusing origin in comics and are turned off by that. Hawkman has been in several comics over the years, but none have lasted longer than four years. He has been killed off multiple times, so often that many younger comic book fans believe that his superpower is his ability to come back from the dead. As of November 2017, he doesn’t have his own comic book, there is no movie in the works, and he has very sporadic television appearances. So why is he still around? Why do most comic book readers still know his name and have a general idea of who the character is even after 78 years? Hawkman represents many things to many people. He represents flight, one of the greatest desires of man. He represents strength with his bare-chested look and powerful wings. He represents justice with the huge mace he carries around. He represents order, in the way he is unwavering in his beliefs and effort to do what is right. He represents eternal love with his never-ending love for Hawkgirl. He represents a mythology that has yet to be fully told.

What started with a small bird flying past an artist’s window has become an iconic and permanent part of American pop culture. As long as there are comic books, Hawkman will probably continue to be a part of it, big or small. Currently, there are plans for Hawkman. His story is a huge part of the Metal event by Scott Snyder that is currently running in DC Comics. There is an issue by Jeff Lemire coming out in December, which could be just the beginning. Hawkman is a story that started 78 years ago but the next chapter is just getting ready to start.
Posted by Tim Board at November 10, 2017