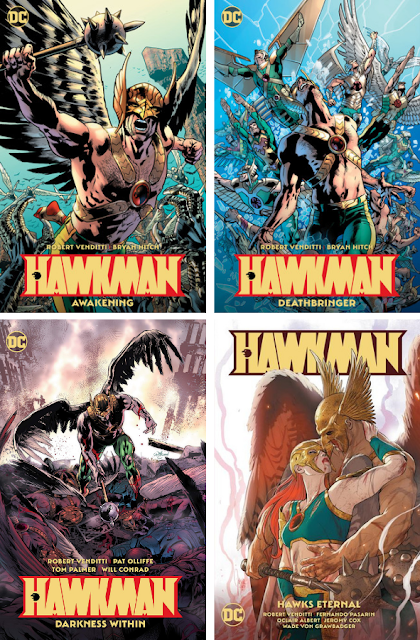 Hawkman doesn't sell as well as some other comics. There's no denying that fact. There are several reasons for that of course. DC Comics barely promoted the recent Hawkman series after the first couple of issues. After starting with over 40k in sales, the lack of promotion, the uninspired Year-of-the-Villain event, the pandemic, and other things gradually pulled the series down to around 12k in sales and it was finally canceled after 29 issues. One of the reasons could be that many don't like the looks, background, or overall setup of Hawkman. There can be many reasons.
When a writer takes on Hawkman his job is to make Hawkman a relatable, exciting, attractive character. He can maybe give the character a new look, new powers, a new origin, a new base of operations, a new lover, new villains, etc. He can reach into that hero's past and change and "improve" him in a way that he thinks will make the character better than before. That's just common sense. That's what every writer wants to do. Sometimes it works and sometimes it doesn't.
Back in 1993, Hawkman Vol. 3 picked up from the recently ended Hawkworld series. It gave us a Hawkman with a brand new look. During the middle of the run, Zero Hour happened and suddenly we had a Hawkman whose wings sprouted from his back and he was basically a "Hawk god." But it didn't work. Shayera was gradually pushed out to a small supporting role, and the series seemed to flounder around until DC finally ended it in 1996. At that point, Hawkman was considered "nuclear" and DC didn't want to use him at all. It took six years before Hawkman was finally given another shot at a series. I do have to add that DC's constant, repetitive, same-name crossover events have often derailed Hawkman stories. Hawkman Vol. 2, Hakworld, Hawkman Vol. 3, Hawkman Vol. 4, Rann-Thanagar War, Rann-Thanagar Holy War, Hawkgirl, and so have been constantly disrupted by DC's reset button aka crossover events.
Since then, we've had several series, none of which have passed the 50 issue mark. Although any character not in the Trinity passing No. 50 may become a thing of the past soon. After The Savage Hawkman ended after 21 issues in 2013, we had to wait five years for another series. We did get a 6-issue series during that span but it was another long wait.
When Robert Venditti took over Hawkman, his goal wasn't to give us a new Hawkman. His goal was to make Hawkman a more relatable, more exciting, deeper, and more interesting character. His goal was to help Hawkman shed the label of "most confusing character." He gave Hawkman a new origin, a new reason for why he does what he does, a new spaceship, new friends, new villains, etc. He gave Hawkman even more interesting past lives and connections to other heroes that we had never seen before, like Krypton, Rann, and even New Genesis.
He also brought back and strengthened what makes Hawkman unique in the DC Universe. He used reincarnation to explain the inconsistencies of the past. He took Hawkman's iconic mace and make it an incredible weapon. He built upon Hawkman's connection to history and archaeology. He deepened the mythology of the Nth Metal. And he brought back and strengthened one of the greatest love stories in comic book history.
And most importantly, he didn't destroy the character for the sake of story-telling. He built up the base of the character. He added so many doors to countless other possibilities for stories. He left as he put it, "a lot of toys in the toy box" for future writers. If a new writer is given a chance to do a Hawkman series, I hope he reads Venditti's gift to the character of Hawkman. There is a treasure trove just sitting there for future writers. I hope DC Comics will give a writer a chance to explore the potential of Hawkman some day soon.
Posted by Tim Board at August 01, 2021