Board Review of Hawkman No. 27: Final Justice Part One: Seems Like Old Times 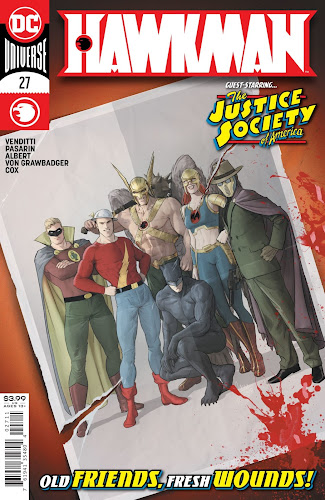 The long-awaited issue of Hawkman No. 27 has finally been released. Ever since the jaw-dropping cover by Mikel Janin was released back in June, Justice Society fans have been waiting for this one. With the announcement of the ending of the series coming in November, this issue took on a whole different look and meaning.
On the one hand, we had Hawkman and Hawkwoman joining up with the Justice Society in the 1940s. Flash (Jay Garrick), Green Lantern (Alan Scott), Sandman (Wesley Dodds), and Wildcat (Ted Grant) appeared as they battled the Injustice Society. It was pure comic book fun that many of us grew up on. This issue is a perfect example of why so many fans are hoping for Robert Venditti to take on a JSA book someday. 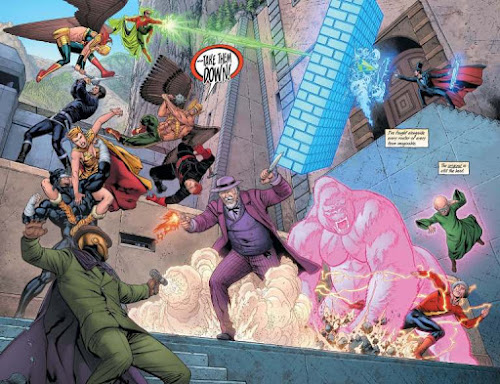 On the other hand, the book has a feeling of finality to it. With the knowledge of the book being canceled, the book felt ominous. The sudden fear of death that Carter Hall is experiencing just made it more so. We are now reading the final chapter of Venditti's Hawkman, and as a Hawkman fan who has enjoyed this series immensely since it started over two years ago, it felt dark and heavy.
In the last issue, the Hawks finally defeated the Lord of the Void, and with that victory, Hawkman/Carter Hall/Ktar Deathbringer finally, as Black Widow would say, wiped out all the red in his ledger. He had finally atoned for his sins, and he and Shayera were released from the cycle of reincarnation. As a reward, they were given two gifts; they would be together, and they could go to any place in time and space to live out their final life. They both immediately chose Earth 1940, and so here we are. It appears that Hawkman is the leader of the JSA, and Shayera is also a member.
But during the battle, when he is suddenly confronted by the threat of death, Hawkman is overcome by something he has not felt in thousands of years; the fear of death. With this fear almost paralyzing him, we see his very first adversary sense the same thing and prepare to kill Hawkman and Hawkwoman one final time.
It was a bittersweet issue with the joy of seeing the JSA in action, but also with the end of the series approaching.
The art was top-notch as always. Fernando Pasarin's style is bold and a bit in-your-face, and inkers Oclair Albert and Wade von Grawbadger along with Jeromy Cox's colors make the issue worth going back over again a few times just to look at the art more closely. The attention to detail is truly amazing.
Venditti has a knack for writing team books. In recent times, he wrote a 12-issue Freedom Fighter series that was fun, horrifying, and extremely satisfying. He carried the Justice League for a few issues. Venditti doesn't get bogged down in too much overthinking (as Hawkwoman yelled out a couple issues ago) and lets the characters fit together for a story that's not over-complicated. A comic book shouldn't make you feel like you're studying for a semester final, and Venditti rarely ever lets that happen.
Hawkman is having to deal with the reality of death, and we are having to deal with the reality of a great comic book series ending. But Venditti's Hawkman is not about death, but about life and soaring above it all. It will be interesting to see how Venditti brings this series to a close. I'm pretty sure we will be soaring in the end, and I'm looking forward to it.
Rating: 10/10 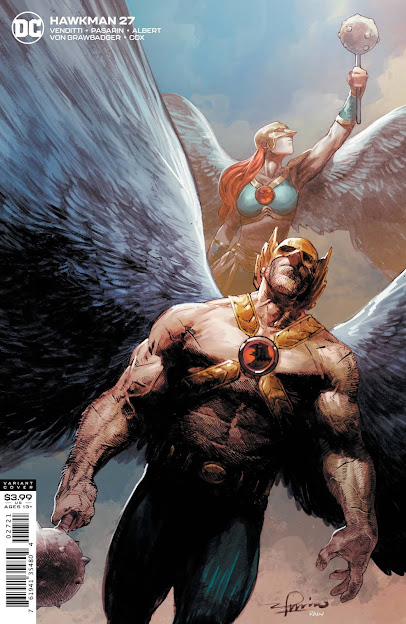