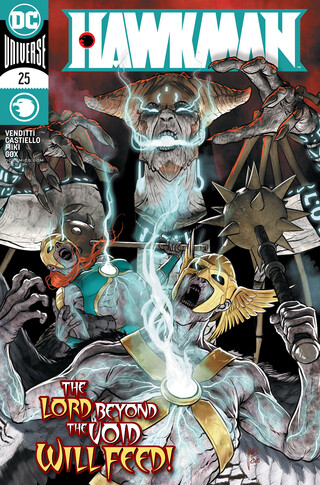 At the end of the last issue, we were left with the phrase "The Power of a Thousand Lifetimes." My guess was that both Hawkman and Hawkwoman would call their former lives to the present in the way Hawkman did when he took down the Deathbringers to fight the Lord of the Void (LOTV). That's not what happened. We got a long-awaited reveal, a puzzling comment about a weapon, and the true meaning of the aforementioned phrase. Slight spoilers ahead! 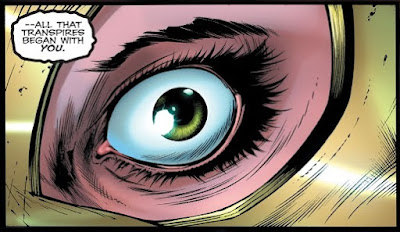 We finally got the origin of Hawkwoman. As her god said to her, "All that transpired began with you (Shrra)," it appears that Hawkwoman was the catalyst of everything that has happened over the years. The origin in the issue was probably not too surprising, but it was good to finally see the true connection of Hawkman and Hawkwoman. Is there a love older and stronger than this one in the DC Universe? Maybe there is, but this one would have to be up there. This brings the story of the remains of Prince Khufu and Chay-Ara being the power source for a power battery all the more poignant (Green Lantern No. 46).

There appears to be some kind of bond between Hawkman and his mace. This was mentioned just a bit by the LOTV, but this has never really been brought up before so it left me wondering if there was more to be revealed about this. But I'm really loving Hawkman's new mace so I would hate to see it destroyed.
The Lord of the Void and Shrra's God of Life and Reincarnation (my title) appear to have some kind of connection. I'm curious to find out what that is. There have been times when I thought the two were one and the same. Perhaps we'll find out in the climax.
The battle was a bit disappointing as Hawkman and Hawkwoman were pretty powerless against the LOTV. They kept trying with the same results and the issue ended in the same way as the last. I'm sure the issue is setting the stage for the grand battle, but the battle scenes were a bit disappointing. Time to channel those past lives, Hawks! 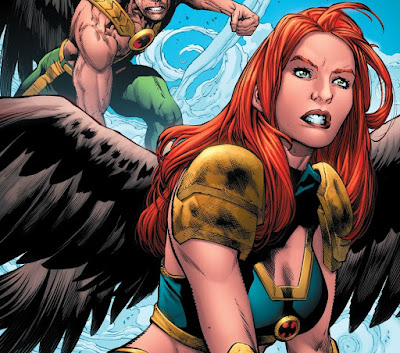 Fernando Pasarin and Oclair Albert were absent for this one issue so Marco Castiello and Danny Miki handled the art this time. Shayera looked absolutely beautiful in this issue. That full page of her was jaw-dropping awesome. Pasarin and Albert will be back next issue but I wouldn't mind seeing more of Castiello's Hawkwoman either. Colorist Jeromy Cox continues to bring us a beautifully colored book and I'm especially loving the colors he uses for Shayera's red hair. We are really fortunate to have such artists bring us such amazing art each month.

It's hard to say what is going to end this battle; the Hawks love for each other, their past lives join them in battle, or Shrra's god shows up for a massive battle. August 11th can't come soon enough!

As the current story arc comes close to its grand finale, I can't help but wonder what is in store for the Hawks next. "Everyone dies!" is the ominous title of the next issue and it appears that they are heading to the past to meet up with the Justice Society in No. 27. Fans keep speculating on when the series is coming to an end, but now that the Hawks are finally back together and the foundation is set, I hope Venditti will continue writing their stories for at least a couple more years. The flight of Hawkman and Hawkwoman has only just begun.