On April 25, 1941, in All-Star Comics No. 5, Shiera Sanders became Hawkgirl for the first time, and so began the story of one of the most famous and recognizable characters in the history of DC Comics. Hawkgirl may have been a sort of sidekick to Hawkman in the beginning, but she is no man's sidekick now. She is one of the most interesting and powerful characters in comics, with her own set of powers, abilities, and history. I could have gone into her history to celebrate Hawkgirl Day 2020, but this year I thought I would list my favorite Hawkgirl stories. I'm sure every Hawkgirl/Hawkwoman fan has their own favorites, so my apologies in advance if they aren't on the list. I also tried to do a countdown of best stories, but that proved to be difficult since I like them equally. So here are my favorite Hawkgirl/Hawkwoman stories in chronological order. Let us know which is your favorite in the comments!

This story is before Shiera becomes Hawkgirl, but I couldn't leave it off the list. It is one of the funniest stories I have ever read in comics. Most Golden Age superhero comics seemed to have a humorous undertone to the stories, but writer Gardner Fox obviously had a lot of fun with this one.
It's only the second issue since Carter and Shiera ran into each other, triggering their reincarnation memories. A man named Alexander is out to conquer the world. Hawkman wants to go after him but Shiera says he promised not to go flying off anymore after they get married. But Hawkman says they're only engaged so he can do what he wants. But Shiera one-ups him and says they are invited to dinner at Alexander at 10 sharp, and that it's "strictly formal." Carter's reaction is priceless.

So they head off to the dinner, but Carter is worried. But not to worry, Shiera has the Hawk costume and even picked out a few weapons for him. It's pretty obvious she has been planning the thing and is in complete control of the entire situation. I could go on but the story is just one hilarious line after another. Jennifer DeRoss, the author of Forgotten All-Star: A Biography of Gardner Fox, mentions this story in her book. You can find it in The Golden Age Hawkman Archives Volume 1!

This story showcased Hawkgirl's intelligence, expertise, and powers. An archaeologist tries to get in touch with Katar, but gets Shayera. He disregards her completely but she goes out to help him anyway.

We see the following:
1. has more knowledge about archaeology than most PhDs on Earth
2. identify cultural artifacts as good as Katar
3. can read Egyptian hieroglyphics Assyro-Babylonian cuneiform
4. writes the articles in the American Geographic with Katar
5. can recognize alien languages, including Kryptonian
6. neutralize a gravity pull with her Nth metal belt
7. can communicate with birds like Hawkman can
8. saved Superman from certain death
This issue really highlighted Hawkgirl in a great way. I definitely recommend all Hawkgirl fans to get a copy if they can find one!

Throughout the Silver and Bronze ages, Hawkgirl did have her moments, but they were usually alongside Hawkman. Tony Isabella's version of Hawkwoman showed off her abilities more than ever before. In Hawkman Vol. 2 No. 6 (January 1987), Hawkman is sidelined with an injury, and Hawkwoman (Shayera Hol) goes after Lion-Mane herself. She gets her nose broken, but she uses her flying abilities and smarts to defeat him. It showed Hawkwoman as completely capable of handling a villain herself. The cover is also one of the greatest Hawkwoman covers ever.

In the summer of 2000, we were treated to an unexpectedly fantastic story by Ben Raad and Michael Lark. It's a complete stand-alone story, but it is IMHO of the greatest Hawk stories ever written. Shayera is wanting to return to Thanagar and start a family, while Katar wants to continue their work on Earth. During the story, we see that Shayera's faith in the ancient Hawk gods is stronger than Katar's. There are plenty of scenes where she makes a stand and proves to be more than capable of taking care of herself. All through this series, the love that Katar and Shayera have for each other is clear, and they are given a gift from the gods at the end of the story. It's been twenty years since this one came out, and I have always wished we could have seen Raab continue his story. 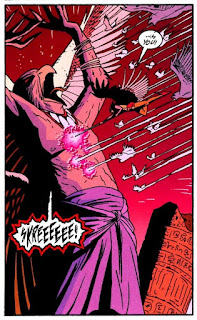 Kendra Saunders first appeared in the JSA series in 1999. Along the way, we found out about who she is or thought she was, and her new relationship with Hawkman. In this issue, we are introduced to the daughter that Kendra had in her teens before she became Hawkgirl. She gave the girl (named Mia) up for adoption to a couple that lives in Oregon. Kendra gets to meet her and take her for a ride through the sky. The scene with Speed Saunders is also a touching moment. 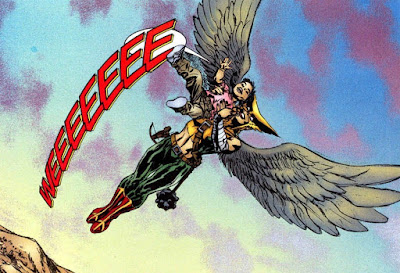 The year 2003 was a great year to be a Hawkgirl fan. She was in the Hawkman and JSA series, there were special issues on the side, and she was featured in TV's Justice League series. In Hawkman Vol. 4 No. 15-17, we were treated to the return of Shayera Thal of the Hawkworld series.
Shayera Thal must have one of the most tragic stories in DC Comics history. She was born to a 13-year-old girl and was discarded or basically just thrown away into the Downside slums to avoid any scandal. After her mother was killed in a terrorist bombing, she was brought back to the high side to take her mother's place but ended up joining the Wingman police force. She was sent to Earth with Katar Hol to capture Byth, but ended up as fugitives themselves. She fell in love with a Chicago man but he was killed by Byth. She eventually fell in love with Katar but he was merged with Hawkman and the Hawk avatar and gradually lost his mind. Completely shut out from Katar, she left him and joined the police force in Detroit. She was forced to watch as Katar was sent into the Hawk realm, never to return. She returned when she heard that Hawkman was in St. Roch, but was let down when she realized that Katar no longer existed. She captured Byth and took him back to Thanagar and joined the Thanagarian police force again. She was finally killed by Blackfire during the Rann-Thanagar War and Captain Comet sent her body into the Polaris sun.
In these three issues, we get to see the love Shayera had for Katar and just badass of a character she was. The current Hawkwoman in the Hawkman series has made some references to her so let's hope we get to see a Hawkwoman like this again. 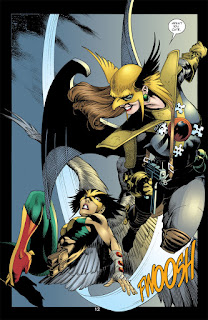 Hawkman Vol. 4 No. 42 (September 2005)
In this issue, the Purple Pilgrim comes after Kendra and her uncle Speed Saunders. This villain was a man who was condemned to a 17th-century judge named Sanders. The Purple Pilgrim swore revenge on all his descendants. To escape the villain, the Sanders family even changed the spelling of their name to Saunders. This is why we have Shiera Sanders and Kendra Saunders. In this story, the Purple Pilgrim finds them anyway and attacks Speed. Hawkgirl grabs the Claw of Horus and blows the whole street up to blast the villain. This is the only time we have seen Hawkgirl use the Claw of Horus, but it was awesome. More, please.

The Hawkman Vol. 4 series continued for 49 issues, and then the name of the series was changed to Hawkgirl. The Hawkgirl series continued for 17 issues, from #50-66. The series wasn't particularly well-written, but the last two issues were good. It attempted to resolve the way-too-long, ongoing, non-relationship that Carter and Kendra had been involved in since 2001. Kendra went up against Hath-Set and during the battle, Shiera took over Kendra's body and defeated him. She made her final goodbye to Carter and Kendra finally had full control of herself again. It was a good ending to a series that could have been better.

I debated adding this series to the list. The Blackest Night series inexplicably brought back Shiera at the end, and we never saw Kendra again until the Metal series in 2017. In the Brightest Day series, we finally had Hawkman and Hawkwoman back together again. They were completely in love, a real team again. Until issue No. 18, we saw an absolutely fierce Hawkwoman who went up against Hath-Set (again). We even found out that the remains of Khufu and Chay-ara were used as the energy source for the Zamaron's power battery because their love was so powerful. It was a great series with a very, very disappointing ending. 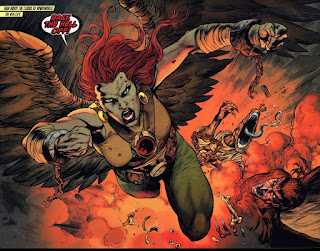 Hawkwoman finally joined the Hawkman series a few issues ago and wow, what a return! Shayera Hol is currently the Empress of Thanagar, while Carter Hall is an archaeologist on Earth. The two had not met since they returned after the Metal series. But Shayera finally showed up to help Hawkman who had been taken over by Sky Tyrant. She absolutely manhandled Sky Tyrant, showing her combat techniques. She also mentioned her past lives and how she is connected to Hawkman. It was a great moment in Hawkgirl/Hawkwoman history and I hope it's just the beginning of a great chapter in Hawkwoman's story. 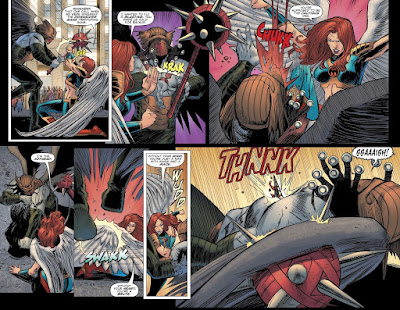 I'm sure there are many other stories that are the favorites of comic book fans. Without a doubt, Hawkgirl is one of the most iconic, interesting, and awesome characters in the history of comics. Let's hope she gets the spotlight she deserves in the near future.
Posted by Tim Board at April 25, 2020