In Hawkman Vol. V No. 7, released on December 12, 2018, Ktar Deathbringer appeared for the first time. According to writer Robert Venditti, he is the very first Hawkman, the Hawkman from which all other versions ever created came from. It is a shocking story about a murderous general who committed genocide with his army on planet after planet for many millennia. In this article, I want to take a look at the character and discuss why Venditti took the bold move of giving Hawkman such a dark, evil origin. 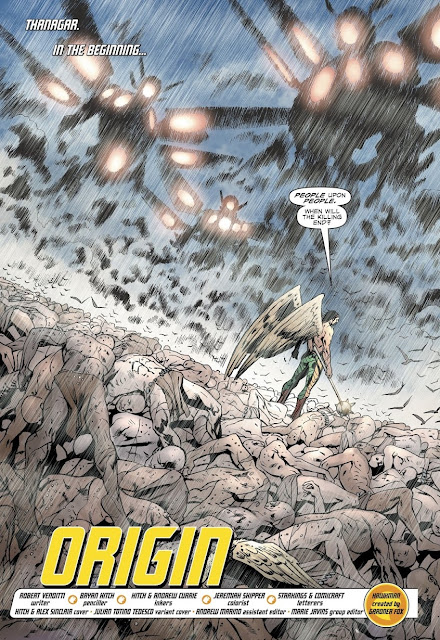 First, let's look at the information we have about Ktar Deathbringer so far. At the beginning of Hawkman No. 7, we open the comic to find vultures feasting on dead bodies. We turn the page and immediately find a winged character standing in a field of dead bodies. It's a very shocking sight. As far as the eye can see, there is nothing but bodies rotting on a battlefield and being eaten by birds. Ktar is the general of a genocidal army, going from planet to planet and sacrificing thousands upon thousands of the planet's inhabitants at an altar on the planet Qgga. This is a lifeless, broken planet that sits above some sort of swirling gateway. This is where the sacrificial pillar to their unnamed entity stands. He calls this entity "Lord" and proceeds to sacrifice over 10,000 captives by throwing them into the swirling gateway. It appears that this entity requires sacrifices to store up enough power to come over into Ktar's dimension. There are no less than 13 planets that are listed or shown where the same thing happens, including Thanagar, Krypton, Rann, and Earth. This is the purpose of Ktar's existence, along with his army. Ktar's right-hand man is Idamm, who is more bloodthirsty than Ktar and relishes the killing.

Right from the beginning, we see that Ktar is weary of the killing. He goes from world to world, killing again and again, doing the same thing over and over. He goes through the motions but starts questioning if he is doing the right thing.

Right on cue, a red-haired woman appears. She approaches him fearlessly, but Ktar spares her. Inexplicably, she begins to appear on each planet the Deathbringers destroy, haunting Ktar. It appears that the other Deathbringers cannot see her. Her presence slowly breaks down Ktar's defenses, and he begins to realize the error of his ways. He finally rebels against the entity and the battle between Ktar and Idamm begins. 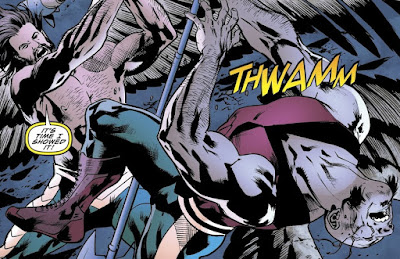 Ktar accepts the fact that he must sacrifice himself to defeat the entity and encourages the Thanagarians, who they were about to sacrifice, to die with him and seal off the gateway which the entity was going to come through. Idamm attacks Ktar again and impales him with his ax, but Ktar and the prisoners sacrifice themselves to successfully destroy the altar, seal off the portal and send Idamm and the Deathbringers into the other realm as well. 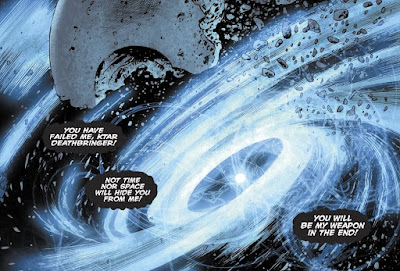 Ktar lies dying from his wounds, and the woman appears again. She takes his hand and before he dies, he asks her name, but we never find out. Many, including myself, believe that this is the first life of Shiera/Hawkwoman. Venditti has given us some small bits of clues or info throughout the series but she has yet to be revealed.

Ktar awakes in a place littered with skulls as far as the eye can see, the results of his murderous rampages through the universe. Suddenly, another unseen entity speaks to him, asking him if he is ready to be judged. Ktar is ready to be erased from existence. The entity tells him that it has "long sensed something...more" in Ktar. It sees some good in Ktar and gives him a choice; accept his final death, or choose to be reincarnated again and again across time and space, giving his lives to save and protect people, until he has saved as many people as he killed. Ktar accepts this chance for redemption and atonement. And thus begins the story of Hawkman. 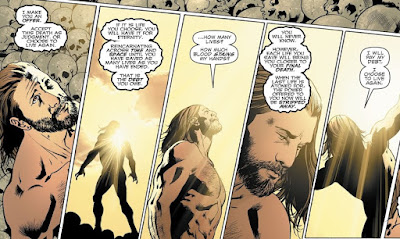 It may appear that we have a hero who committed genocide many times over. Despite the lives he may have lived and all the lives he has saved over the years, there are some fans who have expressed disappointment in this origin. Why did Venditti make a genocidal murderer the origin for Hawkman? How can we root and embrace such a character?

After this issue was released, I thought a lot about the direction that Venditti was taking the character. This origin gave a whole new background to Hawkman that isn't heroic or good. Sure, he didn't kill the red-haired woman and he stopped the evil entity from coming, but he led an army to commit genocide countless times.

As I thought about it, I remembered about one character that seems to have a similar background, although it is in reverse. I think we can find the story of Ktar Deathbringer to be the heroic origin Venditti meant it to be. The character I'm comparing him to is Lucifer from the bible. Whether you read the bible and believe it or not, the story of Lucifer is a fascinating one. First, check out these verses from the Bible.

"How you have fallen from heaven, morning star, son of the dawn!

You have been cast down to the earth, you who once laid low the nations!

13 You said in your heart, “I will ascend to the heavens;

I will raise my throne above the stars of God;

I will sit enthroned on the mount of assembly, on the utmost heights of Mount Zaphon.

14 I will ascend above the tops of the clouds; I will make myself like the Most High.”

15 But you are brought down to the realm of the dead, to the depths of the pit."


In the Bible, we read about Lucifer, the most highly acclaimed and powerful of the angels in Heaven. He was their general and they served a higher being. That is what they were created for; to serve God without question. However, something happened to Lucifer and he rebelled. And because of that rebellion, he was cast out, and he has been bringing pain and misery to creation ever since. 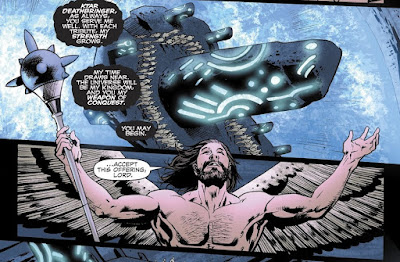 I thought about this biblical character and thought of Ktar Deathbringer as a kind of reverse Lucifer. Instead of being created for a good entity. he was created for an evil one. He was a mindless servant in the beginning, but he eventually broke away from the entity's control and realized what he was doing was wrong. Instead of challenging the God of the Heavens, Ktar challenged the evil entity and was successful in defeating it. He was also judged, but because of his heroic acts and willingness to pay for his deeds, he received the gift of reincarnation and a chance to atone for his acts.

Idamm says something that seems to imply that they were created by the entity for a purpose.

Idamm says, "if we were meant to grow weary..." This could mean that Ktar, Idamm, and the Deathbringer army were created by the entity to serve him, much in the same way God created Lucifer and the other archangels to serve him. Which would mean that Ktar was able to break away from what he was created for and tried to make it right.

When I read this new origin, this was the conclusion I came to. Hawkman seems to be a reverse version of Lucifer. He rebelled against the reason he was created for, he sacrificed himself, expected to die, but was given a chance for redemption and atonement. What he did until he was able to break free from the control of the entity will always haunt him and his decision to make it right will be the reason why he does what he does. Instead of being the murderous warrior that he was, he broke free and became a heroic savior.

Why did Venditti give us this origin? He has stated in podcasts and interviews that he set out to clear up Hawkman's story. He took what Gardner Fox, Geoff Johns, and others had started and took it another giant step further. By including the phrase "across time and space," Venditti bought it all back together into one man. But at the same time, he went to give us a Hawkman with unlimited potential. In the first 12 issues, we discovered that there was a Hawkman on Krypton, Rann, in the Microverse, in New Genesis, and many others. 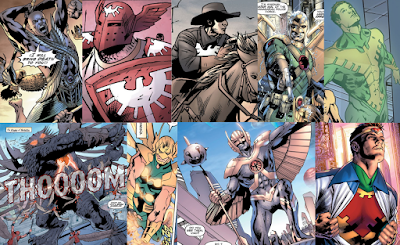 Venditti also gave us a reason why Hawkman does what he does. Ktar was created as a mindless, obedient, savage slave of an evil entity, but he was able to break free from the evil, and with the help of a red-haired woman, died trying to stop its genocidal rampage across the universe. He was given a chance to reincarnate through the years, across time and space, to fight for life, to be a savior, and to be a hero. That's an awesome, soaring origin for the character of Hawkman.

Note: After I posted this idea for the first time, Robert Venditti told me that this was exactly the way he pitched his idea for Hawkman to DC Comics. He said he "used the phrase “reverse Lucifer” when I pitched the idea to (DC Comics editors) Marie (Javins) and Andrew (Marino)."