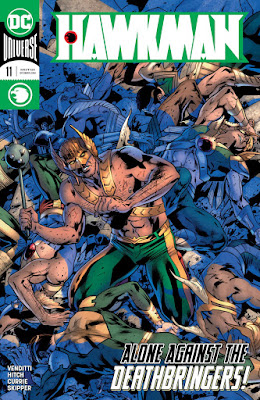 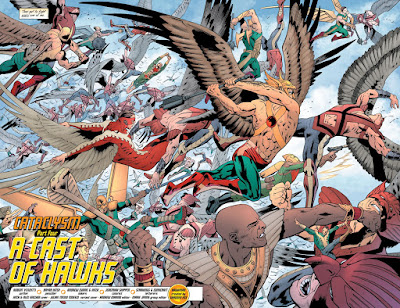 Hawkman No. 11 was such a comic book. It made us smile. It made us laugh. It made us gasp in surprise. It lifted us up. It dashed our hopes. It left us wanting more, anxious for the issue to see what happens to our hero. Since June of last year, writer Robert Venditti, artist Bryan Hitch and the rest of the team have taken us on an amazing adventure. We watched Hawkman fight winged gorillas, dinosaurs, Feitherans, versions of himself, a living planet, and finally the greatest enemy he may ever face. We saw him meet old friends, discover his past, remember his purpose and realize who he is. We saw him turn away from his creation as a Deathbringer, and become a "Lifebringer." We are watching him become a hero once again.
Venditti and Hitch have taken an 80-year old character who has been written, rewritten, and rewritten again, and have done what many amazing writers and artists set out to do in the past, but maybe did not quite reach the intended goal. They have reinvented Hawkman in a way that resonates with the reader and leaves us wanting to know more. They have brought us a Hawkman that most Hawkfans recognize but are rediscovering all over again, and also a Hawkman that new fans will want to know more about.
I heard Venditti mention in interviews that he really didn't know much about Hawkman before he was asked to do it. He started reading the past issues and saw the potential of Hawkman. He immediately understood what Hawkman is about and has set out to write a story that is true to his past but gives him a new direction. We will see how this origin story ends next month. But the story of Hawkman will continue on. There is so much more to discover; new and old. 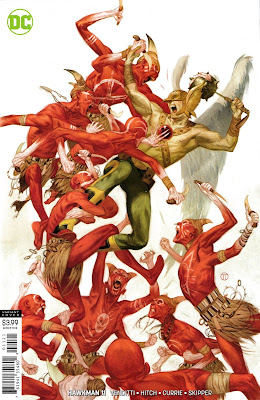 This is the penultimate issue for Hitch in this series. The art just keeps better and better. Maybe the fact that Hitch knew he would leave after No. 12 has given him the freedom to go all out, doing something that amazes the readers every issue. While it saddens me that the next issue will be his last, I can't wait to see how big of a bang Hitch is going to go out with. The work Hitch has done in this series will be talked about and remembered for many years to come. Joe Kubert, Murphy Anderson, Richard Howell, and a few others put their name on the character called Hawkman and Hitch has done the same. For now on, it will be impossible to talk about Hawkman artists without including Hitch in the discussion.
The story starts with Hawkman and his army of Hawkmen attacking the Deathbringer horde. All of the Hawkmen have their own special ability and powers and it was pure joy to see them in action. There were some familiar faces, and there were some new ones and some surprises that made many readers jaws drop. But then the tide turns and we are left at the end with seemingly no hope. To be honest, I am a bit worried. After all, Hawkman is a character who has died time and time again. There is no guarantee that Venditti is going to let our hero overcome all odds in this one. There may be another Hawkman death in the next issue. There may be many. Remember, in issue No. 1 Xanadu said, "You will die a hundred more deaths before you know the answer." Be prepared for an unorthodox ending to this first story arc.

I've tried to not give any spoilers in this review. I urge everyone to go check out the comic for themselves. Better yet, find a way to start reading from issue No. 1 and treat yourself to an amazing adventure. Cast aside preconceived ideas about Hawkman being confusing. Discover a familiar character for the first time and enjoy the flight.