Board Review of Hawkman No. 18: "Tyrant Reborn: Dual"

As DC Comics continues it's Year of the Villain theme, Hawkman's story of exploration and discovery could have been badly interrupted or thrown off course, but writer Robert Venditti seems to have done a masterful job of tying the infected Hawkman story into Hawkman's past. After seeing the Sky Tyrant finally take over at the end of the last issue, issue No. 18 starts off with the character's death on Earth-3. We all know some of the characters from Earth-3, a place where good and evil are reversed. In the past, we've seen Ultraman, Superwoman, Owlman, Power Ring, and Johnny Quick. For the first time, we are introduced to the Hawkman of that world, Sky Tyrant. There are spoilers ahead so if you haven't read the comic yet, don't read any further!

The issue starts off with Sky Tyrant getting attacked by the heroes of Earth-3. There are Shadow Sheriff (Shadow Thief), the Pinkerton Ghost (the Gentleman Ghost), Lion-Miss (Lion-Mane), and Matter Mage (Matter Master). Apparently, Sky Tyrant finally crossed some line and they come at him in a well-coordinated attack. It appears that they want to capture him at first, but they quickly realize that it isn't possible. Shadow Sheriff finally strikes the final blow, but Sky Tyrant promises his return before he dies. And then he's suddenly standing over Midway City of the current Earth.
This is all connected to something the Batman Who Laughs has done to cause Sky Tyrant to be reborn, but it's not touched on in this issue. Frankly, it doesn't really matter. We saw how Carter had been bothered by his nightmares for a while now, and we finally see the reason for the nightmares come up to the surface.
Carter Hall is now part of Sky Tyrant's consciousness and we find out that it had been the other way around. Sky Tyrant was part of Carter's memories and the cause of the nightmares he had been having. Sky Tyrant takes off to start a killing spree but Carter is able to prevent him from killing anyone at first.

It was interesting to see that the ghostly conscious form is Carter Hall and not Hawkman. Carter is dressed in his grungy clothes and Indiana Jones shoulder bag as he interacts with Sky Tyrant. Perhaps this was a way of Venditti showing us that the man comes before the hero and not the other way around.

Sky Tyrant is naturally aware of the deal Ktar Deathbringer made with the good entity back in issue No. 7. So instead of saving lives, he starts looking for people to kill to extend his reincarnation cycle. Only Carter is there to stop him.
During this fight, there are several people who recognize him right off. Hawkman's reputation with the general public has not really been touched on too often in the past, but Venditti has done this several times now and it's great to see. He is as recognized as Superman and the other superheroes. I find that a great part of the new series.
Carter slowly becomes weaker and realizes that he will soon be shoved into the back of Sky Tyrant's memory, helpless to stop his killing. Sky Tyrant approaches a crowd to start killing when it happens. The moment we've been waiting for since the series started. You'll have to buy the comic to see for yourself but it's well worth it.

The next issue is set up to be a very exciting one, a moment that Hawkfans have been waiting for a long time. There's no telling how Venditti is going to tell the story, but there's no doubt that a new chapter in Hawkman's life is about to begin. If he survives the Sky Tyrant, that is.
Venditti continues to bring us an entertaining superhero story with just enough action and dialogue to keep us discovering more about Hawkman and without it becoming weighed down with words. The art for this issue was a bit disappointing. There were some great panels as usual, but some seemed a bit sloppy, blurry, and rushed. I like Pat Olliffe's style, but some panels make you stop and wonder what happened. I do have to say that I really like the way Olliffe draws the Gentleman Ghost (the Pinkerton Ghost in this case). I look forward to a Gentleman Ghost story in the future.
Hawkfans need to support and promote this series if we want to see it continue. Despite the great story-telling by Venditti, sales numbers have been slowly declining. We need to get the numbers back up. Tweet about it, talk about it, buy an extra copy for someone, talk it up at your comic book store, write a review for it, and anything else you can think of to keep this book going.
As stated earlier, Venditti has done a great job of not letting another DC crossover storyline interfere too much with the Hawkman he is recreating. No mention was made of the Batman Who Laughs, and the book is better for it. We have a super-exciting issue coming out on December 11th. It's a moment many fans have waited for a long time so don't miss it! 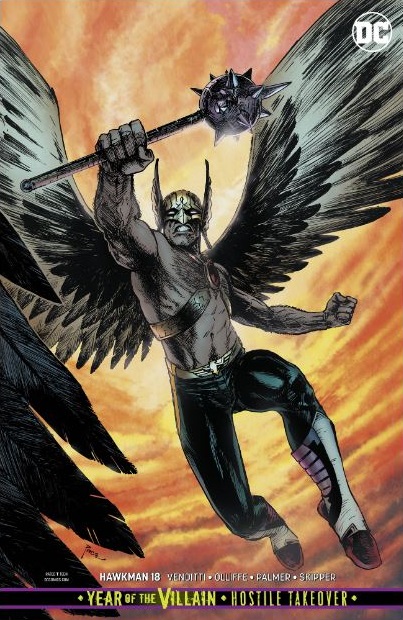