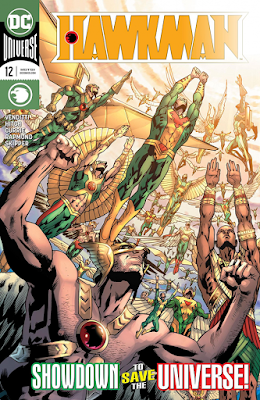 When we set out on a journey of exploration and discovery with Hawkman twelve months ago, we wondered how the hero we know as Carter Hall would be changed. How will his story be written this time? What kind of hero will writer Robert Venditti and artist Bryan Hitch bring us? The answer turns out to be everything and nothing, both at the same time. The core of Hawkman remains unchanged. He is the superhero of flight. He is the superhero of the sky. He carries a mace. He is from Egypt. He is from Thanagar. Shiera is the love of his life. He is an archaeologist. He remains the hero we’ve always known.


And yet, Venditti and Hitch dug deeper into the mythos of Hawkman. They gave us the reason why Hawkman is who he is, why he does what he does, and why he is one of the most original and iconic characters in comics. They also flew out into the vast potential of Hawkman. They took us on an adventure to places we had never been to before. They introduced us to characters we had never seen or heard of. They gave Hawkman new abilities, new friends, and a new reason that explained why he is who he is and does what he does. The writers and artists of the past 80 years started the journey and extended it. But Venditti and Hitch have widened and expanded the legend of Hawkman in ways we never imagined.

Issue eleven ended with the countdown to annihilation beginning, with Hawkman and his army looking on in terror. And thank the seven gods for that countdown! At the beginning of issue twelve, this gave the Hawk army a chance to counter-attack. It was thrilling to see Carter Hall take on his nemesis Idamm, while Catar-Ol, Katar Hol, the Dragon of Barbatos, Red Harrier, and the rest of the gang take on the Deathbringers and their Gundam robots.
It is a thrilling battle, showcasing many of Carter Hall’s abilities and how vicious he can be when in battle. “Forgive me for wanting to hammer the point home.” There’s a surprise appearance towards the end and a welcome mention of someone who many Hawkfans hope for a return in the near future. While the Justice League is locked away in Lois Lane Penitentiary and the Green Lantern Corps are off doing something I imagine they decided was more important, it was very refreshing and impressive that Hawkman had the history and the ability to overcome this threat on his own.
Bryan Hitch wraps up his Hawkman run with this issue. In Hawkman Found and the first twelve issues of this series, Hitch gave us some of the most massive, complex, beautiful Hawkman books ever. He gave us visions of Egypt, Thanagar, Krypton, the Microverse, and so many other locations throughout the series. One of the greatest assets of a character like Hawkman is his image, and Hitch gave us everything he has to bring us some of the most impressive drawings of Hawkman. There were so many double spreads and pages with multitudes of Hawkmen flying everywhere, and every page dumbfounded us with the sheer magnitude of it all. It’s disappointing to see him head off to other projects, but with Will Conrad doing the stand-alone No. 13 and then Pat Olliffe taking on the Year of the Villain storyline, Hawkman is in good hands.
Venditti’s opening story comes to a close with Hawkman having a greater grasp of his history, knowledge, and powers, and he is once again the general of the former Deathbringers.  Every good story leaves us with questions, allowing us to imagine what will happen next, and Venditti does a good job with that here. It will be interesting to see what happens with his army, Shiera, his situation on Earth, and the next crisis up ahead.
When reading a Hawkman story, I never thought that I liked one Hawkman more than another. No matter which Hawkman I was reading, it was Hawkman. To me, they were all the same character that I loved to read about in the comics. This story approached the story of Hawkman in the way I always have; they all have the same origin and they are all connected. Venditti has broadened the story of Hawkman in ways we never thought possible. He is a hero of exploration and discovery. He is a hero of time and space. He is the living historical document of the universe. He is Hawkman.