Hawkman Unleashed: Board Review of Hawkman Vol. V No. 3

Hawkman No. 3 by Robert Venditti hit the spin racks on August 8th, and for some reason, this issue felt different from the first two issues. I couldn’t put my finger on it for a while. I read it again and again, looking for the reason. And I think I figured it out. This may be a purely personal take on this version of Hawkman that Venditti has come up with. Caution: this review will be bursting with spoilers so if you haven’t read the issue yet, please go read it and then check out my review when you come across it again. 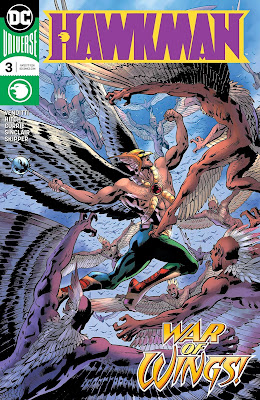 In the new issue of Hawkman, we had an almost embarrassment of riches for a comic book fan. Hawkman fighting a T-Rex. Hawkman sitting down at a camp fire roasting a kill as he wrote in his journal. Hawkman fighting an army of Feitherans. Hawkman’s mace doing something we had never seen before. Hawkman being transported through time and space to Thanagar. Katar Hol calling Carter Hall “Meat.” Thundering Thanagarian Snare Beasts! Are we allowed to have so much fun in one issue? This is nothing if not Hawkman Unleashed. 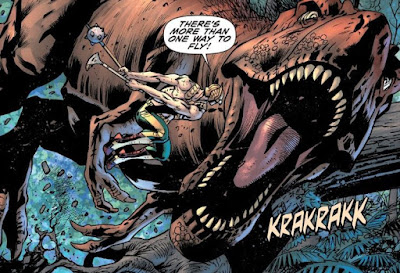 Until now, it seemed that Hawkman has been bound by his own history. “He’s a hero who reincarnates repeatedly.” “He has to have Hawkgirl by his side.” “He has to be savage.” “His wings should or shouldn’t be able to do that.” “If he did that, he would be too much like that other character.” “His continuity makes him so hard to follow.” And on and on it goes.
From my perspective, Robert Venditti has swept all those perceived restrictions aside and he has made the decision to write Hawkman as only Hawkman can be written, comparisons be damned. There is no retcon here. It all counts. We have a winged hero who digs underground for a profession; so let’s give him wings that go in and out when necessary. Hawkman’s primary weapon is his Nth metal mace; give the mace Mjolnir-like qualities to assist Hawkman when he’s fighting. There are many versions of Hawkman over the years; let’s include them in the story. And on and on it goes. The first two issues gave us an idea of what Venditti was going to do with this character, but this issue clinched it for me. Carter Hall. Check! Katar Hol. Check! Indiana Jones. Check! National Treasure. Check! Mjolnir Mace. Check! Dinosaurs. Check! Meat, Flash, Jam. Check! 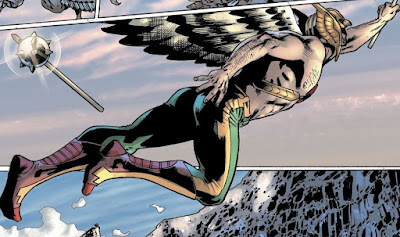 And the art! Slap me naked on a wrecking ball and call me Miley! It’s ridiculously good. Just page after page of incredible detail. I just imagine the inkers for Bryan Hitch chugging down some Pepto before they take a look to see what he has come up with. That splash page of Feitherans is just…stunning. The scene that Hitch came up with is insane. There are thirty-three Feitherans on that page! Andrew Currie and Paul Neary did the ink with Hitch. How many hours did this take them?! Alex Sinclair and Jeremiah Skipper did the colors. At first glance, I thought the Feitherans looked a bit drab, but their subtle colors made Hawkman really stand out in the center of it all. And that shot of Katar Hol on the last page. I almost broke my mouse when I clicked to go to the other page after seeing the word “Meat.” I probably would have ripped the page if I had been reading an actual book. Since Hawkman Found came out last year, I have said it was probably the most beautiful Hawkman comic I had ever seen, but I think this issue just took that title. 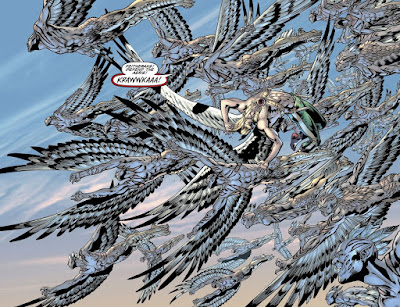 The story is moving awfully fast as well. We’re three issues in and we’ve already had Prince Khufu and Katar Hol (more next issue) and we’ve found out that there are a whole lot of other lives that we never knew about before. Venditti has given us a very likable Carter Hall. This isn’t a gruff brute who hits the first thing that moves. He is confident in his abilities but also has insecurities. “I wish I weren’t alone.” We’ve all thought that before. Was he pining for Shiera? Or maybe Ray Palmer? I’d like to think so.
Ladies and Gents, we are in for quite a ride with this new Hawkman. Venditti is going to let Hawkman fly in every sense of the word. So strap on those harnesses and get ready for a great adventure.