Hawkman in the Superman/Aquaman Adventure Hour

The month of September 1967 was a month to remember for Hawkman fans. During that month, Hawkman was featured in an animated cartoon for the first time. It happened during the Superman/Aquaman Adventure Hour, a Filmation animated series that ran for 36 episodes in 1967-68. During the hour, there were regular Superman and Aquaman features, along with a feature of rotating DC hero cartoons. Each were about six-minutes long and featured The Justice League, Green Lantern, Flash, The Atom, and of course Hawkman. Except for Superman, this was the first time ever for the heroes to appear in an animated series. During the series, Hawkman had three of his own features and he was also a part of the three Justice League of America cartoons. Let's take a look at the six episodes that started Hawkman's animated career back in the 1960s.

Justice League of America: "Between Two Armies"
Written by George Kashdan, September 9, 1967
This episode opens with one of the greatest shots in animated history in my humble opinion, as we see Hawkman, Green Lantern, and Superman flying together. It's been 51 years, but this one scene remains one of the greatest moments ever in television for a Hawkman-Green Lantern-Superman fan. 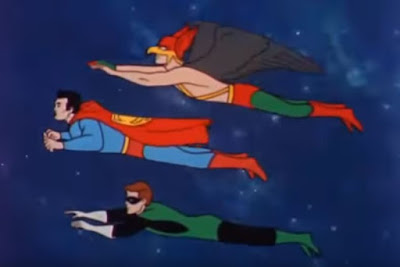 Hawkman Highlights:
Hawkman finds the source of the problem and contacts Flash and the Atom to intercept.
Hawkman uses the "lightning beams" from his claw to rip open a spaceship.
Hawkman gets in his spaceship, where his sidekick hawk Skreal is waiting, and intercepts the beam that could destroy the Earth.
Hawkman Quote: "Great Icarus!"

Hawkman Highlights:
Hawkman takes Val-Kar to his ship for protection.
After the fight is over, Hawkman takes him back to his homeworld.

Justice League of America: "Bad Day on Black Mountain"
Written by Dennis Marks, September 29, 1967
Hawkman Highlights:
Hawkman is introduced as "Interplanetary Space Scientist, Carter Hall".
Hawkman gets in his spaceship and intercepts a whole fleet of missiles heading for Earth.
Hawkman helps Green Lantern put out a fire that threatens Metropolis by firing missiles at the fire. (Interesting idea, but hey, it worked.)
Hawkman easily finds out with his ship's radar where Superman is being held.
Hawkman finds Superman trapped in a Kryptonite room with his radar vision. His radar vision also shows that the door is booby trapped.
Superman refers to Hawkman's ship as the "Hawkship." 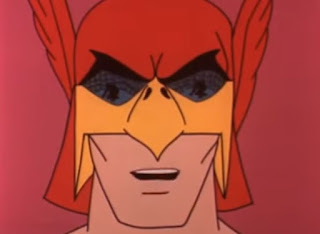 Note: He was in the Justice League intro, but where the heck is Aquaman? He is a no-show in all three episodes.

Intro dialogue: "Carter Hall, scientific genius from a far off world, flies into action as...Hawkman! The Winged Wonder, with Skreal, his faithful fighting mascot, uses his phenomenal powers against both earthly and interplanetary foes. Hawkman...The Winged Avenger!" (At least that is what was said to the best of my hearing.)

Hawkman Episode #3: "The Twenty-Third Dimension"
Written by Dennis Marks, September 29, 1967
The Hawkman in these six episodes is quite different from the Hawkman from the comics. Hawkman Vol. 1 by Gardner Fox was continuing during the time of the show, but the writers took quite a few liberties with the character.

Hawkgirl, where are you?
Hawkgirl never shows up in the series, and she is never mentioned. Instead we have a huge hawk named Skreal as Hawkman's sidekick. (Note: For the record, I have never thought of Hawkgirl as Hawkman's sidekick.) The bird is quite helpful in a few situations during the features. When Hawkman says, "Hop aboard!," the bird sits on Hawkman's head as they fly through the sky. Despite his limited appearances, the hawk has left a lasting impression on Hawkfans. Famous Hawkman cosplayer Andy Holt has Skreal sitting on his shoulder. It would probably cause quite a celebration if Hawkman writer Robert Venditti suddenly brought back the bird to the comics. 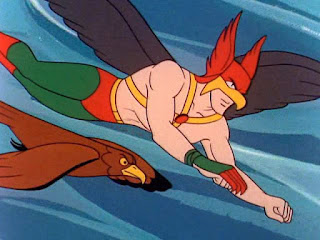 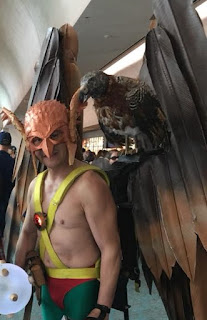 Set up:
In the series, Hawkman is Carter Hall, a scientist who works in a "vast lab complex outside Midway City,"where Hawkman hides his secret identity. He works with an older scientist named Professor Barnes.

Appearance:
In the series, he looks very similar to the Katar Hol character in the comics; he has black hair, and his costume is identical to the comic version except for a clawed glove he wears on his right hand. 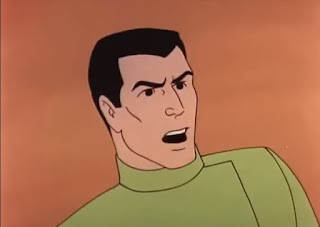 Powers/Abilities/Weapons:
Hawkman never uses ancient weapons in the series, but he has several weapons during the episodes:
1. Clawed gauntlet that has several abilities:
a. Shoots out "Repello Rays" which easily knocks out three space ships.
b. As his "Destructo Claw," it easily rips metal apart.
c. As his "Chemo Claw", it stops a machine shooting out a force barrier.
d. It is said to "possess awesome powers."
e. The gauntlet's beams easily carves through metal doors several times.
f. The "Chemo Claw" clogs the enemies' space ships's exhaust, causing them to explode.
2. Hawkman's wings
a. They are able to block laser beams from the enemies guns.
b. They protect Hawkman from explosions.
3. Spaceship: a powerful spaceship that orbits the Earth.
a. He turns his medallion on his chest and it opens the door.
b. The ship is extremely durable, as it blocks a beam that is destroying the Earth.
c. The ship has a powerful "Radiotron" which can locate people by finding their brainwaves and passing the info to Hawkman's helmet.
4. Hawkman's helmet:
a. Radar vision: sees through most anything
b. Magno Vision

Hawkman Quotes:
"Cool it, Skreal! This is no time for fun and games."
"Keep your claws crossed, Skreal!"
"Great Icarus!"
"Hang on, you kooky bird! We've got a job to do!"

Voice Actor: Vic Perrin is credited in two of the episodes but it appears that he did all of the Hawk episodes. So when you get that trivia question, "Who was the first voice actor for Hawkman," you'll know the answer! So what happened to the Superman/Aquaman Adventure Hour? According to Wikipedia, there were plans for segments for other heroes such as Plastic Man and Wonder Woman, but CBS acquired the rights to Batman so that was all scrapped to make way for Batman. A lot of other superheroes, including Hawkman, were shoved to the side for this and it would be several years later before Hawkman would appear on TV again.
The first appearance of Hawkman on TV was short-lived, but the episodes remain popular among Hawkfans to this day. Who knows? Maybe we'll see that awesome gauntlet and Skreal again someday.

Links to the episodes:
The Cartoon Scrapebook
Wikipedia
Internet Movie Database
DC Database
Posted by Tim Board at August 01, 2018