Video: Should Hawkman be Black?

Here are my thoughts on Hawkman being played by a Black actor.

Since the announcement of Aldis Hodge as Hawkman in the Black Adam movie, art and fan renditions of Hodge as Hawkman are starting to emerge. Fans are excited about what Hodge will look like as Hawkman. I'll be adding pictures as they come out and eventually we'll be getting some actual pictures of Hodge in costume, hopefully by summer next year. Check back in to see what the movie-version of Hawkman will look like! 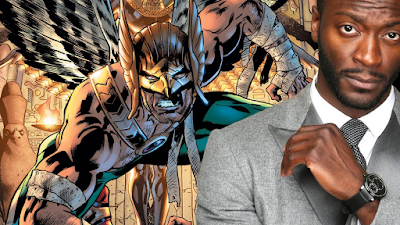 September 25, 2020 will go down as a day to remember in Hawkworld history as the first actor to play the live-action Hawkman for the silver screen was announced. After many months of rumors and speculations, Aldis Hodge was confirmed by numerous sources and finally the actor himself to be the Winged Wonder for the upcoming Black Adam movie.  The announcement came as a surprise to many fans and there was an immediate interest in the topic and Hawkman was even trending on Twitter for a while, something that this Hawkman fan has never seen before.
Read more »
Posted by Tim Board at September 26, 2020 No comments: