Win a Copy of Hawkman Awakening Signed by Robert Venditti!

Hawkman Day 2021 is coming soon! November 20 is the 82nd anniversary of Hawkman's first appearance in Flash Comics No. 1! The cover date is January 1940, but according to Grand Comics Database, the actual release date was November 20, 1939. So Hawkworld has always celebrated Hawkman's anniversary on this day.

This year, we have a special giveaway contest to celebrate! Here's your chance to get a copy of Hawkman Awakening (issues #1-6) of Robert Venditti and Bryan Hitch's Hawkman! And it will be signed by Venditti himself! One winner will be randomly chosen on November 20! To enter, just come over to Twitter and retweet the contest tweet and leave a comment! Hawkfans will be posting a bunch of things to celebrate Hawkman's birthday so come over and join! See you there! 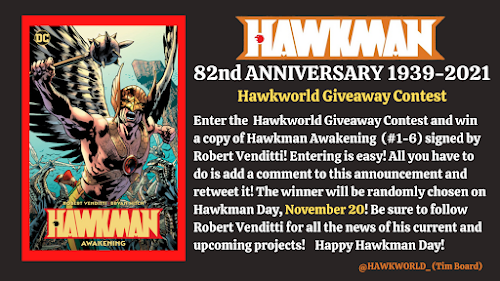