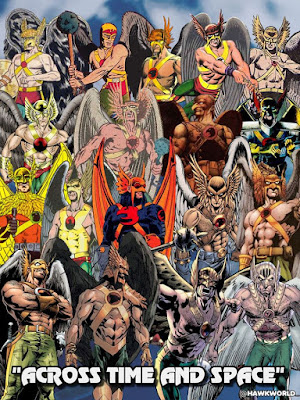 Share this with your comic book groups if you can!
If you've never read Hawkman comics, give it a try. Not the team or crossover comics. Too many writers use Hawkman as a plot device, and they fail to go into his character, which is actually pretty fascinating. In his own series, you will find a character who is committed to justice, saving lives, finding the truth, and punishing evil.
As Hawkman, he is the superhero of flight. His battleground is in the air. His weapon of choice is the mace, which means he is not there to fool around. Many writers depict him as a dumb brute, brawn before brains. But nothing could be further from the truth.
Through reincarnation, his knowledge of the universe is vast. He knows combat techniques Batman has never heard of. His knowledge of history and science is second to none.
He has connections to many other heroes and worlds. He has lived on Earth, Thanagar, Krypton, Rann, New Genesis, the Microverse, and many other places. He is best friends with the Atom, good friends with Adam Strange, the ancestor of Jonathan Kent, the father of Silver Scarab, the godfather of Northwind, and the grandfather of Daniel Hall, also known as the Dream of the Endless.
He is a leader. No one has served as the chairman of the Justice Society as long as he has. He has also been the police commissioner on Thanagar. His ability to pilot spacecraft is second to none. He has one of the most amazing ships in the universe, the Soarship.
As Dr. Carter Hall, he is a world-famous archaeologist and the curators of the Midway City Museum and/or the Stonechat Museum in St. Roch. He has a network of friends all over the world who help him as Carter Hall or as Hawkman. He is a historian, a scholar, a writer, a man who avoids conflict if he can, but if he sees injustice or is attacked, he will go into action. And when he does, he doesn't hold back. He finishes the fight.
The Love of his thousands of lifetimes is Shayera. Their bond is unbreakable. Shayera is the reason for who he is. She is his inspiration and his eternal love. Many writers have tried to split them up and put them with other characters, but it never ends well. These two were created together and belong together. The two characters are most inspiring and strongest when they are together.
In Hawkman comics, you'll see many villains who have fought Hawkman over the years. Gentleman Ghost, Shadow Thief, Hath-Set, Byth, and Lion-Mane are just a few of the many villains in Hawkman's history.
So ignore those who wrote him off as confusing or convoluted. Forget the warped, unimaginative versions that we've seen in crossover events or on TV. The writers' goal was not to introduce an awesome hero to us, but only to use him as plot fodder before they kill him off. They missed an opportunity because they didn't understand the character.
Hawkman is one of the deepest characters in comics, and they have only begun to explore the character. His potential is unlimited. Go check out the stories by Gardner Fox, Tony Isabella, John Ostrander, Benjamin Raab, and Robert Venditti. Discover an amazing character whose time might be just around the corner.
http://hawkworld.org
Posted by Tim Board at May 18, 2021