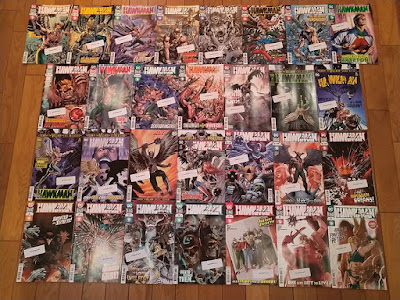 A few months ago, when we were coming out of the shutdown from the Coronavirus and comics were starting up again, I had some trouble getting my comics in Japan. Hawkman No. 25 was especially hard to get and I was still having trouble finding a copy six months after its release. I put out a word on Twitter to see if anyone could help me find a copy. But then I received a couple of tweets from Robert Venditti, the writer of the Hawkman Vol. V series.

I swooned after the first tweet and then my head literally exploded after the second tweet. On December 12, I received a box from the States. Venditti sent me the entire Hawkman run of 29 issues. Every copy had been signed. There was also a note saying that these were the copies he used as reference copies when he was writing the series. DAYUM! I am completely floored and amazed by Venditti's generosity.
Venditti followed me back on Twitter back in 2018, right after the Hawkman series was announced. Since then, I've had the great honor of talking about the series with him and even had the privilege of being on a couple podcasts together and even a zoom interview (coming out soon). Rob's interaction with the fans on SNS is absolutely amazing, always sharing his thoughts about the comics and appreciation for fan support. If you're aren't following Robert Venditti on Twitter and Instagram, you're missing out!
Posted by Tim Board at December 12, 2020