The DC Comics Solicitations for December 2020 have been released. Hawkman Vol. V is no more, but there are a few releases with Hawkman, Hawkwoman, and Hawkgirl. Link to Full Solicitations List 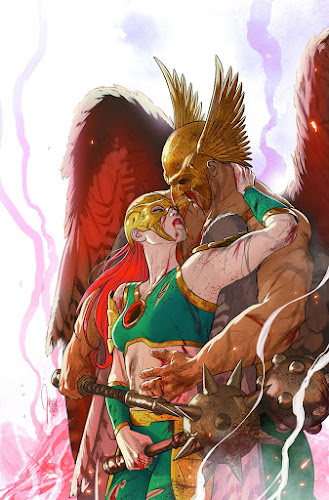 Hawkman Vol. 4: Hawks Eternal TP
ON SALE 2/9/21
An era of Hawkman reaches its fateful climax! To save himself, Hawkman must confront his darkest moments—but will it be enough to save himself and Hawkwoman from their first and greatest enemy? Thanks to the sinister manipulation of the Batman Who Laughs, Hawkman has become the villainous Sky Tyrant—and will have to revisit his past life as a plague doctor in the 17th century to fight off Sky Tyrant’s control over his body for good!
Then, Hawkman and Hawkwoman reunite, but the romantic moment is interrupted when they’re sucked into the realm of the Lord Beyond the Void! Hawkman is forced to confront the misery he wrought in his first life as Ktar Deathbringer—who seeks to end the winged hero’s resurrections permanently! Can Hawkman and Hawkwoman survive, and save the universe in the process? Collects Hawkman #20-29. 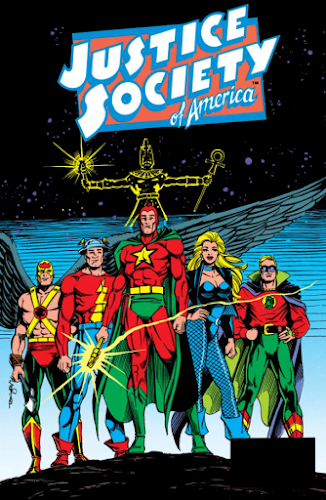 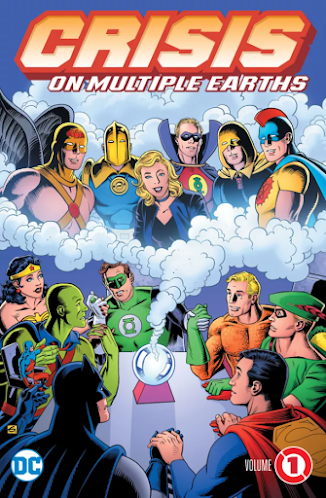 Crisis on Multiple Earths Book One: Crossing Over TP
ON SALE 2/2/21
From legendary comics writers Gardner Fox and Dennis O’Neil come the incredible crossover events between the Justice League of America and the Justice Society of America that launched the DC Multiverse as we know it! This collection brings together the earliest adventures of the heroes of two Earths as they battle their own arch-foes, the doppelgänger villains of Earth-Three known as the Crime Society, and more! Collects Justice League of America #21-22, #29-30, #37-38, #46-47, #55-56, #64-65, #73-74, #76, and #82-83. Dark Nights: Death Metal; The Secret Origin #1
ON SALE 12/1/20
The DCU’s darkest secrets are explored while two titans clash! The heroes search for a way to defeat the Darkest Knight through the universe’s past, while Superboy Prime faces down the demonic Batman! 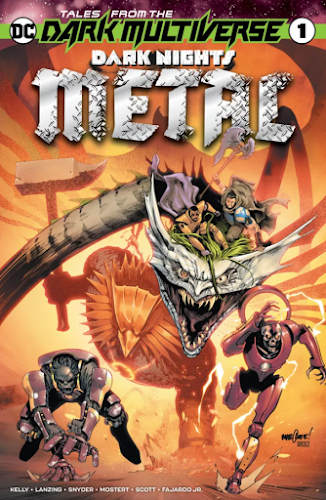 Tales from the Dark Multiverse: Dark Nights: Metal #1
ON SALE 12/29/20
In the event-defining epic Dark Nights: Metal, the Justice League defeated the vile Barbatos and his Dark Knights to save our universe from sinking into the abyss of the Dark Multiverse. But...what if they failed? What if Barbatos reigned victorious? Enter an alternate timeline where the DCU as you know it has been dragged down into the darkness. Witness the Justice League you once knew, hideously transformed into dragons who serve at the mercy of evil.
Duke Thomas, the Last Monitor, will have to seek out Nightwing and the few remaining survivors of the Metal event to assemble the Final Justice League in an attempt to save the Multiverse. Featuring a story by Metal architect Scott Snyder, rising stars Collin Kelly and Jackson Lanzing, and art by red-hot artist Karl Mostert, you won’t want to miss the biggest, loudest arena rock concert in the history of the DC Universe!

NOTE: The Dragon of Barbatos is featured on the cover behind the Joker Dragon. Is he in the story? That's anybody's guess. 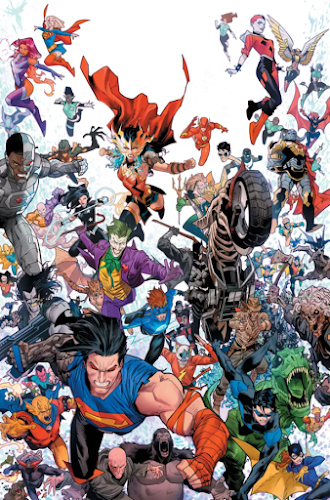 ON SALE 12/29/20
What would it take to get every being left in the Multiverse to side together in the ultimate, final showdown? Total decimation and the complete undoing of all existence? The Batman Who Laughs has made his final move, bringing the most horrifying opposition to the battleground, and now every hero and villain left alive will stand and fight together. This epic battle book details every side of the last war across the Multiverse—Wonder Woman leading the heroes, Superman leading the villains, and Batman leading the dead—everyone has to play their part. Everyone and everything is at stake…so join here for the last of the DCU as we know it!

Note: Hawkgirl (Kendra Saunders is on the cover but there's no guarantee she shows up in the book.
Link to Full December 2020 List
Posted by Tim Board at September 12, 2020