Just Like Old Times: Board Review of Hawkman No. 5

Hawkman No. 5 by Robert Venditti and Bryan Hitch was a comic book that made you remember how special a friendship can be. Over the last four months, Hawkfans have been enthralled by the adventures of Hawkman as he travels through ancient Greece, London, Egypt, Dinosaur Island, Thanagar, Indonesia and now the Microverse. In this issue, that all seemed to take a back seat to the friendship of Carter Hall and Ray Palmer. And we didn't mind at all.

Note: This review is full of spoilers so come back after you've read the book! 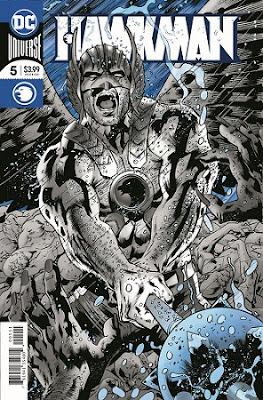 In Screen Rant's preview of the issue last week, we were treated to the reunion of Carter and Ray on the very first page. I'm sure their happy embrace and the look of utter joy on Carter's face brought a smile to many readers, whether you knew their history or not. How many were a bit taken aback by Carter's expression? I don't think I have ever seen him that happy. After so many time travels, battles and unanswered questions, Carter is tired, confused and worried about what is happening. That embrace seems to tell us how happy he is to see his friend after so many years, but also an extreme relief to be able to be with someone he loves and who he knows will give him the support he needs right now. How many of us were reminded of a good friend that gives us that kind of joy? 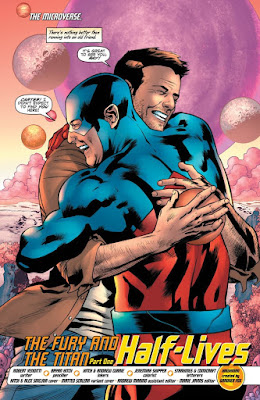 Throughout the issue, the friendship that these two heroes share was very clear to see. Both know the abilities and character of the other, maybe better than anyone, and it truly felt like two brothers talking. This issue had a lot of dialogue, but it was necessary after so many questions being raised in the first four issues, Ray's presence seemed like a sanctuary for Carter. He could catch his breath, find some answers and find out where he needed to go next. 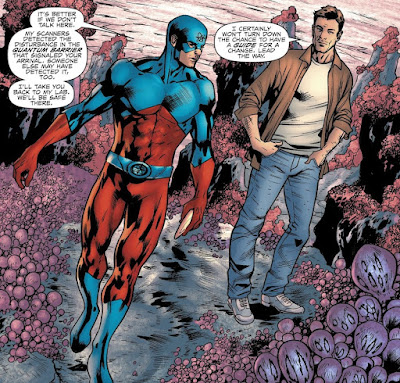 Carter and Ray reminisce a bit as they remember their time chasing "crooks and bank robbers" and how far they have come from that. Carter tells Ray about his reincarnations across time and space, which Ray seems to enjoy quite a bit, calling it his "love language." The fact that Carter was sent to the Microverse was because he once had a life here, but he didn't go back in time to meet that version of himself like in Egypt or Thanagar. Ray deduces that Carter left behind the disc, not to send him back in time, but to lead him back to get something that he left hidden there, maybe a weapon to defeat the Deathbringers. 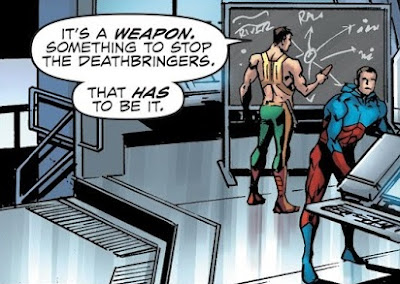 Ray also gives us two theories of time, the River Theory and the Ocean Theory. The River Theory is the basic idea of time flowing straight in a forward motion, sometimes bumping up against the bank as it goes. Then there's the Ocean Theory. Ray explains that each life that Carter has lived is floating on the surface, all at the same time. Until now, we thought that Carter lives a life, dies and then is reborn somewhere else on Earth. But now we see that he was not only reincarnating chronologically on Earth but also out of chronological order on other planets. Professor Bill of the Comic Book University had an interesting theory about this.

The theory is that the Carter Hall on Earth is the Hawkman Prime, or Hawkman Proper. When Ray is explaining the Ocean Theory, he draws Carter in the center and illustrates his other lives being offshoots of himself, but he always returns to Earth to live another life there. All of these lifetimes are there floating on the surface at the same time, with Carter in the center. So this would explain how there could be two Hawkmen concurrently, maybe more. It's confusing, yes, but even Hawkman doesn't understand it yet. I'm sure we will get more answers as we go along. But what Venditti has done is absolutely genius. I was always stuck in the River Theory, as you can see in my FLOWchart (on the right), but Venditti shows us how we were thinking too small. And I have a feeling he's just getting started in reinventing the story of Hawkman.
Ray discovers that Hawkman has hidden something beneath the surface of a planet called Moz-ga, a sentient planet with the spirit of a dead wizard. Whoa. Whoa. Whoa. Back up. In the middle of the Microverse. A sentient planet. With the spirit of a dead wizard. Who has a nasty disposition. That's where Hawkman buried something. Everything about that is as nutty as a loon and it's fantastic! Ray calls it the most dangerous planet in the Microverse but if ya gotta go, ya gotta go. So our heroes arrive on the planet.

In the next scene, we get an idea of Hawkman's power. Ever since the Metal series, I've been wondering about the level of Hawkman's power. He was the Dragon of Barbatos, who was pretty darn powerful, for a pretty long time. Even though he returned to his former self, did he retain any of those Dragon powers? If so, then how much? At what level? In issue No. 1, we saw him defeat a giant Wingor with one blow. In issue No. 3, we saw him send a T-Rex scampering off into the woods with one blow. Ray wants Carter to hold off, but he's in no mood to back down with the Nth metal object so near, so he hauls off and pretty much destroys the Ents and the surrounding area with one planet-shattering blow. "Moz-ga wants to get seismic?! I can do seismic!" But that just gets Moz-ga angry.
It was mentioned earlier that these two know each other's abilities, probably better than anyone else. But a lot has happened since they last met. When Carter first showed up, Atom was getting ready to walk back to his lab since Carter wasn't in his Hawkman gear, but then Carter turned the medallion on his chest and they flew over to Ray's lab. I'm thinking that was a surprise for Ray. He had a surprise of his own as well. In the Microverse, Ray can grow giant-size. which was a welcome surprise for Carter. And the issue ends with the two going into the battle against Moz-ga. 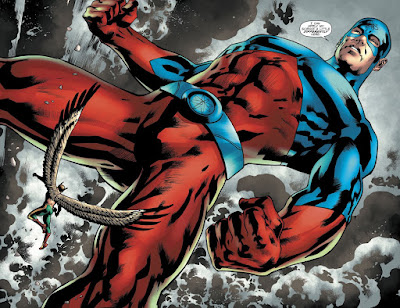 I cannot express the joy it brings to read a Hawkman comic that is written by someone who knows the character. Venditti must have spent hours and hours pouring over the past stories of Hawkman to understand the character before he started writing him. He has found a way to elevate the character without making any major changes to the past. He somehow has found a way to catch the interest of new readers without alienating long-time fans. There is no other way to say it. He has done a masterful job in tackling what many call one of the most difficult characters to write. The same goes for the art. Venditti's writing is great, but it really comes alive with Bryan Hitch's art. The detail and effort that Hitch puts into each panel are stunning. You can't put that much detail into the wings, expressions, and scenery unless you really want the fans to understand and enjoy the character. Can we just hand the Eisner Awards to these two masters now?
Hitch (pencils and ink) and Jeremiah Skipper (colors) gave us one of the most memorable Hawkman two-page spreads in Hawk history. It's absolutely beautiful, and I'll admit I choked up a bit when I saw it for the first time. Definitely frame-worthy. 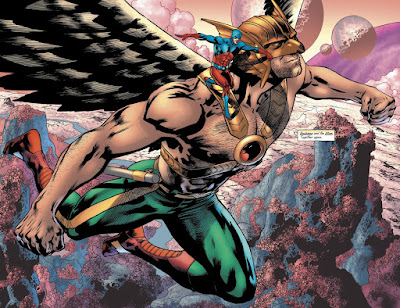 The issue was a big leap forward in the current story, but this issue's most lasting impression was the friendship of two heroes. With all the fighting going on between heroes in the comics and movies lately, it was a breath of fresh air to see Hawkman and Carter as we remembered them to be; two heroes who love each other as brothers, and who will always continue their friendship no matter how many years have passed. May we all have a friendship like that.

Issue No. 6 is due to released on November 14th!