Exploring and Discovering Hawkman: Board Review of Hawkman No. 4

The Hawkman series by Robert Venditti and Bryan Hitch is an absolute joyride. From issue one, they have taken the 79-year-old superhero and given the veteran Hawkfans what they have been asking for for a very long time, and at the same time they have managed to craft a story and art that has comic book fans not familiar with the hero surprised and loving what they have discovered. Ever since the news got out that Carter Hall would be running into Katar Hol in the skies over Thanagar, fans have been eagerly anticipating the meeting and we were not disappointed. Let's get right into a spoiler-rich review of Hawkman No. 1 (released September 12). If you haven't read the comic yet, do yourself a favor and go enjoy the comic first. 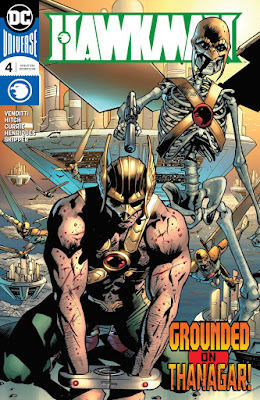 THE STORY
We find The dreaded Deathbringers on the move, showing up at a planet that idolizes an ancient hero called Gold Hawk, much in the same way that Thanagar reveres Kalmoran. The people are expecting their hero, but then they are completely wiped out in an instant by the three giants. The planet is only referred to as "a faraway world" and it seems that this scene is repeating itself as the hawk beings go through the universe, looking for the "Great Betrayer." I'm assuming it is Carter Hall that they are looking for. The statue of the Gold Hawk and Kalmoran are almost identical in the pose, so could it be Kalmoran that they are looking for? I'm also thinking that Kalmoran is one of Hawkman's past lives. We'll get our answers to those questions one at a time as the Deathbringers get closer and closer to Earth.

Carter Hall finds himself transported to Thanagar and when he sprouts wings from his back to fly, Katar Hol immediately assumes that it is their old adversary, the shape-shifter Byth. Venditti uses that great Thanagar lingo like "Meat," "Seven Hells," and "Lipped" as Katar chases Carter through the Downside. Speaking of the Downside, it looks like a scene straight out of Blade Runner. It's a stroke of Hitch's genius to mix the vision of Tim Truman's down trodden world with the dystopian Los Angeles in Ridley's Scott's film. It's very amusing and satisfying to watch Venditti and Hitch fit the idea of Indiana Jones on Carter Hall and now we see Blade Runner being a perfect fit for Thanagar. Now all we need is Hawkman flying the Millennium Falcon and then wait for the movie studios to figure out what a gold mine of a hero they are missing out on.

Carter finally convinces his former self that he is not Byth and Katar is amazed at how Carter can control his wings at will. The doorjamb comment was just another example of what makes this comic fun. The two Hawks are trading notes on the shoulder of Kalmoran when lo and behold, Shayera Thal shows up, demanding who attacked her partner. We have not seen Shayera since she was killed in the Rann-Thanagar War in 2005 so it was pure joy to see her. Carter calls her Shiera, which was interesting. Carter and Shayera have met before, back in Hawkman Vol. 4 No. 15-17 and then in the Rann-Thanagar War, so maybe he was remembering his own partner when he saw Shayera. Katar suddenly kicks Carter off the statue, probably to keep his more hot-headed partner from shooting Carter down. Carter realizes he was kicked in the direction of what he is looking for. He quickly finds it and time-zips back to his own time and place. 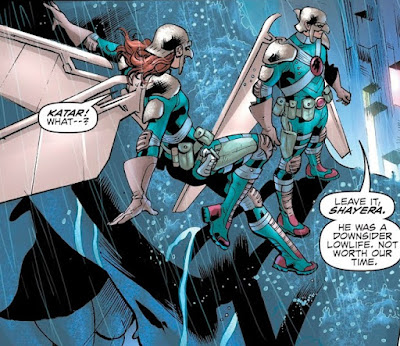 We then see Carter at the home of an Indonesian couple. They are another of Carter's amazing network of friends who will help him whenever he needs it. This parade of characters who show up in the issues is great fun and we continue to see how Carter has influenced so many lives over time. Who is Hawkman the hero? Look at these people and we find the answer.
Carter starts messing around with the disc he found on the Kalmoran statue back on Thanagar and he remembers Madame Xanadu's words to add blood to find the answer. As soon as he does that, he is time/space/dimension-zapped straight to the Microverse and none other than his old buddy, Ray Palmer aka The Atom. 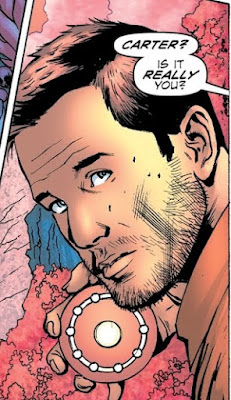 THE ART
Hitch continues to do some of his best work I've ever seen him do. As mentioned earlier, the Blade Runner look was fantastic and really worked well for Thanagar. It may not have seemed as grimy and hopeless as Truman's version in Hawkworld, but it fit perfectly. Hitch lets us fly up with the Hawks to give us a two-page spread of the glory of Thanagar's floating cities. I sure hope we get to see Thanagar again because I want to see more of this planet drawn by Hitch. The only odd part was one picture of Shayera looking overly masculine, complete with an odd bulge in a certain area. Nevertheless, another absolutely beautiful comic by Hitch, Andrew Currie (ink), Andy Owens (ink), Daniel Henriques (ink), Jeremiah Skipper (color), Richard Starkings (letters), and Comicraft (letters). The cover by Bryan Hitch and Alex Sinclair is a bit of a mystery with the skeletal Katar Hol but still a great attention-grabber. Dale Keown had a tough job following up on the awesome variants that Stjepan Sejic did on the first three issues but it's a good one. Really liked that mace.

WHAT'S AHEAD
The theme of this series is exploration and discovery. Venditti is giving us an adventure to share with Hawkman as we see him slowly unravel the mystery of the Deathbringers and his own past. In issue five, I'm guessing that Ray Palmer has some information for Hawkman that will really turn things on its head. This will be the final part of the first story arc so expect something big to happen next month. Looking way, way ahead, I think Venditti is establishing once and for all who Carter Hall truly is, and once that's settled (no easy task), we're going to see more of Hawkman going up against his Rogues Gallery, such as Gentleman Ghost, Shadow Thief and Lion Mane, as well as interact more with the Justice League and maybe even get the Justice society back together. There are so many great stories and characters in Hawk history to explore and it's going to be a hoot (or should I say wheet) following our favorite winged hero.

FREE FLYING
There have been many Hawkman series over the years, but as a long time fan, it feels like Hawkman has finally been given the character, the abilities, the supporting cast and the art to reach his full potential. Venditti and Hitch have gone above and beyond many expectations for the comic, and I cannot wait for the flight ahead. Wings out! 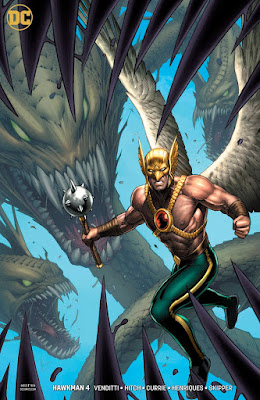