Board Review of Hawkman Vol. V No. 2

As I sat down to read Hawkman No. 2, I found myself feeling the same way I do when I sit down to watch a movie that I know, from all the word of mouth and previews, is going to be good. We are only two issues into Robert Venditti’s Hawkman series, but this is what many Hawkman fans have been wanting for a very long time. Geoff John’s run in Hawkman Vol. 4 (2002-2004) is often called the best version of Hawkman since the Gardner Fox-Joe Kubert days, but in my opinion this series is already on its way to surpassing it. The writing by Venditti and the art of Bryan Hitch has brought Carter Hall/Hawkman to where Hawkfans have always wanted him. The Indiana Jones comparisons have been made often over the years but it’s about time someone finally fully embraced that connection instead of trying to avoid it. Here are my thoughts on the issue and it is a completely spoiler rich review, so feel free to come back after you’ve read the issue.


The Character of Carter Hall
This version of Carter Hall is coming across as a very likable character. He seems well respected, being called Dr. Hall by the curator of the British Museum. He also has free access to the museum any time he wants. He seems to have a friend network that spreads all over the world, as we saw with Y’annis Stavropolous in Greece and Gertie in London. He’s a guy who likes to travel light, without much fuss; such as sleeping on Y’annis’ floor and Gertie’s couch. He’s not without his pride, as he was insulted when Simon the curator thought he was wanting financial help. The second issue seemed a bit heavy on dialogue, but every line seems to reveal more about him and his current situation. You must read it a few times to make sure you didn’t miss anything.
Chay-ara
Since she was not seen in the first issue, it was a very welcome sight to see Chay-ara on the first page. Until now, there has rarely been a Hawkman story without Hawkgirl, but Venditti isn’t going to show us just yet what role she will play in the story, so we are left to speculate. Shayera Thal didn’t appear in The Savage Hawkman series until issue No. 12, and she didn’t last long either. Hard to say when Hawkgirl will make an appearance. But Carter Hall is thinking that she was reincarnated across time and space just as he did, so it’s clear that he is wondering about her and looking for her as well. We saw Carter with Kendra in the first issue of Justice League, so it seems they are in touch with each other. This leads me to believe that the Hawkgirl he is looking for is not Kendra but either Shiera or Shayera. I’ve never been successful in trying to guess what Venditti has up his sleeve though, so stay tuned.
So far we know that something cataclysmic is coming and only Carter Hall can stop it. Somehow all of his past lives are connected to it. To find out what is coming, he sets off to discover more about his past. In this issue, Carter Hall realizes that he had the wrong idea about many things, including the hawk glyphs of the Egyptian exhibit. He finds another piece of the puzzle with help from Prince Khufu and heads off to Dinosaur Island. The readers don't know exactly what Carter is after. Neither does Carter himself. Venditti is masterful at not giving away the whole bucket of chicken right from the get go. He gives us a wing there, a drumstick here, keeping our interest but not revealing too much. When the big reveal comes, we’ll all remember back and tie all the pieces together.

Friend Network
Each issue introduces one of Carter’s friends. Each friend has an ancestor who had a connection with Carter Hall. Each friend is always willing to lend Carter a hand. I really hope this is a repeated story line in each issue, with a new character shedding some light on Carter Hall’s past. What do you think is next; a Japanese sushi chef whose ancestor was saved by Hawkman during the Bakumatsu era? This could be fun.

“Kalmoran”
Most Hawkfans will remember Kalmoran as the Thanagarian hero who was admired by the young Katar Hol in Hawkworld Vol. 1. Kalmoran was a slave when Thanagar was under Polaran rule. He led a revolt and defeated the Polaran empire. He became the ruler of Thanagar and worked to make a beautiful society for the Thanagarian people. He made an appearance or two in the early days of the Silver age (The Brave and the Bold No. 43), as well as the Hawkworld series (Hawkworld Vol. 1 No. 1). In this issue, just by uttering the name “Kalmoran,” Prince Khufu understood Carter and assisted him in finding what he was looking for. I don’t think we’ve heard the name for the last time.

Hawkman’s Gear
We got to see a little more of Hawkman’s costume in this issue. I was surprised to see the Hawk Nth Metal Medallion directly connected to Carter Hall’s chest. It reminded me of Iron Man’s chest piece. I’m also wondering if this is where Carter always keeps his medallion, and if so, how the heck does it stay on? Nth Metal Glue? Suction Cups? Chest hair? I’m guessing it’s another function of the Nth Metal. Last issue we saw Carter turn the medallion and when it clicked, he was instantly transformed into Hawkman. The fan reaction to this has been mixed but I personally love it. For a guy who travels with nothing but a satchel flung over his shoulder, getting into his costume might not be feasible when he really needs it. This is perfect for a guy who likes to travel light. And we don’t need bat poles or phone booths to change. The medallion seems to be controlled by the forces of the Nth Metal. Usually Carter changes into Hawkman himself, but this time the metal took over. Hawkman’s mace also seems to work exactly like a light saber. I’m wondering what else the rod can change into. Lots more surprises to come about Hawkman’s weapons, I think. 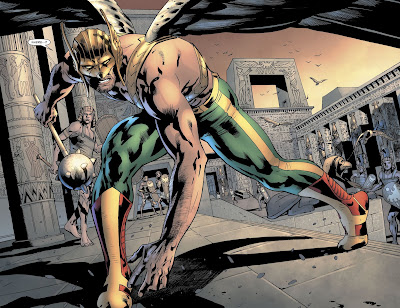 Hawkman’s Flight
Hawkman was the first superhero whose specialty was to fly. He has always been first and foremost about flying. Venditti has said that he wants Hawkman to be in aerial battles because that’s where he’s most experienced and comfortable. In the last two issues, we have seen him immediately get into the air to gain the advantage. Superman is punching, Batman is using gadgets, and Hawkman is flying. Every hero has his signature battle plan, and this is Hawkman’s. 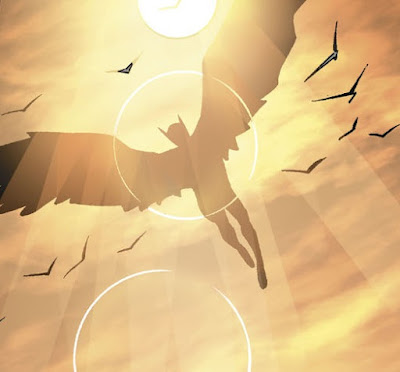 The Art
I’m now convinced that Bryan Hitch was born to draw Hawkman. With help on the inks from Andrew Currie and Daniel Henriques, the art for this issue is truly beautiful to look at. That Hawk on page one! The two-page spread of Hawkman and Prince Khufu going at it! The detail of Hitch’s work is just stunning. Jeremiah Skipper did the coloring and it was spot on as well. Hawkman’s costume really looked bright and colorful and the detail to the wings is amazing. It took me a while to get used to the style of the helmet and boots, but the look has grown on me. This is Hitch’s Hawkman and Hawkfans will soon be able to identify it immediately.
Every cover is worth a frame of its own. Hitch and Alex Sinclair’s cover reminded some fans of Jack Kirby’s style, and the variant cover by Stjepan Sejic is out of this world. Both are great additions to the Hawkman cover gallery. 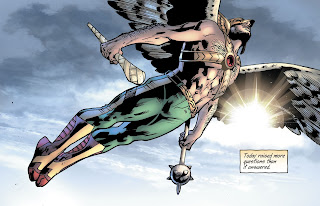 Summary
This series is fun! Hawkman has always been a character with so much potential and we have a writer is not afraid to do what he wants with the character. Everything about Hawkman has been put on the table; his origins, his background, his powers, his costume, Hawkgirl, etc. Venditti isn’t going to reveal everything all at once about Hawkman. It’s coming one piece at a time and it’s going to be a blast. The flight continues!