Geez. What can I say about the guy that I haven’t already said? I mean I wrote (most of ) the Hawkman Companion, an article for Back Issue magazine, and a Comic Love post for Comicosity on Hawkman and Hawkwoman (Hawkgirl). There can’t be that much more to say, can there?

I could rage about how Hawkman and Hawkwoman have been short-changed and neglected (the only characters that haven’t been celebrated with “A Celebration of 75 Years...” book, despite debuting in the same issue as the Flash, having more solo adventures than the Joker, and going toe-to-philosophical-toe with Green Arrow) or how their adventures seem to get undercut by events (the promise at the end of Brightest Day never materialized, but had super-strong emotional potential) but I don’t want to wallow. I want to celebrate.

I want to celebrate the love. Love for the characters, the creators, the fans.

I’ve got stories about the stories, from my initial conversation with Cliff Chiang about my ideas for the cover (trust me when I say Cliff was kind to listen) and hideous mis-hearing of an interview due to accents and exhaustion. I have tales of joy and misery about the results of the Companion, but again, I want to celebrate what is, what happened, and where it is now.

Two years ago Tim Board decided to project his appreciation for Hawkman in the form of the Hawkworld Facebook group. That group is now closing in on 5000 members. Let that sink in for a bit: almost 5000 people have individually chosen to share their appreciation for Hawkman, Hawkgirl, or Hawkwoman by asking (or accepting an invitation) to join a Facebook group. And that’s only the people who have joined.

I fail to recall my own entry to Hawkworld, save for the fact that once I found it, I was made to feel as welcome as possible from a wonderful group of fans and an infectiously enthusiastic founder. Tim’s passion for the Hawks is beyond compare – and I should know, since I wrote the book on it.

My own approach to Hawkman came from cartoons, but was solidified by comics, specifically The Shadow War of Hawkman. In those pages, I learned of love and loss, homeland and home. I was a teen when my buddy Mark and I would swap comics we bought at the local carryout. This not only gave us something to share and a reason to get together, but it maximized our individual (allowance) budgets. Mark gets these books, I get those. Read and swap. Mark’s taste always seemed to pick my interest more than mine picked Marks, save for the X-Men. I “found” the X-Men through an ad (another story, another location), but Mark found more commonality with the mutants than I did. The same can be said of Hawkman. Mark picked up the first issue of Shadow War.He liked it enough, he said, but he had no problem shuffling it my way rather quickly, and even less of a problem giving it up for a different comic (I think I may have given him an issue of Uncanny in exchange).

That issue opened my brain to what relationships could be within the superhero world. Sure there were relationships, but Hawkman and Hawkwoman were married. I may have know that before, but this issue showed what that meant, and how that shaped them as more than just people with wings. They did this all together – working at a museum, fighting crime, living, flying, and more. No matter what happened, they were there for one another. Until that last page. 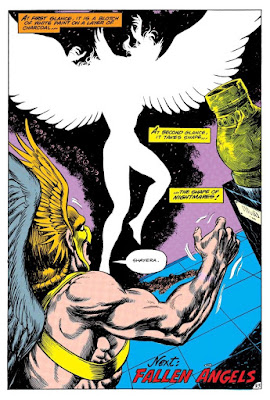 And that’s the heart of the Hawks’ relationship to me. It appears tragic at first, but it is through that tragedy that the love becomes evident. Hawkman’s world shatters at the apparent loss of Shayera. That loss defines him and his role forward. The healing of that loss (keeping it spoiler-free, haha!) adds depth to the relationship and the characters. And it made me realize that together is definitely better than alone.

Yes, my depth of appreciation would ebb and flow from this point through the series. Hawkworld made the relationship tragic, Geoff Johns made it elusive but eternal, Brightest Day filled it with hope. Once again, Hawkman and Hawkwoman would be able to celebrate one another, to share their love, and to mete out justice.

The love of these two characters is what drove me to finish the Hawkman Companion. Yes, Hawkman and his arsenal helped my pitch to TwoMorrows, but the relationship between the two characters fueled my personal investment.

That’s what I hope we see again soon: love. After all, Hawkman is cool, and so is Hawkgirl (she’ll always be Hawkwoman to me). They’re both capable and fun, individually. Together, however, they are unlike anything else in any fictional media: a husband and wife duo, bonded through centuries and lives, secure in knowing their fates never stray far from one another. That’s what love is all about, the confidence in your partner - a stream that’s neither give nor take, but both at the same time.

My wife helped me with the book. She scanned countless stacks of comics, took care of my kids’ activities, and smiled and nodded whenever I told her I had a chance to interview someone, acquire another piece of art, or simply needed to vent about what happened/didn’t happen/or I wanted to happen with the book. My confidence in her to be there to help was not unlike Katar’s trust in Shayera. Her faith in me to balance life, book, work, and family was equally measured.

Quite like the bond I shared with my buddy, Mark. We never had to take stock of what we had or didn’t have. We didn’t use a library system to share books, we just shared, knowing the other would be there to borrow from, to lend to, to share and to listen.

You can find Doug Zawisza on Facebook, and don't miss his articles on Comicosity!
Posted by Tim Board at January 15, 2018