Hawkman's Ultimate Weapon: The Claw of Horus
By Tim Board 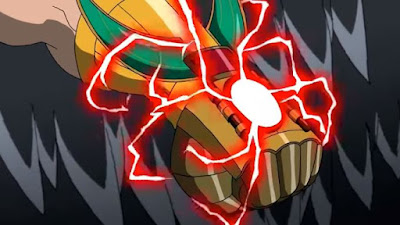 Throughout his history, one of Hawkman's trademarks has been his weapons, From the beginning he has used all sorts of weapons to defeat his enemies; from his ever present mace to his Katar from Hawkworld. However, in 2001, David Goyer and Geoff Johns created a weapon for Hawkman that would be his most powerful weapon ever; the Claw of Horus.

In JSA No. 20 (March 2001), the Flash (Jay Garrick) borrowed Black Adam's speed to pull the King of Fears into the Speed Force and destroy it. To return from the Speed Force, the Flash used Black Adam's energy signature as a guide or as Mister Terrific called it, a"tether". However, instead of returning to the Black Adam of the 21st century, he ended up 3,000 years in the past where he met Prince Khufu (the future Hawkman) and his advisers Nabu (Doctor Fate), and Teth-Adam (Black Adam).
Nabu had foreseen a battle on Thanagar that would take place in the Flash's time in the 21st century. To help them win the battle, Prince Khufu gave the Flash the Claw of Horus. This was a war gauntlet made from the Nth metal they found on a Thanagarian space ship that had crashed in the desert. Nabu instructed the Flash to give it to Khufu (Hawkman) when they met again in the future. Using the speed of Teth-Adam, the Flash was able to safely return to the 21st century with the Claw of Horus.
Soon afterwards, Hawkman was brought back from the Well of Spirits to help fight Onimar Synn, a Thanagarian demon who had taken over the planet and most of the Nth metal. The Justice Society came to Thanagar to help and the Flash gave the Claw of Horus to Hawkman as promised thousands of years before.
The first thing Hawkman did was to use the Claw to diasable Onimar Synn's wingmen's Nth metal, causing many of them to fall out of the sky. However they were eventually defeated and Synn took the Claw from Hawkman. He added the Claw to his body of Nth metal but that was his fatal mistake. Hawkman and Hawkgirl channeled their love for each other into the Claw and it caused Synn to self-destruct.
The next appearance of the Claw of Horus came in Superman/Batman No. 4 (January 2004). In this episode, Hawkman and Captain Marvel were asked to bring in the fugitives Superman and Batman.
Hawkman took on Batman while Captain Marvel went after Superman. During the battle, Batman told Superman to trade opponents. Batman took on Captain Marvel and Superman grabed Hawkman. He took Hawkman up high to make him blackout, but before that happened, the Claw of Horus came out of Hawkman's arm gear. He punched Superman out while explaining the Claw of Horus to him. "It draws its power from the magnetic core of the Earth. Essentially...I just hit you with the planet."

From Superman/Batman: Public Enemies (2009)
The next appearance of the Claw was in Hawkman Vol. 4 No. 42, and this time, Hawkgirl was the one to wear it. This is the only time we have seen her wear it, but she used it with great effect. In the story, Hawkman was supposedly dead (shocker), and a villain called the Purple Pilgrim came after Kendra Saunders (Hawkgirl) and her grandfather Speed Saunders (a cousin of Shiera Saunders, the Golden Age Hawkgirl). The Pilgrim was about to kill Speed when Hawkgirl put the Claw on and blasted him out of the building with a powerful energy blast.
The Pilgrim tried to kill Hawkgirl and take the Claw for himself but she blasted him again, creating a huge hole in the middle of the street several feet deep. She blasted him a third time, completely destroying the entire street in the process.
The Claw next appeared in the Brightest Day series in 2010-11. Hawkman and Hawkgirl (the resurrected Shiera) returned to their museum in St. Roch after the events of the Blackest Night. They were given a sapphire (actually a shard of the crystallized bones of Prince Khufu and Chay-ara) by Star Sapphire. These bones were part of the power source of the power battery for the Star Sapphires of Zamaron.
The jewel suddenly attached itself to the Claw of Horus and for the remainder of the story, the Claw served as a guide for Hawkman and Hawkgirl to find their Egyptian remains, Hath-Set, a place called Hawkworld and finally Zamaron. Hawkman never used the powers of the Claw that has been seen in the previous stories.
The last appearance of the Claw came in Dark Days the Forge, the prelude to the Metal series. In the issue, Carter Hall was trying to figure out what the Nth Metal is, and where its power is coming from. In one panel, he has a case of Nth Metal artifacts and one of them clearly resembles the Claw of Horus that appeared in Superman/Batman No. 4. That is the only time it appears in the series (as of Metal No. 3).
It should also be noted that during the Savage Hawkman series (2011-2013), Hawkman's armor had gauntlets that resembled the Claw of Horus, but it was never referred to by that name and his gauntlets themselves never had any special powers or abilities similar to the Claw's.

Over the last three days, we did a poll on our Twitter and Facebook accounts to see what the Hawkfans and other comic book fans thought of this weapon. It seems that fans who wanted Hawkman to use the weapon sparingly slightly outnumbered the fans who wanted it to be a regular feature of Hawkman's arsenal. With the possibility of Hawkman coming back during the Metal series, there could even be a chance that the Claw of Horus could tip the balance in the battle between the heroes and all those Dark Universe Batman Demon creatures. Whatever the case, it can be said that the Claw of Horus is sure to make another appearance in the story of Hawkman and Hawkgirl in the future.
Posted by Tim Board at December 17, 2017