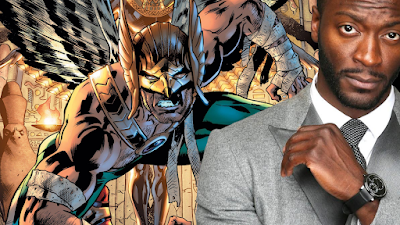 Black Adam is still months away from release, but slowly but surely we're starting to get some news, leaks, and comments about the movie. Last week, Black Adam producer Hiram Garcia talked about the battle between Black Adam and Hawkman. It looks like we'll be getting a huge fight scene. However, Hawkman is nowhere near Black Adam's strength levels, so unless they bring in the Claw of Horus, it will be interesting to see how they are going to pull it off. Various sites reported Garcia's comments, but Screen Rant surprisingly had the most detailed report. Black Adam Producer Hypes Up DC Movie's Hawkman Fight
Here's the Black Adam news collection if you want to catch up on all the Hawkman-related news from Black Adam!
Posted by Tim Board at November 09, 2021